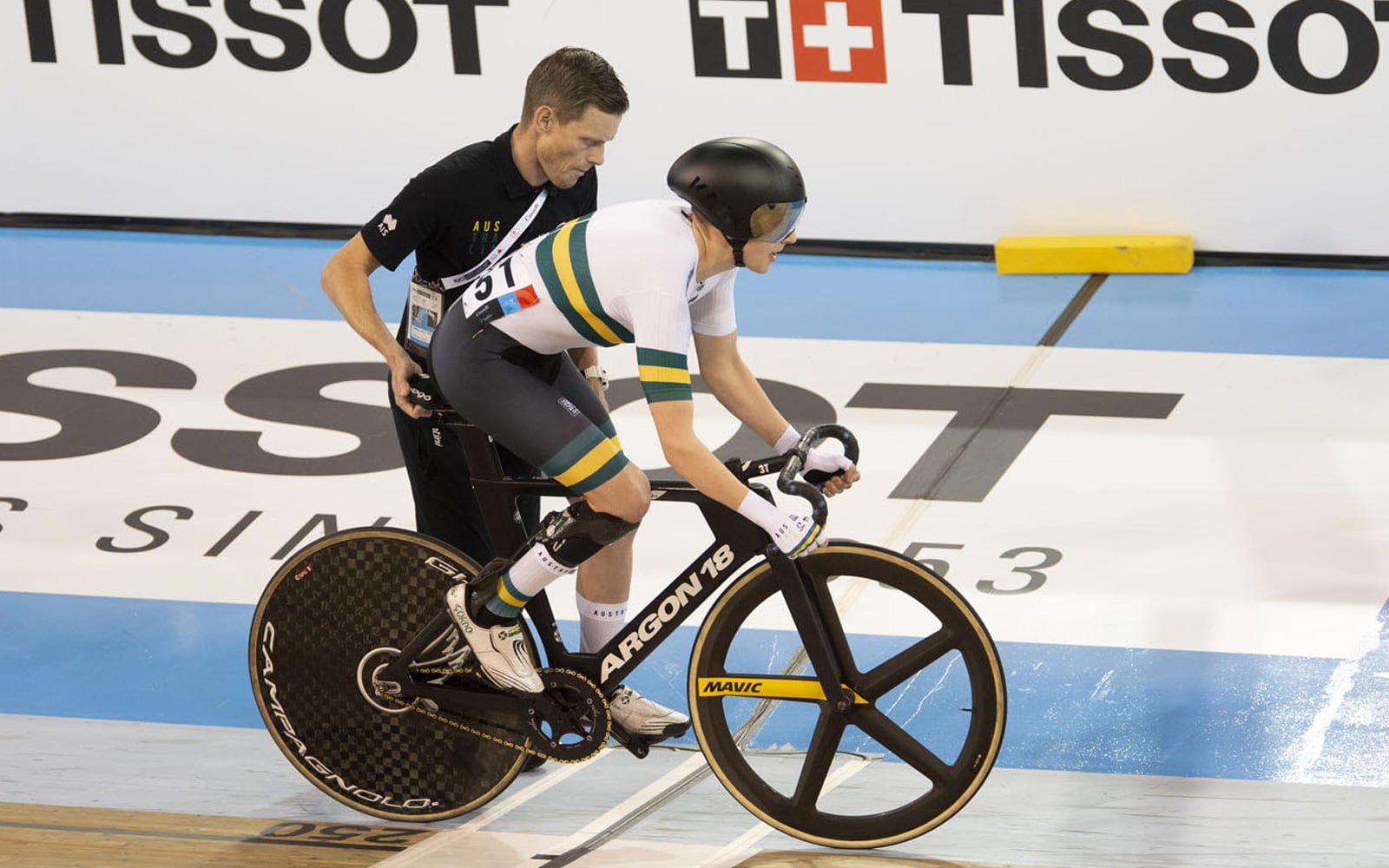 Gordon Allan is under no illusions. The rising star of Para-cycling knows, if he is to reach his goal of representing Australia at the Tokyo Paralympics, the pathway demands discipline and dedication.

It also requires a crucial piece of equipment.

“I have cerebral palsy in all four of my limbs but it’s a lot worse on my right side than my left,” Allan said.

“With cycling, one of the main techniques you need, obviously, is to be able to push down with your leg and through your ankle. With my CP, it affects my ankle quite a bit.”

When Allan began cycling seriously, around 2015, his parents paid nearly $3,000 for a brace that wrapped around the back of his leg from the knee to underneath his foot, enabling him to keep his foot straight on the pedal and extract power.

It was a revelation. Allan improved quickly and gained selection for the national Para-cycling team. Then, in mid-2018, Paralympics Australia’s head of performance solutions Keren Faulkner told Allan it was important for him to have a second brace in case something went wrong with the original while, for instance, he was competing overseas.

“Keren said there was a fund which could help – these things are pretty expensive – and it could be a way for me to get some high-end equipment that could help me on the bike and improve my strength and the way I ride,” Allan said. “So I applied and was very lucky to have it fully funded.”

In his first official competition with the new brace, about four months after he received it, Allan broke the world record in the 1 kilometre time trial in the C2 Classification.

If the 22-year-old from Sydney becomes a Paralympian, it will be testament to his hard work and talent. It will also be one of the many positive outcomes so far of the Para-sport Equipment Fund, which allowed Allan to purchase the essential equipment for his pursuit.

The Para-sport Equipment Fund is a joint initiative by Paralympics Australia and Sport Australia, supported by Paralympics Australia’s sponsors and donors. It aims to provide Australians with disabilities the chance to participate in Para-sport by addressing the costs of obtaining sport-specific and athlete-specific equipment. Its main focus is to support individuals and programs at the entry participation level. However, Para-athletes, such as Allan, and programs with a focus on higher levels of performance are also considered.

In the six rounds of the program so far, 105 grants have been provided at a cost of $1,050,000. Among the organisations to have received grants is Sydney Stars Boccia Club, which bought a boccia ramp, five sets of balls and two referee kits. The club now hosts regular training sessions and has introduced new players to the sport. The Murray River Razorbacks Wheelchair Rugby Association received a grant to buy five chairs with accessories appropriate for wheelchair rugby and the Torrens Rowing Club gained funding for adaptive sculling boats, oars and boat carts. Among individuals who have received a grant is West Australian Emily Prior, 13, who had been using her regular day chair to compete in athletics, but now has a racing chair.

“The public perception of Paralympics Australia is most often entwined with high performance sport,” said Tim Matthews, a three-time Paralympic gold medallist who oversees administration of the Para-sport Equipment Fund.

“But part of the charter of the organisation is to grow participation for people with an impairment.”

“In athletics, we’ve distributed a number of seated throwing frames to enable athletes with leg impairments to sit and compete in throwing events. These have been popular with local athletics clubs,” he said.

“Then you have the wheelchair sports – rugby, tennis, basketball – which require sport-specific chairs for participation – some for individuals and others for a community program, which can be shared among a group of players.”

Funding has been provided for a hoist for equestrian, sideboards for five-a-side blind football and tandem bikes for cycling. Para-ice hockey sleds and sit-skis have been distributed to athletes and programs.

“These might not necessarily be top-of-the-range pieces of equipment in many instances,” Matthews said. “But they’re critical for someone to get involved and participate from the entry level of the Para-sport pathway, particularly in sports where customised or adapted equipment can be expensive.”

The idea for a Para-sport Equipment Fund stemmed from discussions between Matthews and Paralympics Australia chief executive Lynne Anderson about the barriers to participation faced by people with an impairment, including accessing and purchasing equipment beyond what an able-bodied athlete might require.

“The NDIS does play a role in this space for some individuals,” Matthews said. “But there are still significant gaps, depending on the nature of the impairment and the sport the individual may wish to play.

“So, we worked on a proposal for Sport Australia and it was fantastic to see them come on board with $1 million.”

Paralympics Australia rolled out an application process for individuals and programs, including those run by clubs and state and national associations.

“Some requests have been quite significant, particularly given some applicants don’t even know if they like the sport – they haven’t tried it due to not having the required equipment,” Matthews said.

“In those situations, we’ve generally supported clubs or associations, with some individuals receiving priority access to sample the sport before committing to it. Additionally, the program has supported a number of the state sporting organisations and disability sports organisations throughout the country, who often conduct Para-participation programs in metropolitan and regional areas.

“Every application is unique and there’s a lot to consider, including freight and other factors such as storage. We’ve also had a few issues with some suppliers, but we’ve learned a lot through the process for the future.”

In Gordon Allan’s case, the situation was fairly straightforward. His new leg brace was purchased through the organisation who he had previously worked with and it was made the same way, with a few additional features.

“We fine tuned it a bit initially, but it was a pretty seamless transition and within a couple of weeks it felt pretty much the same as the old one, but better,” Allan said.

“Paralympics Australia were really good about it. After providing the funding and approving the supplier, they followed up and let know that if I needed any further guidance they were there to help.”

In return, as with all successful applicants, Allan has reported back to Paralympics Australia about how the equipment is being used and the value it’s added.

“The assistance they’ve given me has been really important and will genuinely make a difference to my performance,” he said.

“A piece of equipment like that, I probably wouldn’t have been able to afford it. Being an athlete, I don’t work full time. That side of things – to help me reach that next level, to have that support from the national body – it’s been a huge change for me and the way I perform. It’s been vital for me to be able to take that next step.”

Breaking a world record so soon after getting his new brace gave Allan the belief that he can achieve anything in Para-cycling.

“It showed me that I could trust this piece of equipment, something I use day-in, day-out,” he said.

“After four years of using the old brace, changing such a key part of my equipment, I had to trust it would do the job I needed it to do. To get that result straight away was really confidence-boosting.

“We’ve got another couple of qualification events coming up soon and I’m hopeful I can prove that I deserve a spot on the team for Tokyo.”

Paralympics Australia is working to address the high costs facing participants and their families looking to get involved in Para-sports. We’re now asking for your support. We are accepting new financial contributions to our Para-sport Equipment Fund. You can help change lives through Para-sport. For more information, please contact us today.