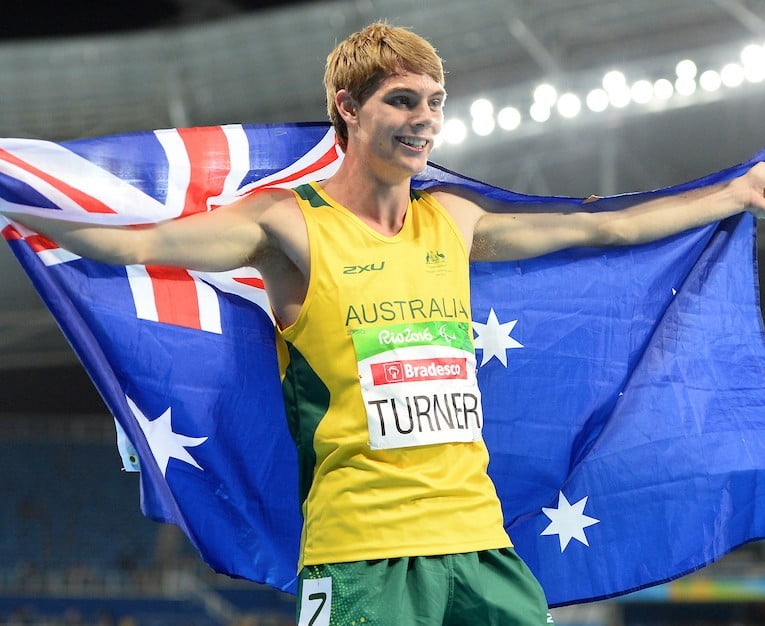 The Australian athletics team enjoyed its biggest daily medal haul – five – on the last day of competition in track and field at Rio’s Olympic Stadium.

A gold to James Turner in the T36 800m; silvers to Isis Holt in the T35 200m and Madison de Rozario in the T53 800m; and bronze for Kath Proudfoot in the F36 Shot Put and Louise Ellery in the same event for her F32 class, shot Australia from 19th to 13th on the Athletics medal tally.

Australia finished the track and field events with 3 gold, 8 silver and 14 bronze for a total of 25 medals. That actually put the Australians at equal 5th with Germany for the most medals won in the sport over 10 days of competition.

Of course the athletics medal tally for Australia could increase slightly if either Kurt Fearnley or Christie Dawes taste success in Sunday morning’s Marathon at Copacabana Beach, ahead of the Games Closing Ceremony that night.

So it was a day worth celebrating, especially for the likes of 20-year-old Turner and 15-year-old Holt, who represent the future of  para-athletics in the lead up to the 2017 London world championships and the 2020 Tokyo Paralympics. You can throw in the 12 disability events on the 2018 Gold Coast Commonwealth Games program as well.

Turner was a member of the Australian Pararoos 7-a-side team for cerebral palsy footballers. He was the FFA (Football Federation of Australia)’s player of the year with a disability in 2013.

But the team didn’t qualify for the Rio Games. And Paralympic talent scouts spotted Turner’s speed and running style and asked him if he wanted to switch sports.

“I wanted to stick to my splits that my coach Robbo (Brett Robinson) has taught me to do and I knew if I did that I could pull it off,” Turner said of his startling time of 2min:02.39sec which broke Russian Evgenil Shvetsov’s world mark of 2:05.05.

“I thought I’d run fast but not that fast. I’ve trained in athletics since I was about eight years old and always been very competitive with my twin sister Hayley. She was always better than me and that pushed me harder to get better.”

Holt also impressed today claiming the 200m in her T35 cerebral palsy class, backing up the 100m silver from Wednesday. Both times she lost to Chinese sprinter Zhou Xia. The only downside was that Zhou broke Holt’s 200m world record (28.30sec) with a 28.22 to take gold today.

“But my 100 metre world record is still intact, so we’re even,” Holt said.

The 15-year-old rounded the bend and actually drew level and then briefly past Zhou  at the top of the home straight. But Zhou put the pedal down a second time and Holt could not go with her.

“I tried to get her again but I couldn’t. Still the feeling of crossing the finish line is better than I could ever have imagined,” she said, vowing to work on the back end of the 200m – her favourite of the sprint double – as she grew in strength and experience.

“You never know what to expect in racing, especially at a Paralympics and my first Games. Before now I never truly believed I understood that.

“So this is a good wake-up call for me leading into the next Games. The next goal is the London worlds (2017). And hopefully things get bigger and better from there.”

Proudfoot, 39, is not so sure if she will be off to a fourth Paralympics in Tokyo in 2020.

“It’s been three Games in a row with all the international competitions in between it’s been pretty non-stop,” she said. “I’ll take a break to re-group and then I’ll still have plenty of time if I decide to go on to Tokyo.”

For the moment she is very proud of her hat-trick of Paralympic medals: silver in discus in Beijing 2008, bronze in discus in London 2012, and bronze in shot put in Rio 2016 today.

“I’m pretty happy with that. The standard  has always been high but we’ve seen at these Games across the board the standard lift again.

“And that’s really good because it keeps you motivated to keep looking at your technique and see what you can improve on for next time.”

De Rozario followed in Holt’s footsteps by taking home two Rio silver medals in her luggage – the 4x400m relay from Friday and the 800m in her wheelchair class today. Teammate Angie Ballard was fourth, but has won three medals in Brazil – bronze in both the 100m and 400m and the relay silver.

“My goal was to have a good start and that didn’t quite work out. But a lot of catch-up work and then a panic sprint for the finish line and here I am,” she said.

“The relay medals I’ve won are incredible as we have a really good team. But I’ve never won an individual medal at a Games before and this is my first Games. So it’s special.”

Ellery showed consistency with her international results too. Her bronze in her cerebral palsy class Shot Put followed a silver in London four years ago and a bronze at the World Championships in Doha last year.

In other results today, Jemima Moore was 5th in her T54 800m wheelchair heat and missed the final by two spots – 10th fastest overall.

After 5th  in the javelin three days ago, Rae Anderson was eighth in the discuss today for her F38 cerebral palsy class.

And Brianna Coop finished 5th behind Zhou and Holt in the 100m. Bronze when to Britain’s Maria Lyle.