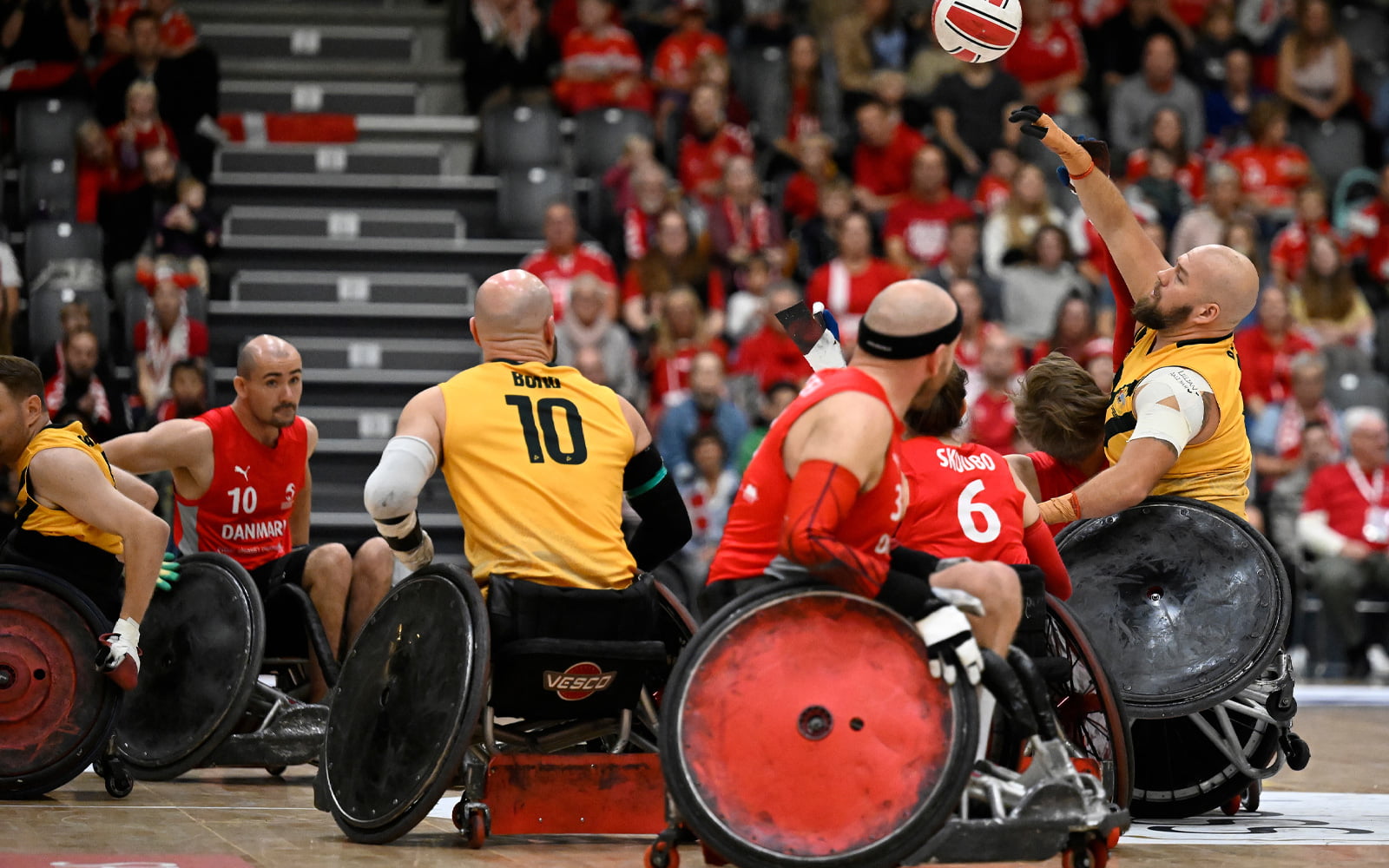 The Australian Steelers have secured their place in the gold medal match for the fourth consecutive World Wheelchair Rugby Championship.

The Steelers defeated Denmark 56-55 in an enthralling semi-final battle on Sunday, in front of a sold-out crowd in the Danish city of Vejle.

The Australians will face the United States on Monday for the right to be proclaimed the world’s best once again, after winning gold in 2014 and taking silver from the 2018 and 2010 deciders.

“If we can win this tournament, we can go in the history books as one of the best ever,” Australian captain Chris Bond said. “That’s what we’re aiming for.”

If the final reaches the tension level of Sunday’s semi-final, Australian Steelers’ fans are in for a wild ride.

After neither team conceded a turnover in the first half and scores were locked at 28-all at half-time, the Australians finally forced errors from Denmark in the third-quarter to gain a two-goal buffer which they held until the game’s final two minutes.

But as the Australians watched on aghast, the host nation swung the momentum back their way to send their fans into a frenzy in the dying stages.

Unwilling to relent and backed by the home crowd shaking the stadium with drums, horns and vocal support for their team, Denmark snatched two turnovers and immediately looked confident enough to orchestrate a miraculous comeback.

With the margin level, and then back to one, the hosts threw everything they had at the Steelers in the final minute. Steelers star Mick Ozanne said the pressure was hard to bear.

“Once that second turnover happened, the nerves just shot through. It was tough. But it won’t happen in the final,” Ozanne said. “We can beat anyone here, we’ve shown that.”

“It’s an awesome feeling. What this team has achieved has been amazing. We came here as underdogs and we’ve shown everyone that we’re still one of the best teams in the world.”

The Aussie Steelers will face USA in the Gold Medal Match following a 56-55 semi-final win over host nation Denmark at the #2022WRWC.

Cheer on the Steelers as they go for gold at 1am (AEDT) on Monday 17 October – watch live: https://t.co/145V9WA0Lt pic.twitter.com/Bg6HwEmQr2

Although it wasn’t flawless, the one-goal thriller was a performance that highlighted the Steelers’ mental toughness that has been a key feature of their 2022 campaign so far.

“We thought about everyone back in Australia watching us. The crowd here was a sea of red and white but we knew our family and friends were getting out of bed at 2am to support us, and that meant something to us,” Bond said.

“There were only five turnovers from both teams in the whole game. That is high quality, clean rugby at the highest level and that’s why we do it.

“Wind the clock back three months, no one else gave us a chance at this tournament. Everyone was saying that Australia was gone. But we got together as a team and told ourselves that there were no more excuses.

“We had some really open and honest conversations about what we wanted to do as a team, what we believed in, what our values were, and it has paid off in spades.

“This is just the start. We want to win this tournament and then push it all the way to the Paris Paralympics.”

Before they get to Paris in 2024, waiting for them in Vejle ready for yet another massive battle will be their long-term nemesis, the United States.

The two rivals have a storied history in major championships.

The Americans trounced the Steelers in the 2010 World Championship final and the Paralympic finals in 2000 and 2008.

But in what is still widely regarded as the best wheelchair rugby match of all-time, the Steelers triumphed over the Americans in a double overtime epic at Rio 2016 to claim the Paralympic gold medal with a one-goal victory,

Both teams enter the 2022 final on the back of strong semi-final victories but one loss apiece in the pool rounds earlier in the tournament.

Australia will battle the United States for 2022 World Wheelchair Rugby Championship gold medal at 1am on Monday (AEDT). Denmark will face the Japan for bronze medal at 10:45pm on Sunday (AEDT).