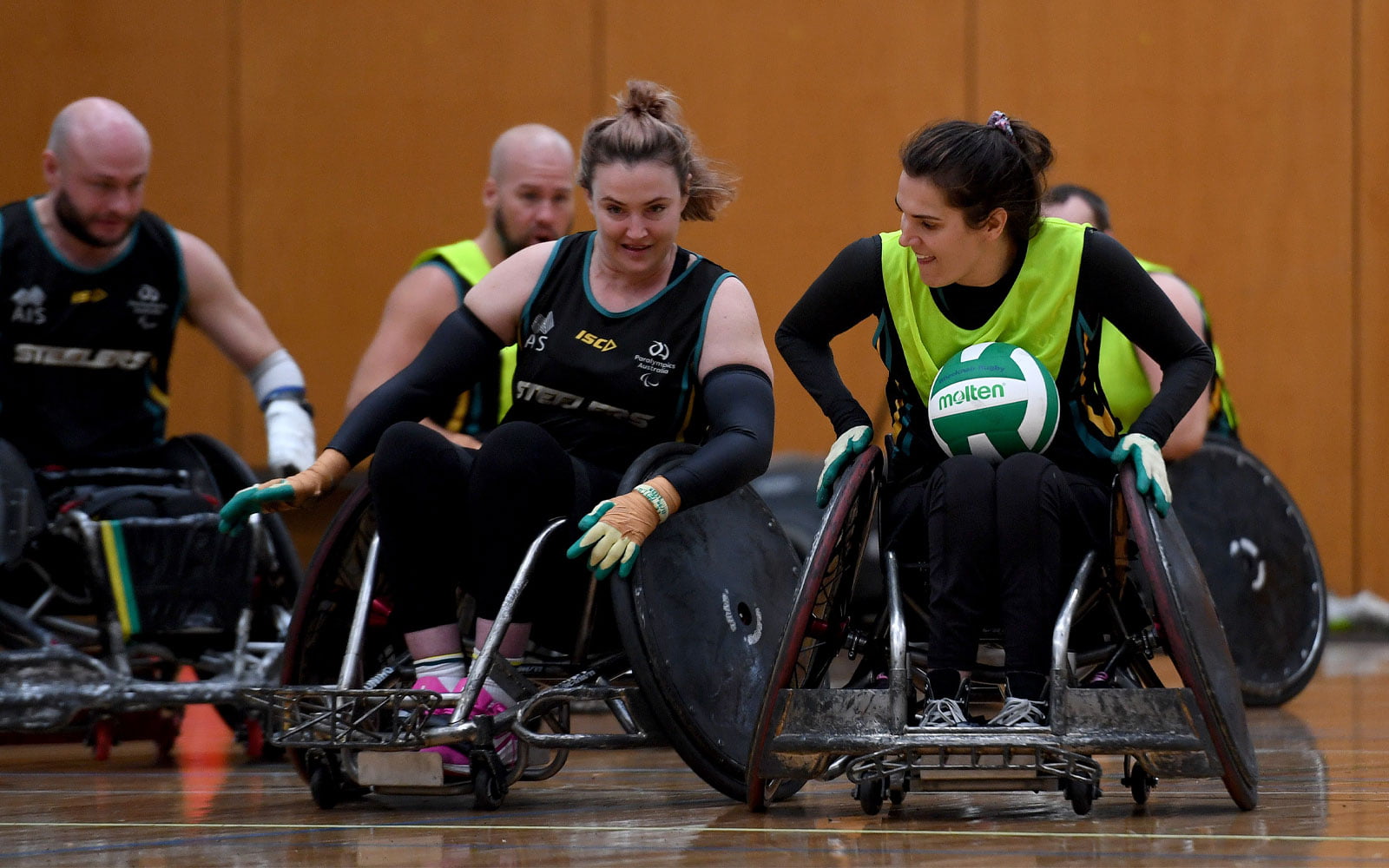 Emilie Miller and Ella Sabljak are ready to follow the trail blazed by Shae Graham and provide a strong and important female influence on the Australian Steelers’ future.

The Steelers will feature three females for first time in their 12-athlete squad at next month’s Wheelchair Rugby World Championship in Denmark.

Wheelchair rugby is a mixed-gender sport, and while most athletes at international level are males, the impact of female athletes is playing an increasingly critical role in determining medals at major tournaments, according to Australian Steelers Head Coach Brad Dubberley.

With each athlete’s impairment classified between 0.5 and 3.5 points, teams must field four players on court without their total number of points exceeding 8.0. Female athletes are given a 0.5 bonus, meaning Miller (0.5), Sabljak (2.5) and Graham (2.5) provide the Steelers a total of 1.5 points of extra function within their squad.

With a wider variety of line-ups at his disposal, Dubberley believes the female trio will be instrumental to Australia’s chances in Denmark and their hopes at the 2024 and 2028 Paralympic Games.

“I think moving forward that to win the Paralympic gold medal in LA [2028], the best teams will need four females. That’s our objective to get to that point, because I see that’s how it’s going to be won,” he said.

“Japan at the 2018 World Championships had low-point females on their team when they won gold and so did Great Britain in Tokyo when they won their first gold medal. For us, Shae has given us more mobility as a mid-pointer and we know other countries are looking for that option too now.”

Since becoming Australia’s first female Steeler in 2019, Graham has made 45 international appearances and was one of the strongest performers during their Tokyo Paralympic Games campaign last year.

Miller said Graham’s mentorship had been invaluable and has enabled her to make a smooth transition to elite wheelchair rugby after a successful Para-cycling career in which she became a multiple world champion hand cyclist.

“What an absolute weapon to follow, Shae is just unreal and matches up against the men so well, I’m so happy to be following her example and to be part of the movement to bring more females into the sport,” Miller said. “I think it’s a real positive for the sport and our team.

“It is something that I take a lot of pride in, the fact that we’re part of this era where we’re changing the game domestically but also internationally in terms of the higher representation of female athletes.”

Miller is one of four 0.5 athletes selected, joining veterans Ben Fawcett (164 matches), Mick Ozanne (156 matches) and rookie James McQuillan (three matches) as the foundation on which the Steelers’ will build their World Championship campaign.

“Between Mick and Ben, they have a wealth of knowledge between the two of them and long history of international representation so it’s always good to be able to chat with them,” Miller said.

“They are always forthcoming with information as well which is really helpful. To be able to learn from them on the court but also ask questions off the court is really important and to have that mentorship is so positive. At the end of the day, it helps us so much as a team to grow stronger when we’re prepared to help one another and share information.”

For Sabljak, the World Championship will continue a rollercoaster period since making the move from wheelchair basketball to wheelchair rugby.

“Everyone in the Steelers program have been so welcoming which has been really helpful since making the transition,” Sabljak said.

“It’s tough [playing wheelchair rugby], I’m learning lots because there is a lot to take in. It’s a new style of play but I’m figuring it out and having fun.

“In basketball, there is much more focus on distributing the ball before contact [from the opposing player] but in rugby they want to hold onto the ball, take the contact, pass the ball.

“There are fewer predominant ball-handlers in rugby so that has been a huge mindset shift. It’s been exhausting but I’m enjoying the challenge.”