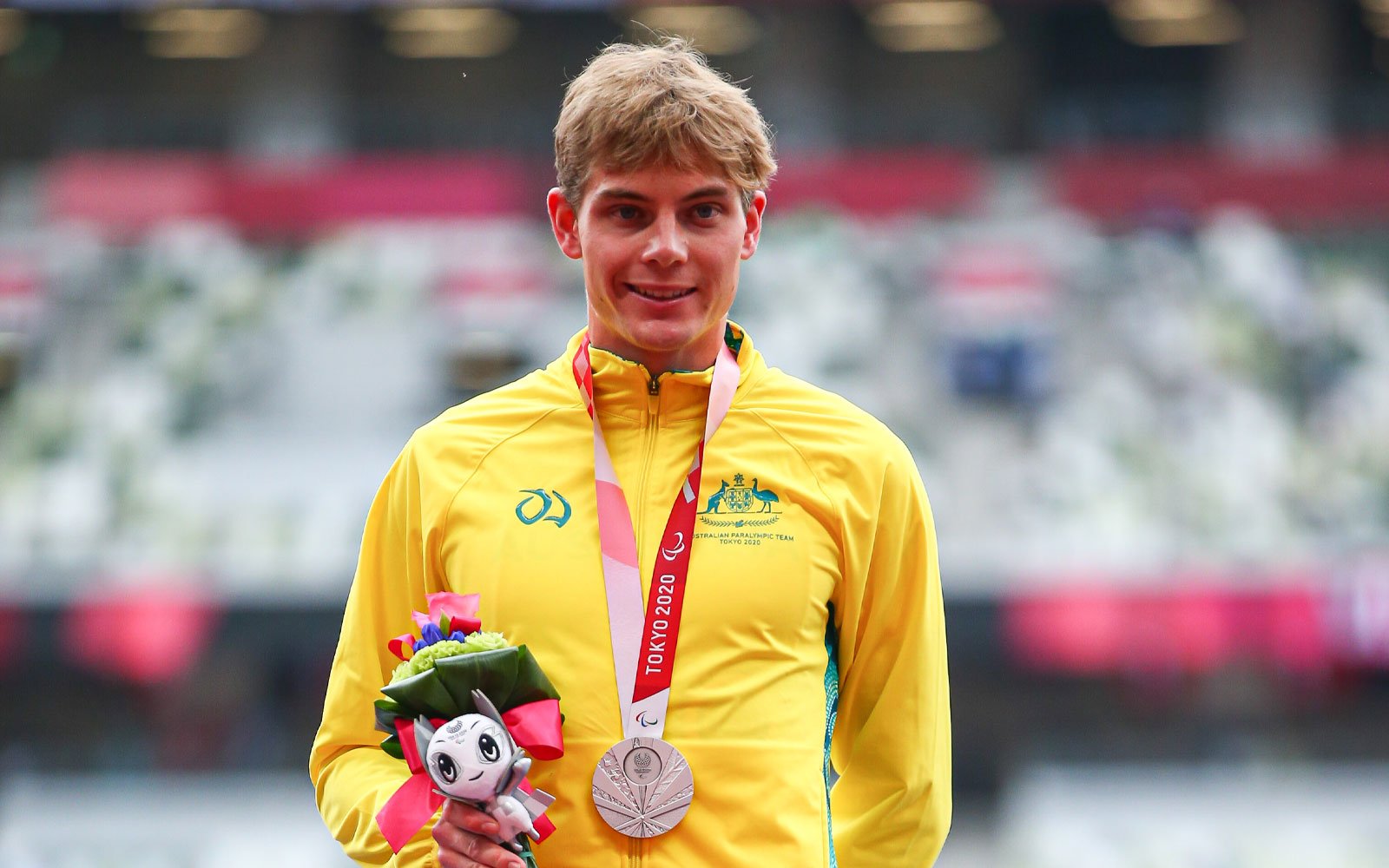 Australia completed its final day of track and field events at Tokyo’s Olympic Stadium on Saturday with a silver and two bronze medals to bring the total over nine days to 17.

Only the Marathon on Sunday morning is left to wind up an extraordinary Paralympic Games.

James Turner (100m T36) with silver, Nicholas Hum celebrating the birth of his daughter five days ago – while he was in Tokyo – with a bronze (Long jump T20), and Deon Kenzie (1500m T38) making it medals in the last six majors (four Worlds, two Paralympics) with bronze, felt the love from the large squad of Australian supporters in the stands.

Medals are always welcome but sometimes they don’t go to plan.

World record holder and fastest qualifier in his 100m (T36), Turner, seemed a sure bet to repeat his gold medal from the 2019 Dubai World Championships in the Paralympic arena.

The 25 year-old had been undefeated since 2016 – gold in Rio, more golds at two world championships, then (400m) gold in Tokyo, for seven straight renditions of ‘Advance Australia Fair’.

But in Japan he experienced the basic tenant in sprint races: you miss the start, you lose.

Turner made a slightly earlier mistake – he felt the Malaysian athlete Mohamad Puzi on his left move slightly and checked himself, which made him miss the gun.

“It’s my first loss and it’s a bitter taste but I’m going to grow from it,” he said, despite making up ground from fifth to second over the final 70 metres.

Australian officials reviewed the race footage, as they initially felt a protest was warranted. But on reflection since Mohamad Puzi did not medal, it was decided not to lodge a complaint.

And that’s a decision Turner is comfortable with.

“Look it was my mistake to let Mohamad Puzi’s jump get to me. To go out and get him DQ-ed when he didn’t even medal, I think would be beneath me I guess. I wouldn’t want that.

“It’s hard to learn that lesson in a Paralympic final but I’ll take it on the chin and get ready for the next one. I won’t let it get to me next time.

“I am extremely disappointed but I am absolutely going to train hard, as I need to work on my focus a bit more so false starts don’t distract me any more.”

For Hum he can’t wait to hold baby Holly, who was born two days after he arrived in the Athletes Village. He and his wife Mairead knew the birth would happen while he was away.

“It was hard not to be there. I’m going to give her such a big hug when I see her.”

It was a mutual decision by both parents for Hum to compete at his second Paralympics – he finished 5th in Rio. The couple also have a son, William.

“It’s been a big dream of mine – so to be here now and actually medal, it’s like I’m floating,” he said after a season best 7.12m.

He pulled his right hamstring on his sixth and final jump but with his first international medal around his neck, he wasn’t feeling much pain.

“My jumps felt great. I wish my hamstring hadn’t blown up on the last one as I felt that could have been a really good one.”

As it turned out his fourth leap secured him the medal – something Holly will have for a wonderful ‘show and tell’ at school in a few years.

“I’ve had a lot of help and support to come this far,” he said, wanting to thank two in particular: coach John Boas and Mairead.

“I just want to say to my wife ‘Thanks for everything. You’ve been massive through all this. You’ve been amazing’ – I just love her to bits,” Hum said.

“It’s so great to have Dan on the team… he’s still so young. He’s got so many more Games in him so to see his progression over the last 12 months has been incredible. I love Dan – and who knows maybe he’ll be challenging me for that medal spot soon,” Kenzie said.

Bounty said just walking out into the stadium gave him goose bumps.

“There might not have been any crowds but the atmosphere was electric,” Bounty said. “I just felt like everyone was there watching. It was insane.

“As for my race plan I ran the first lap kind of relaxed and then tried to chase a few people down, which I did. It wasn’t a PB but sixth place at the Paralympic Games is unreal.

“I set myself a goal when I came here to better Jaryd Clifford’s first Games effort (Rio) in the 1500m and he came 7th so you beauty!”

Kenzie is only 25 so he’s far from done either.

“This medal means so much because if you look at the progression in our category over the last five years, you can see how many great runners are out there. So to still come away with a medal…. And I know how much hard work went into this one.”

The London 2012 gold medallist, Ireland’s Michael McKillop, finished 8th and was in tears under the stadium post-race.

“He’s been a real beacon in our category but to see him beaten is sad on one hand, but it shows the ability and not disability that we all have.”

“I was more comfortable in the final than the heat,” he said of his season best time, or 0.41s faster than he raced in the heats.

“Maybe I gained some fitness overnight because I felt the final was a little slower. Anyway it’s where I thought I would finish after what I did at Worlds.”

“I’m happy with that but I do wish I had a bit more kick at the end, but that’s where I didn’t quite have the endurance as I’ve been focusing on the 100 and neglected the 800 a bit.”

McCracken won silver on Monday in the sprint, so he’s now wrapped up his third Paralympic campaign. Next on the agenda will be the 2022 World Championships back in the Japanese city of Kobe.

“I’ll keep working hard but first, get home, get through quarantine, because I really can’t go anywhere. My family is up in Queensland (Bundaberg) and my partner is in Victoria. At least the dog will be there to say hello (in Newcastle),” he said.

In the remaining finals on Saturday, Rhiannon Clarke again equalled her personal best 1:02.65 in the final of the 400m (T38) – clocking the same time in Friday’s heats.

But the eight women had to endure one of the heaviest downpours of the night right in the middle of the race. Clarke left the track saturated from head to toe.

“It was actually kind of fun, kind of different. I wish I’d run that little bit faster but it’s setting me up for Commonwealth Games next year – I want a medal there,” she said.

In the last women’s field event of the night, one of three indigenous athletes on the Australian team – Samantha Schmidt – finished 6th in the Discus throw (F38) with a throw of 30.26.

“I am pretty much over the moon. I’m really happy with how I threw – I couldn’t have done any better considering the conditions,” Schmidt said as intermittent rain and showers had competitors using towels to try to stay dry and warm.

“You just have to make sure you don’t overthink it in worrying about the wet. You just keep your mind clear and throw. And that’s what I did,” she said.

“I’m not sure if next year’s world champs (due in Kobe, Japan, in August) will have my event, but if they do, look out because I’m coming back.”