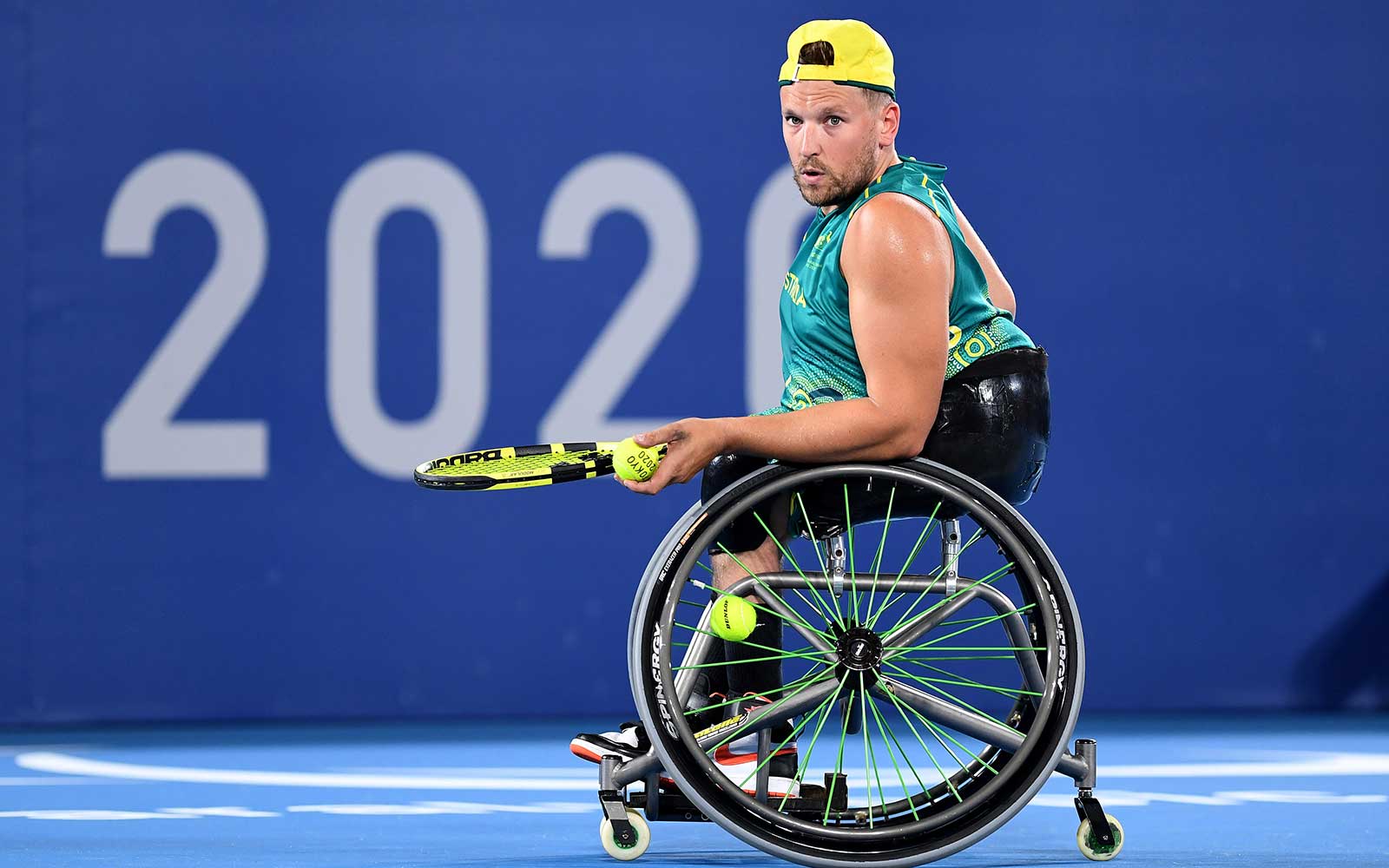 UPDATE: Dylan Alcott’s wheelchair quad singles final against Sam Schroder will not be played as originally scheduled on Thursday. A combination of inclement weather, and backlog of matches on the centre court, has seen tournament organisers push the match to 11am AEST on Saturday.

New York can wait – that is next week.

Apparently, Dylan Alcott didn’t even know what a ‘golden slam’ was until recently.

Everyone apart from the quad singles world no. 1 wants to talk about it – the fabled Paralympic /Olympic year where there is one extra big title on offer.

And who can blame Alcott for being a little confused? We are in the calendar year of 2021, yet an event branded with the numerals of the previous year, is grouped into this body of success.

Not to mention to the fact the US Open has already started before a Paralympic medal has even been decided at Tokyo 2020.

Melbourne – tick. Paris and London – tick and tick. It’s three from three at the majors for Alcott this year and the plane is heading to Flushing Meadows straight after the closing ceremony.

Dutch world no. 2 Sam Schroder stands in the way of the Australian claiming back-to-back singles gold medals in Thursday’s decider at Ariake Tennis Park, and hence, is Alcott’s next hurdle in the continued narrative of the ‘golden slam’.

The 21-year-old Dutchman has become a familiar foe in both singles and doubles, with the pair to battle for another gold medal only 24 hours after being on the other side of the net in the doubles final.

And as is the case for most in the small elite quad tennis fraternity, they have also played together, including being beaten in the doubles finals at the French Open and Wimbledon this year

In singles, Schroder and Alcott have met in the four of the past five major finals, with the Australian winning on three occasions, to boost his head-to-head record to eight wins from 10 encounters.

Schroder has split hand / spilt food syndrome, and has also overcome colon cancer, to become yet another star from the Netherlands wheelchair tennis factory.

Along with beating Alcott on debut at the majors at the 2020 US Open final, the young Dutchman defeated the reigning gold medallist two meetings ago, at the French Riviera Open in June.

Alcott claimed their most recent encounter, in the Wimbledon final 6-2, 6-2.

The ‘golden slam’ has become a huge talking point at the Tokyo tournaments, starting with men’s world no.1 Novak Djokovic’s failed bid at the Olympics, where he was beaten by eventual gold medallist Alexander Zverev in the semi finals.

In the women’s open wheelchair class, another player from the Netherlands, Aniek van Koot, has made the last four in her quest for the rarest of grand slams.

A wheelchair tennis player has never won the ‘golden slam’, meaning Steffi Graf’s 1988 achievement still stands alone in the history of the sport.