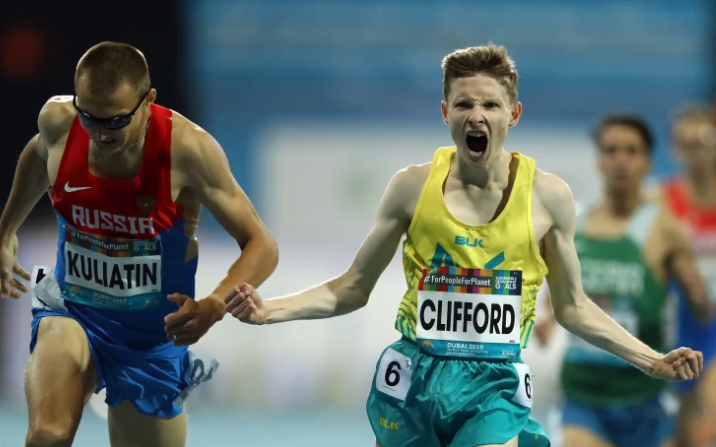 Middle-distance runner Jaryd Clifford kicked off Australia’s campaign at the 2019 World Para-athletics Championships in the best possible way, winning gold in the men’s 1500m T13 on the opening night of finals in Dubai, UAE.

The 20-year-old vision-impaired athlete from Victoria ran a fine strategic race, sitting behind Russia’s Anton Kuliatin until the 1100m-mark, when the bell sounded for the final lap.

Euphoria in the Australian camp quickly turned sour when Clifford’s training partner Michael Roeger was the subject of a protest in the men’s 1500m T46 final.

Roeger crossed the line in second place to Bulgarian Hristiyan Stoyanov, but then found himself disqualified due to a protest. At the time of writing, Australian officials had lodged an appeal, which was being heard late into the night by International Paralympic Committee (IPC) technical stewards.*

Meantime, Clifford held onto his lead as the push came from Kuliatin (silver) and Algeria’s Abdellatif Baka (bronze) down the straight.

“I heard them coming and I thought I was going to get caught. I was thinking I might have gone a bit too early and may not have enough gears over the last 100m.

“But when I crossed that line, it was an unbelievable feeling – a crazy feeling. I just couldn’t believe it. I just screamed.”

Clocking 3:47.78, Clifford shaved 0.11 seconds off his own world record set in Sydney, NSW, in April this year.

“I didn’t have a clue until a couple of minutes later. It makes it a slightly better feeling. But in a Championship race you just want to get to the line first.”

Clifford was 7th in the 1500m final at the Rio 2016 Paralympic Games and took bronze at the 2017 World Championships in London, England.

And now it’s a gold medal and a world title.

“I’ve been waiting for this moment since I can remember. I’ve seen my training partners win gold medals and I wanted to join them.”

Clifford’s parents Gayle and Damien were trackside in Dubai to see their son get the breakthrough he’s wanted in his relatively short career.

And he did it without wearing his traditional running goggles, which help shade his eyes.

“I would have run in them, but at our squad training camp in Barcelona, Spain, last week, they got stolen.”

Carter dead-heated with China’s Liu Yang (13.98) in the second semi-final after Bailey finished third in the first (14.44).

“I knew it was either first or second, but it doesn’t get much closer than that,” Carter said. “That’s what you want – those races neck-and-neck the whole way. It was awesome.”

The very next event – the women’s 100m T54 – and Eliza Ault-Connell made her return to the World Championships for the first time since 2006, forcing her way into Friday’s final by placing second (16.73) in her heat.

“It’s been a long time between drinks…it’s been a few years but it’s so good to be back.”

Ault-Connell left the sport in 2008 to have a family. Three children and 10 years later saw her return and win silver in the women’s marathon T54 at the 2018 Commonwealth Games.

And now she is back in the thick of a race for world titles medals again. She won 400m silver at the 2002 World Championships and 800m bronze in Assen, Netherlands, in 2006.

Australia qualified for a third wheelchair final on Friday night – day two of competition – when Angie Ballard finished third in her heat of the women’s 100m T53.

* Roeger has since been reinstated to silver.

By Athletics Australia
Posted: 08/11/2019
Photo with thanks to Getty Images