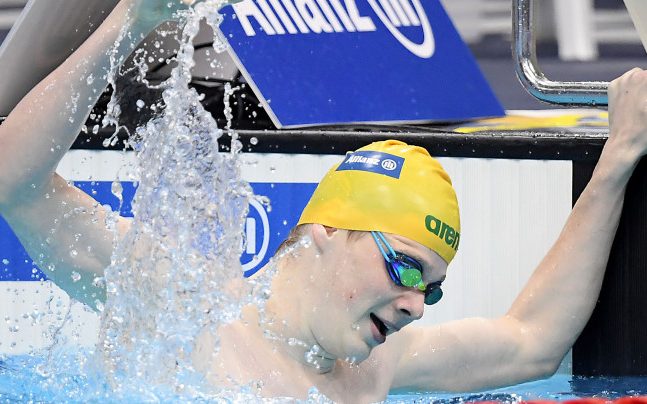 Western Australia’s Popham produced the Dolphins’ first piece of silverware on night one, after powering his way home in the men’s 100m freestyle S8 final to snare second spot. In his debut outing at a World Championships and with his family proudly sitting in the stands watching on, Popham smashed his personal best to clock 57.89. It was an extremely tight finish as the 19-year-old beared down on Greece’s Dimosthenis Michalentzakis, who ultimately touched for gold in 57.69.

Elated with his result, the 19-year-old said the podium finish and a personal best time was still sinking in.

“I feel incredible,” Popham said. “I really found out what I could improve on in the heats and I nailed exactly that. I went out a little bit harder, but came home just as strong – I’m stoked, absolutely stoked.”

“I wasn’t expecting to do a PB [personal best]. I was hoping for a 58-mid which has turned into a 57-high, so I’m really surprised and probably in shock a little bit.”

Cairns’ Patterson claimed Australia’s second silver medal of the night, posting a new Oceania record time of 1:00.76 in the men’s 50m breaststroke SB2. Going head-to-head with his Mexican counterpart, Arnulfo Castorena came out on top in 57.24.

“It was good,” Patterson said. “I had a good heats swim and then the final went a bit faster tonight, so it was a great swim and I’m happy with a silver medal.

“It’s a great feeling to represent my country and come back here and win a medal.”

A red-hot Crothers picked up a bronze medal after placing third in a frenetic men’s 50m freestyle S10 race. In a nail-biting and blanket finish, the Yeronga Park product touched the wall in 23.72, only 0.01 behind the silver medallist, Brazil’s Phelipe Rodrigues (23.71), and 0.09 behind the gold medallist, Italy’s Stefano Raimondi (23.63). Earlier in the day, fellow Dolphin and rookie, William Martin, posted a personal best of 25.80 to narrowly miss out on the final and finish ninth overall.

“I’m super stoked with that swim,” Crothers said. “It’s not quite a PB, just a little bit off, but I’m really focussing on the process of how I’m swimming it, and it felt good, so I’m happy.

“I’ve done a lot of hard, consistent training back home, and over the past few months I’ve really upped my commitment and really just going all in, and it’s paying off.”

Rookie Ella Jones was delighted with the race she put together in the final of the women’s 100m freestyle S8. After recording a new personal best of 1:09.80 in the heats, the young Dolphin wasn’t far off producing her best again in the final, with the Springwood athlete placing seventh overall in 1:10.15.

“It was so surreal,” said Jones, fresh from the pool. “I’ve never experienced anything like that – to walk out and have everyone yell for me, it was absolutely amazing.”

“To swim two of the fastest swims I’ve ever done today is great, and I’m really happy with the result.”

Australia had three representatives in the men’s 200m freestyle S14 final, after Liam Schluter, Ricky Betar and Jack Ireland all posted competitive qualifying times during heats. Swimming from lane four in the final, Schluter finished fourth overall in 1:56.24, while Betar – who scored a personal best this morning – placed sixth in 1:57.46, and Ireland, eighth in 1:58.86. Local swimmer Reece Dunn (GBR) won the gold in a world record time of 1:52.96.

Swimming from lane six, Paralympic gold medallist Tim Disken hit the wall in 57.01 to place fifth in the final of the men’s 100 freestyle S9. He had tough competition, with Simone Barlaam (ITA) claiming the gold in a new world record time of 54.10.

Ellie Cole and Lakeisha Patterson placed fourth and fifth respectively in the women’s 100m freestyle S9 final. Posting times of 1:03.33 and 1:04.60, in true Australian spirit, the pair fought hard and showed their class all the way to the end.

In the women’s 50m freestyle S10, Jasmine Greenwood placed sixth in a time of 28.97 and Keira Stephens touched for eighth in 29.39. The following race saw Queensland’s Braedan Jason set a new Oceania record in the men’s 400m freestyle S12. Clocking a time of 4:11.10, Jason bettered his own record he set in February by nearly six seconds to place fourth overall.

Clocking personal bests was a common theme on night one, with Auburn swimmer Jenna Jones also shaving a huge four seconds off her personal best in the women’s 400m freestyle S13. Hitting the wall in 4:51.35 saw her place seventh in the final.

In the final event for the Australians on night one, Tiffany Thomas Kane finished fifth in the women’s 50m butterfly S7 in a time of 37.27.

After the first night of the competition, Australia sits 14th on the medal table, with two silver and one bronze.