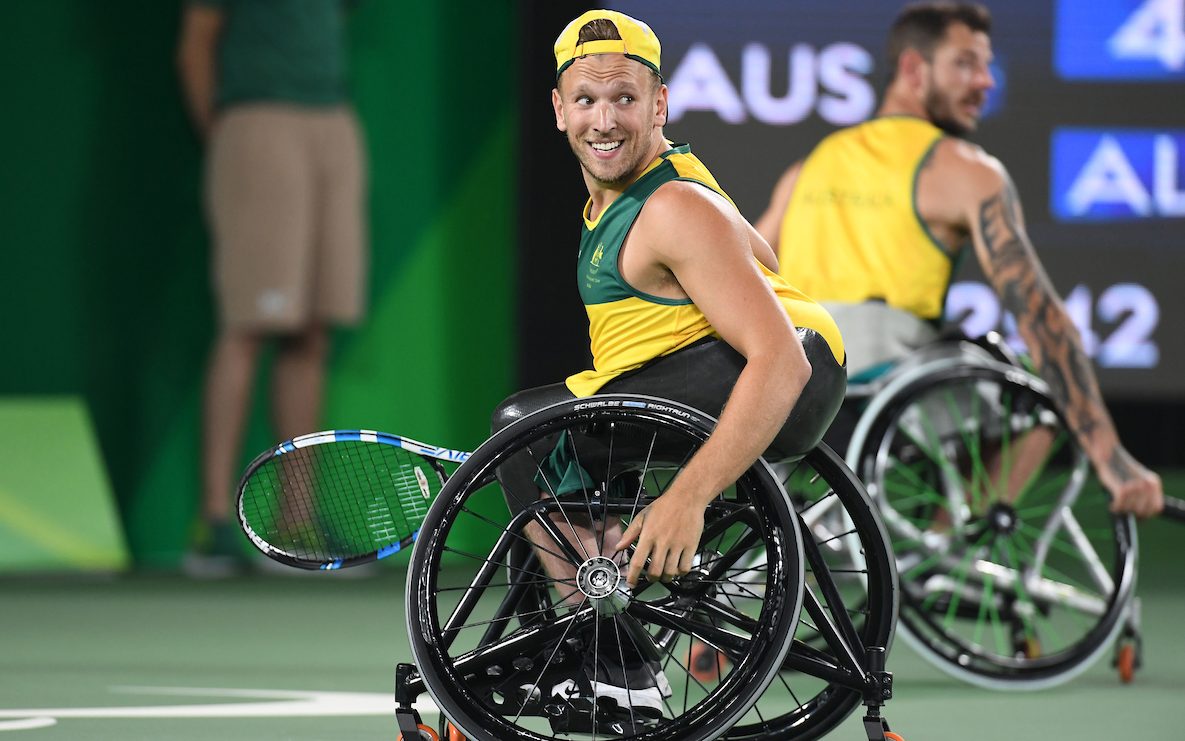 Australia’s top wheelchair tennis athletes, including dual Paralympic tennis gold medallist and multiple Grand Slam champion Dylan Alcott, have their sights set on gold when they head to Apeldorn, Netherlands, for the 2018 World Team Cup from 28 May – 3 June.

This is the largest Australian team to compete at the event – the wheelchair tennis equivalent of the Davis and Fed Cups – since 2007. Nine athletes from three teams will represent Australia in the men’s, quad and junior divisions.

Team members were presented with their prestigious Australian team jackets by Tennis Australia’s Wheelchair Tennis Coach Educator, Greg Crump, who was recently named as the recipient of the Brad Parks Award, the highest international honour in wheelchair tennis.

In the men’s division, veteran Ben Weekes will represent his country for an incredible 15th time alongside long-time teammate Keegan Oh-Chee, while Henry de Cure and the team’s ‘orange boy’ Martyn Dunn will make their debut for Australia. Together, the four players will attempt to win the men’s World Team Cup title for the first time since 2002.

“With two new players in the men’s team, it’ll be a bit of a change-up,” Weekes said. “Keegan and I will bring the experience, but Marty and Henry will bring that hunger. It’s going to be a great experience for them to get a taste of what it’s like to represent your country at the top level.”

Four-time Australian Open quad singles champion Alcott will return to the World Team Cup alongside fellow Paralympic doubles gold medallist Heath Davidson. The pair are hoping to win the title for the second time, after they won Australia’s first quad title in 2016.

“I love playing with Heath,” Alcott said. “It’s not every day you get to compete with your best mate, so I’m really looking forward to it.

“It’s great to have the juniors travelling this time as well. I played my first World Team Cup at 13, so I understand what it’s like to be in their position – and it’s going to be great.”

Davidson added: “It’s an awesome feeling to represent your country. I take a lot of pride from it, and I’m really looking forward to this year’s competition.

“In 2016, Dylan and I went into the competition without any expectations. We both thought we would get smashed, and to come away with the win was amazing.”

Victorians Finn Broadbent, Riley Dumsday and Saalim Naser will don the green and gold when they represent their country for the first time in the junior competition. Australia last fielded a World Team Cup junior side in 2011.

“I’m really happy and feel very privileged to be able to play a sport that I love for my country,” world No. 8 Dumsday said.

“Personally, I would love to win, but am trying not to set my expectations too high and put too much pressure on myself. It’s an incredible honour to be part of the team and I’ll take a lot of positives out of competing at this level.”