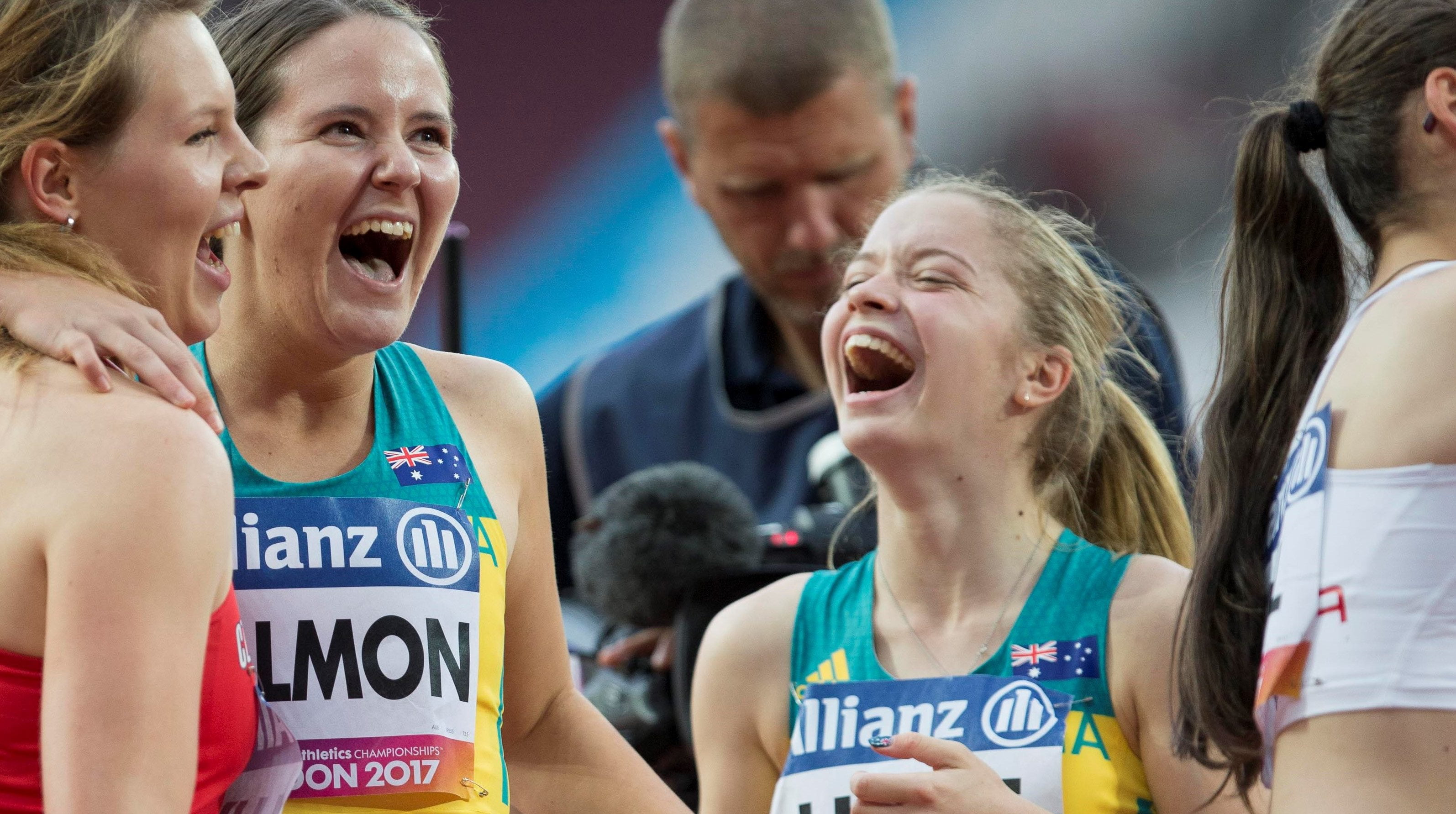 “It’s unbelievable. It’s just that I have all this pride, all this excitement – and a world record, I’m over the moon!”

The words of 16-year-old Isis Holt (T35, Vic) who won her second consecutive world title in the T35 100m, and her fourth world championship gold in her still very young career.

Sprinting across the finish line in world record time of 13.43s (+0.9), Holt may not have shocked many with another win, but she certainly surpassed all of her own expectations. Finding herself in hospital with tonsillitis just two weeks before departing for London, she believes she is lucky to have even had the opportunity to compete.

“I wasn’t even sure if I’d be here in London, so to be able to come out here and run a time like that, I can’t get over that,” Holt said.

The humble Melbourne teenager said what is more pleasing than claiming victory is understanding her own capabilities.

“Being able to come back in just a few short weeks, it’s added to my resilience as an athlete. Knowing that I can pull up and get results like that gives me confidence for the future, that no matter what happens, I can come back and perform to the best of my ability.

“All day I was really excited to come out here and give it a second shot. I really wasn’t sure what was going to happen, but to come away with gold and a world record has really put my trust back in myself, and the process that we, as athletes, work so hard on.

“I’m really lucky I’ve got an incredible support team and coach [Nick Wall] behind me in Melbourne, and I trust him. It’s all down to him and the people around me. And I know that with my trust in the process, I don’t have anything to worry about that, and I showed that to myself today.”

Celebrating alongside Holt were Australian teammates Brianna Coop (T35, QLD), who placed fourth in a time of 15.30s, and Carly Salmon (T35, NSW), not far behind in sixth place with a time of 15.92 – her personal best.

For Salmon, setting a new personal best and crossing the finish line within seconds of Holt was a spine-tingling and humbling moment.

“I’m feeling amazing right now, that was such a rush. It makes me really proud to be in a race with two other Aussies, and to see the crowd cheer us Para-athletes on. I finally ran under 16 seconds, which shows I definitely have more to give and I can’t wait to get back out on the track again,” Salmon said.

“I have goose humps right now! Isis is the most amazing person I’ve ever met, both as an athlete and as a friend. I don’t see her as competition anymore, it’s great to see her do so well,” Salmon said.

Having found herself in fourth position after her first couple of throws, Keefer threw 8.41m on her final attempt to cement herself in second place, behind Raoua Tlili from Tunisia.

“I’m overwhelmed, I most definitely wasn’t expecting that. I came in with an injury, and for that reason I never expected to finish on the podium,” Keefer explained.

“Being in fourth position for a while made me nervous, but I managed to bump myself back up into medal position pretty quickly. Then for my final throw, my coach John [Eden] said if he had to carry me off the field, he would, so I put everything into it and I got there.”

For Jaryd Clifford (T12, Vic), a bronze medal in the T13 1500m was something he thought he could only dream about. But his dream turned to reality tonight as he dashed across the finish line in 3:53.31.

Clifford, who is classified as a T12 athlete, meaning he is less sighted than his competitors in this race, was ecstatic with his performance.

“I am so happy to have run like I did just then, that was insane. I set myself the perfect pace – not too fast, not too slow. I was comfortable.

“I even told myself to be patient while I ran the race, and when I got to the last 100m, I thought ‘this is it, I really have a chance.’

“It was a massive shock when I cross the finished line. I was dreaming of it, but I don’t know if I actually ever expected it, and then I did it.”

Clifford credits his international experience since making his Paralympic debut in Rio last year for getting him to where he is.

“I did my first stint in altitude in America last year which was awesome. I also raced in Belgium earlier this year and staged in Germany. The experience has been invaluable, and has helped me get to this point in time now.”

Wheelchair racing stalwart Angie Ballard (T53, NSW) aimed to defend her world title in the T53 400m but missed out on a podium finish, coming in fourth in a time of 55.73s.

“This is the first time I haven’t medalled in the 400m in a world championships since London 2012. But I also knew that I’d be up there but not sliding in as easily as I have in the last couple of years,” she said.

“I’m bummed but I put in my best effort. Commonwealth Games is next for me. I’ll be preparing to race tactically. I won’t get a heat, or to see what my competition is like, and that will be the challenge there.”

Today also saw Rae Anderson (F37, NSW) compete in the F37 javelin, which was a non-medal event for this world championships. She threw 24.98m to finish in second place.