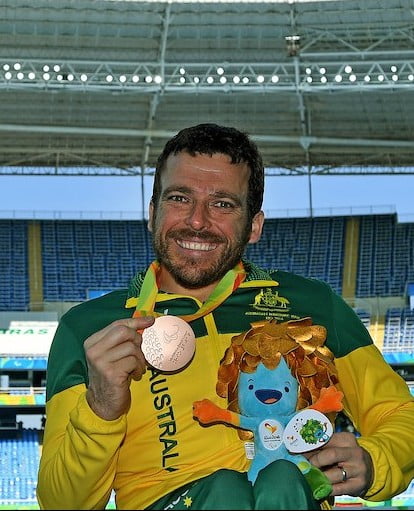 Another day, another few podium medals for Australia at the athletics track.

And while gold still remains elusive for the 45-member track and field team, the significance of today’s medals can’t be under-estimated.

Veterans Kurt Fearnley and Angie Ballard, who have 10 Paralympic Games experience between them took bronze in the 5000m and 400m respectively.

It was Fearnley’s 12th career medal and Ballard’s 7th, proving the quality and staying power those two wheelchair champions.

And then there was 23-year-old Taylor Doyle, who has an intellectual impairment after surgery for epilepsy proved unsuccessful. She came out and leapt a personal best 4.62 metres in the women’s T38 long jump for a silver medal at her maiden Paralympic Games.

“I just enjoyed myself. The day has been exceptional because I never expected to get that PB,” Doyle said. “You’ve just got to believe in yourself and anything can happen.”

“It was the same distance as me in Doha (4th at world championships) so it’s a little upsetting I couldn’t improve on that. But I’m going to go back and keep working hard,” Cleaver said. “And the atmosphere was electric.”

For Fearnley, he now has all three colour medals in the 5000m after gold in Athens and silvers in Beijing and London.  Still no guesses for how much he would have loved to take gold once again.

“You’ve always got to be relatively pleased because you can’t bank on anything,” he said. “I would have liked to have made a few different choices in that race but you never dwell – you move forward.”

“These weeks can be long, tiring and with changing momentums. You’ve got to react to that and keep building,” Fearnley said.

“I’m here for the very last day – the marathon. And that’s something I want. The marathon is the race that I love. Those 42 kilometres has been something I’ve lived for over the last 20 years.

“I do like the 5K. It’s nice to be able to stand on the podium for the fourth straight Games. And I’ve shared the podium with those two guys before. So it’s a good start to the week but something I can utilise to build on for next Sunday (marathon).”

Fearnley has the 1500m in between the two distance events.

Ballard received an odd question by one reporter at the Rio athletics track after she was beaten by China’s Zhou Hongzhuan in her pet 400m event – as well as losing her world record (54.69s set in the USA in June, now Zhou’s with a 54.43s). Ballard was also third to China’s Huang Lisha in the 100m last Friday.

“Are you bitter at all?” the reporter asked.

“Well obviously for some silver and bronze might not seem good enough but I’m very pleased with them,” she said politely in reply.

“If I’m going to win the 400 I usually like to hold them off and make them chase. But I didn’t get far enough ahead today.”

In other results, wheelchair racer Rheed McCracken was second-fastest qualifier in the men’s 100m T34 class. He actually broke the Paralympic Record with his 15.50s to win the first heat but then lost it to Tunisia’s London 2012 champion Walid Ktila (15.44s) in the second heat.

“It felt great. I was really happy with that – can’t complain at all,” said McCracken, who took silver in this event four years ago.

“Hopefully in the final I can go a little quicker. The Paralympic record I held for what, all of six minutes, was nice – really nice.”

Seventeen-year-old Jaryd Clifford mixed it with the much older brigade in the men’s 1500m T13 for vision-impaired athletes and managed 7th from the 14 runners, while the medals went to middle-distance specialists from Algeria, Ethiopia and Kenya.

“I got caught behind the main group and couldn’t find a safe passage through,” Clifford said competing in his first Paralympic final at his first Games.

“The crowd was so loud but it gave me such a good boost. It was also pretty rough out there but I loved it. A hundred per cent I want more. I know I wasn’t in the hunt but get me back out there.”

He locked himself into fourth position with a fine 6.89m in the third round. But in the sixth and final round Ukraine’s Dmytro Prudnikov jumped a personal best 6.96m to leapfrog Hum and Dutchman Ranki Oberoi for the bronze medal.

Hum was pushed back to fifth, which was still a vast ‘leap’ of his own following a 10th at the world championships in Doha last October.

“I’m very proud.. couldn’t feel more proud right now. When I walked out into the stadium I just loved it… the noise, the atmosphere,” the 25-year-old said.

“It made me think of all the support I’ve had from my family, my coaches, the VIS (Victorian Institute of Sport). It’s been an amazing build-up.

“The last four years have been incredible. All that I’ve achieved and to make it here… I’m proud of myself.

Hum suffered a lower back injury earlier this year, that distrupted training for about four months. He only just started to feel his rhythm again five weeks ago.

“I want to make sure I’m better to go into that future. Bring on Tokyo. I want to be there,” Hum said.

Not quite as euphoric was middle distance runner Brad Scott. He had brought back the silver medal in the T37 1500m (Cerebral palsy) for the last two Paralympics (Beijing and London) and the  last world championships.

But in Rio today, he failed to go with the pack when Irish world record holder Michael McKillop made his move. Scott finished 6th , well off the podium that has become a second home for him in this event.

“I don’t want to line up any excuses. I’m here for a reason and whatever I had done leading up to this race was enough. I just had to deliver. And what I did today was the best I had in the tank,” Scott said.

“The first 700 (metres) I was exactly on my race plan and then my legs started to feel a bit heavier, as they do.

“This is where I’ve got to go back home and really work on my psychological side to work through that pain and be Okay with that pain because sometimes I get a little bit scared.

“Today I gave it everything I had with what I had. I know there’s something else there, just behind it, that I’m not tapping into just yet. When I can do that I will be happy.”

In the men’s 100m T47 (amputees or limb abnormalities) Gabriel Cole came 7th in the final. In the men’s 400m T54 for wheelchairs, Jake Lappin (11th) and Sam Carter (15th) raced their heats well but did not qualify for the final.