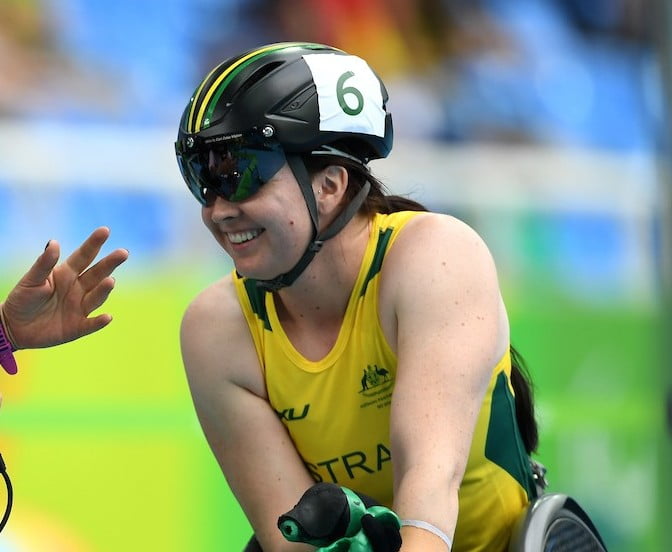 Consistency was the buzz word for the Australian athletics team on the opening night of the Rio track and field program with two athletes finishing on the podium for a second Games in a row.

Angie Ballard sparked her five-event program at the Maracana Stadium into life with a bronze in the 100m T53 wheelchair class – exactly the same result she achieved four years ago in London.

“Consistency is actually a good trait to have in athletics,” the 34-year-old said. “But it wasn’t a perfect race so I would have liked to have put it together better.

“We were all a bit shaky on the line and I must admit I thought the starter would call us back but he said ‘Go’. So I missed the start which was quite disappointing for me because the rest of the race was really good.”

China’s Huang Lisha, who had set a new world record in the heats of 16.19secs, was only slightly slower taking gold (16.28) ahead of compatriot Zhou Hongzhuan (16.51s, silver) and Ballard a third-of-a-chair length behind (16.59s, bronze). The Australian was gaining rapidly but ran out of time.

Meanwhile, Carlee Beattie claimed bronze in the long jump T47 class for arm amputees, after taking silver for the same event in 2012.

“I didn’t have a Paralympic bronze but I have one now. I still don’t have the gold but you know that’s how it is. I do have the world champs gold,” she said, referring to the 2015 IPC Athletics Championships in Doha last October.

Tokyo 2020 could provide an avenue for that gold.

“It’ probably too early to say. I’ll keep going and do world championships next year. But once again, I still haven’t got that gold so you might see me in Tokyo.”

Beattie competed last night as it was already her 34th birthday back in Australia with the time difference. So a medal was a timely arrival, as will some cake tomorrow as Beattie has no other events in Rio.

Beattie had been sitting in silver medal position until the final two rounds. Then in the last jump New Zealand’s Anna Grimaldi leapt a personal best 5.62 metres and won Paralympic gold.

Cuba’s Yunidis Castillo, who had led from the second round, was moved back to silver (5.59m), or just two centimetres from Beattie (5.57).

Considering Beattie was the only woman in the 12-strong field who had jumped over 6.0m, there was some disappointment in the end result.

“I started too slowly. I was struggling to get on the board properly and finally found my rhythm by the fourth jump. Unfortunately it wasn’t enough to get the win today.

“The wind did change halfway through so I reckon that messed with things a bit.”

First-time Paralympian Guy Henly moved into the bronze medal position midway through his six throws in the men’s discus F37 for cerebral palsy athletes, before overtaken and finishing fourth.