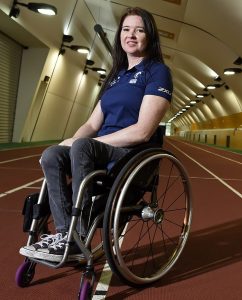 “Naming the athletes on our biggest team for Rio is an exciting milestone for the Australian Paralympic Committee, and we’re particularly excited to see what this outstanding team can achieve,” McLoughlin said.

“Australia has a rich history in Paralympic athletics. We’ve won more than 350 medals since the sport was introduced at the first Paralympic Games in Rome in 1960.

“And if the Australian Paralympic Team is to finish in the top 5 on the medal tally in Rio, it will be this group who will largely determine whether we achieve that goal.”

Having won a swag of silver and bronze medals at four Games, Ballard will be racing for her first Paralympic gold.

“We’re so close now, in 36 days we’ll be getting ready to compete. I haven’t had this pressure ahead of previous Games, but now I am among the top athletes competing in my class. I’m excited to see how it goes when I compete at the biggest event I can go to, and hopefully I’ll do really well.

Together with her coach, nine-time Paralympic champion Louise Sauvage, Ballard has overhauled her training program which has since seen her break multiple world records and is confident that their new approach over the past four years will see her reach her peak when it matters most.

“Since London I have realized my best could be the best in the world. I’m still finding the right combination of training, competition and preparation, and I still think there is more around the corner in terms of getting faster and getting better at what I do.

“I now know that my best is the best in the world, so I’m focusing on the processes that get me there.  I will focus on executing my best possible time and make sure I am doing everything I can do pull off a good race. Being a Paralympian is about the details and the process.”

Hitting her stride last year at the World Championships where she won gold, Carlee Beattie is hoping to continue her winning streak and turn her London Paralympic silver into gold.

“This is something I have worked towards for the last few years and I’m thrilled to be named on my third team with a chance to achieve my goals,” she said.

Athletics has been part of the Paralympic Games since the first in 1960 and events are open to athletes in all impairment groups eligible for Paralympic sport. Athletes compete according to their functional classifications in each event and these events are continually being redefined to include as many athletes as possible.