Australia’s leading female cricketers fell just short of the final hurdle at the recent ICC Twenty20 World Cup, but the campaign was still a success in helping the Australian Paralympic Team to Rio this September. 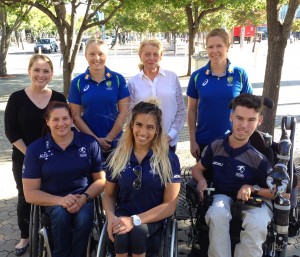 While the Southern Stars went down to the West Indies in the final in India to miss their fourth consecutive ICC trophy, the team’s ‘Runs4Rio’ campaign went some way to ease the disappointment.

In a incredible show of initiative and generosity, the Stars pledged to donate $50 for every four or six the team hit during the tournament. Reaching into their own pockets after hitting 84 boundaries, the Stars  were proud to eventually present the Australian Paralympic Committee (APC) with a $4,200 cheque.

A generous idea formulated on their own, Runs4Rio came about after captain Meg Lanning and vice captain Alex Blackwell heard about the APC’s fundraising target of $7 million on Channel 7’s Weekend Sunrise Parathon in March, said Blackwell.

“Meg and I had a chat about how we could contribute to such a great sporting team, and proposed a fundraising challenge to the group and altogether we came up with the initiative,” Blackwell said.

“It was a bit of fun as well as something to keep our minds occupied while we were in a pretty full on tourmanent in India.”

As the most capped player on the Australian team, Blackwell felt she could also personally identify with the fundraising challenge of the Australian Paralympic Team.

“I’ve been involved in elite cricket for 13 years. We are well supported now, but it’s not always been the case,” Blackwell said.

“I’ve been through those years, so I’ve seen how our game has changed and become more professional. I guess we recognise when support is needed.

Wicket keeper Alyssa Healy said the Runs4Rio campaign also united the team while overseas and reminded them of the responsibility of being an elite Australian athlete.

“Aiming to raise money for our Paralympians really got us together off the field too.,” Healy said.

“Going into the first couple of games in the tourmanet, we weren’t playing our best cricket but the campaign reminded us that we weren’t just letting ourselves down, we were letting our Paralympic athletes down by not putting totals on the board.

“We put this initiative together ourselves, and a lot of people heard about it back home in Australia and we didn’t want to let them down either. It kind of kept us motivated in a way, and I’m really glad we could show our support this way.”

Blackwell added that the Paralympics has always been a sporting event close to her heart.

“Louise Sauvage has always been a bit of a hero of mine. Watching her win gold, and she also came and spoke to the Sydney Thunder, a team I captain, and she helped us throughout this successful season we had in the first women’s Big Bash tourmanent.”

“The donation is a way for us to be a part of Rio too, so when we watch our Paralympians out there in Rio, it’s a bonus for us. We’re sort of a part of that because we helped in a small way to send them there.

“We wish all of our Paralympians all the very best in Rio. We can’t wait to see them win lots of gold medals.”