Thriving in the hot and dry conditions of the Middle East will be the key to success at the IPC Athletics World Championships according to discus thrower Guy Henly (NSW). 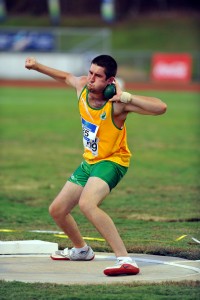 With temperatures set to soar into the high-30’s the event will create challenges for every athlete, but for Henly, who has cerebral palsy, it will be something that he is used to after making an effort to simulate the conditions as part of his training program.

Taking full advantage of the unusually warm recent Sydney weather and arriving in the host city of Doha (QAT) more than two weeks out from his scheduled start, the 28-year-old is determined to better his podium finish from the world titles two years ago.

“We’ve been trying to simulate the hot conditions that I am likely to encounter in Doha, and hopefully that will give me an advantage come competition time,” Henly said.

“I am aiming to better my bronze medal from Lyon two years ago. Everything has been going well. There have been a few things that we’ve tinkered with in the lead up to make sure I’m in the best shape and it seems to be working.”

Coached by Breanne Clement, a team coach at Doha 2015, and Karyne di Marco, Henly made his Australian Flame debut at the IPC Athletics World Championships in 2013. Hurling 51.13m to win bronze, he has continued to flourish with 2015 rankings listing him as the number one ranked athlete for his F37 class.

“I feel confident now. I know what to expect when travelling with an Australian team. The world titles two years ago were a great experience and to know that I can medal at a major championship is really special,” Henly added.

Competing in the shot put, Donovan and Keefer, who are both of short stature, will make their Australian Flame debut alongside the visually impaired javelin thrower Hampton and seated shot putter Wyatt.

A gold medallist at the Delhi 2010 Commonwealth Games, Ellery will start at her third consecutive IPC Athletics World Championships. Short, who is visually impaired, is competing at his seventh world championships after making his debut in the shot put in 1994.

Hodgetts won the F20 shot put for athletes with intellectual disabilities at the London 2012 Paralympic Games, while Proudfoot and Sawyer are on track to improve their bronze medals in the shot put and javelin from the IPC Athletics World Championships two years ago. Hogan will be looking to return to the dais in her F46 arm amputee javelin class after missing Lyon 2013 through injury.

Harris trains alongside Henly in Sydney. She threw a personal best of 11.70m in Townsville (Qld) during her final pre-departure competition and will lead the Australian Flame on day one of competition on 22 October 2015.

The Australian Flame team for the IPC Athletics World Championships is 48-strong. They arrived in the host city of Doha this past weekend.