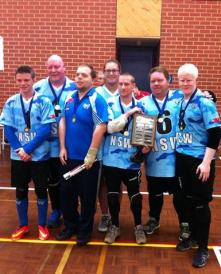 As the demand for goalball increases across the country, Goalball South Australia held the state’s first ever National Championships, with 90 players attending from five states to take part in the four-day event.

As a state which had never held the Championships previously or entered teams in all categories, South Australia came up strong, winning the junior division and taking home a silver and bronze in the women’s and youth divisions respectively.

“Goalball South Australia has done a great job in both hosting the event and in increasing participation numbers across all divisions,” said Tournament Director and Australian Paralympic women’s team manager Cathy Lambert.

“As a sporting organisation, Goalball South Australia has only been around for 10 months, so to put on such a high quality event and allow so many people inside and outside of the sport to see what goalball is all about was a great achievement.”

The first-time event attracted South Australian VIPs from the State Government and other key sporting organisations a first-hand experience of the sport.

“We held a formal opening ceremony, and the game that followed the reception was the a women’s match between the two teams that made it to the final, NSW and SA,” Lambert said.

“Out of the eight players across the NSW and SA women’s team, seven of them are current Australian team members or in the national squads, so it gave them a good taste of our highest calibre athletes and what is to come from the sport.”

On national a level, participation was strong in the junior and youth divisions, showing plenty of promise for future teams, and the standard of play across the grades was more than it had ever been in past years, making for an exciting competition.

“Goalball has come a long way since it became a Paralympic sport in 1976, and it’s incredible to see the it become more popular to participate in each year. The awareness of the sport is truly growing,” Lambert said.

“With opportunities available for goalball players, the future for the sport at is bright at both Paralympic and community level.”

Results and awards from the 2014 Australian Goalball Championships are as follows:

Photo with thanks to Goalball South Australia