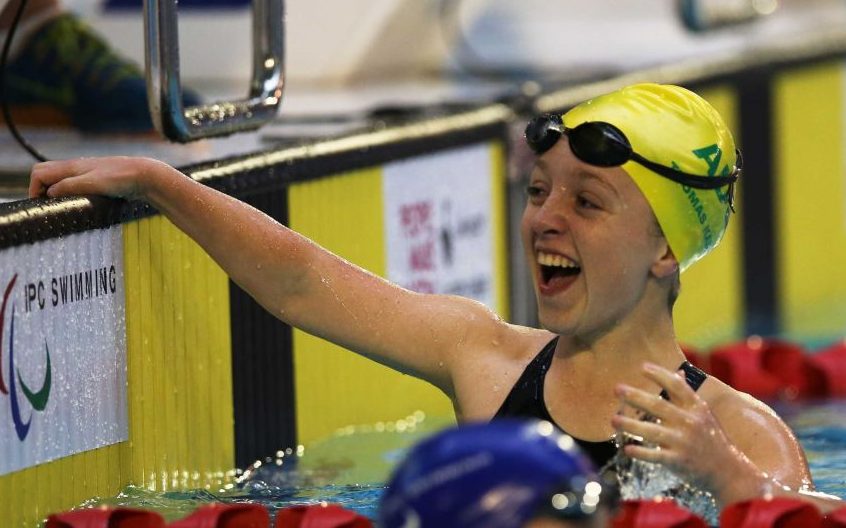 The Australian Dolphins swim team has ignited the pool on day two of competition at the 2015 International Paralympic Committee (IPC) Swimming World Championships in Glasgow, Scotland, with a 13-year-old Sydney schoolgirl and Paralympic golden girl Ellie Cole leading the way.

Thomas Kane, who was born with hypochondroplasia and is a girl of short stature, clocked a new world record time of 1:34.95 to claim the gold medal ahead of British pair Charlotte Henshaw (1:36.94) and Eleanor Simmonds (1:39.99). Australia’s Tanya Huebner placed fourth in 1:40.85.

The impressive swim was Thomas Kane’s first at an international meet, after her world record-breaking efforts at the Australian Swimming Championships in March earned her selection to the Australian Para-swimming team.

She said, after her win, that she was grateful for the support of the Australian Dolphins.

“I don’t think I’ll ever forget the Aussies cheering me on from the stands. I could hear them roar in the last 50m, supporting me all the way to the finish,” said Thomas Kane, who trains under the Falvey brothers, Mitch and Lach, at Ravenswood Swimming Club – the same club as dual world champion and Olympic silver medallist James Magnussen.

“I gave all I had to the race, I don’t think I could have gone much better.

“After the heat swim this morning, I thought I could get close to it [the world record], but I didn’t think I’d get under, so I am really happy with the result.”

Thomas Kane still has a selection of events on her racing calendar this week, including the women’s 50m butterfly S6 tomorrow (18 July).

After her world record-breaking swim to win gold in the women’s 100m backstroke S9 on night one, Cole successfully added the women’s 100m freestyle S9 title to her gold medal haul, finishing in a slick 1:02.78 to claim the world title.

While Cochrane congratulated Serrano Zarate on a fantastic swim, he is looking forward to a year of hard work before the pair hopefully meet again at the Rio 2016 Paralympic Games.

“Full credit goes to Carlos. He swam a really solid heat swim, so to come into the finals and back it up – and go quicker is pretty good,” said Cochrane.

“All paths lead to Rio, so I’ve got another year to look at where our strategy has been and where we can make up some time.”

It was a battle of the best in the men’s 100m freestyle S9 final tonight, as Brenden Hall powered through to the finish against Russia’s Alexander Skaliukh and Italian swimmer Federico Morlacchi. Hall clocked 57.51 to nab the bronze medal behind gold medallist Skaliukh (56.97), and Morlacchi (57.29), who clinched silver.