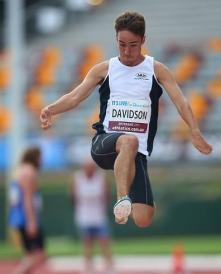 Improving on the previous best mark by eight centimetres, and his competition opening personal best of 5.39m, Davidson’s leap of 5.51m (w: +1.3) in the men’s ambulant long jump ensures his serious contention for the selection to the Australian Flame team bound for the IPC Athletics World Championships in Doha (QAT) later this year.

“I am over the moon. It’s a massive personal best which is great, but for it to be a world record too is just amazing. It is miles ahead of where I thought I would be at this time of year, so much bigger than I was anticipating,” Davidson said.

“I’m excited about World Championships now. Yes I have jumped this distance, I know that I can leap that far, but in Doha I will be the youngest in the field against athletes the can jump marks similar to me on any given day so it will be a real test of where I am at.”

Davidson’s series was almost faultless, with legal jumps of 5.37m, 4.88m, 5.25m, 5.31m and only the one foul alongside his record breaking leap. He was the leader from the outset, with his winning leap coming in round one.

“I just hope to make a final in my other two events. It’s a different ball game here at open Nationals, but if I can make the last round that will be great. These two events are at the end of day for fun, and I’m keen to get back out there,” Davidson added.

Donovan broke the world record to win gold in the women’s ambulant discus throw after she threw 16.73m with her third attempt. Improving on the previous world mark for her F40 short-statured class by more than ten percent, the throw sat alongside a stunning series that also included marks of 15.98m, 16.01m, 15.10m, 16.40m and 16.47m.

Competing in the men’s 800m, all of Josh Ralph (NSW), Jeff Riseley (Vic) and Alex Rowe (Vic) progressed to the final on Saturday after being challenged in the first round.

Ralph took line honours in the first heat in 1:49.56, narrowly edging out the fast improving Dylan Stenson (SA, second, 1:49.60) to auto-advance as one of the top-two finishers. On track next was Riseley, with the Commonwealth Games finalist the first past the post in 1:48.59, before national record holder Rowe (1:51.21) took victory in the third and final heat from IAAF World Junior Championships representative Luke Matthews (Vic, 1:51.28)

“It was very competitive out there tonight. It surprised me. I had to run 1:48 to be in the clear and that’s something that I haven’t experienced at this event for past few years. Fair to say it’s a strong indicator for the direction of the 800m in Australia at the moment,” Riseley said.
“It’s going to be a great final. I stayed out here to watch Rowey (Alex Rowe) in that last heat and he managed to come home toward the end after running a pretty tactical event. He’s a class athlete and found a way tonight, so it’s going to be interesting when there is a few of us looking to do the same on Saturday.”

In the shorter women’s 400m, Anneliese Rubie (NSW) qualified for the final as fastest after she clocked 53.86 to win heat three. She’ll be joined in the final by reigning national champion Morgan Mitchell (Vic, 54.19) and her Glasgow 2014 teammate Caitlin Sargent (Qld, 53.95), who won heat one and two respectively, as well as the winner of the event at the IAAF Melbourne World Challenge, Jess Gulli (Vic, 54.20).