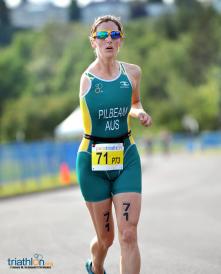 Perth mother of two Sally Pilbeam will have a special present to show her two sons Ben and Nick when she arrives home to WA this week – a gold medal from the ITU World Paratriathlon Championships in the PT3 category.

Twelve years ago Sally lost her right arm from her shoulder through cancer and 18 months ago she contested the first Australian Paratriathlon Championship and today she is a world champion.

Sally left her two boys Ben, 9 and Nick 5 in tears last week when her and husband Matt left with the Elite Australian Paratriathlon team.

“This is for the two boys, I’ll dedicate this gold medal to them and my parents for all the support they have given me,” said Pilbeam.

“It makes all the early mornings and the late nights and the hard work worthwhile, it’s the best moment and I have to thank my family for allowing me to fulfill my potential and my coach Andrew Budge. I could not have done  it without them.”

“I actually swam really well, the bike was good and my run has really improved,” said Sally, whose husband Matt has been with his wife every step of her journey and acts as her personal handler on race day.

He was first to the finish line to hug his wife when she braced the tape to claim the gold and her Australian team mates were all waiting in the wings to congratulate her.

Her training has seen her drop her personal best time for 5km from 37 minutes 18 months ago to 24 minutes today and she was quick to praise coach Budge for his time and commitment.

When asked about her most difficult hurdle she says: “Learning to ride a bike with one arm has been the most difficult thing for me. Working out how best to adapt the bike was challenging.”

The Australian Paratriathlon team, all integrated into their first major Elite team and their first World Championship, aquitted themselves with distinction, without four-time world champion in the PT1 wheelchair class Bill Chaffey, who broke two bones in his pelvis in a freakish training accident the day before the team was to leave.

Leg amputees Godfrey, Garvey and Swift were all very competitive against their specific competitors. Swift was the second leg amputee in his PT4 category.

Australia’s Paratriathlon Performance Manager Kathryn Periac said there were some very encouraging performances considering the team had only been seriously competing at an Elite level for 12 months.

“I could not be prouder of the whole team and very happy for Sally who has put vin so much hard work – she deserves the gold medal,” said Periac.

“We’ve come a long way in 12 months but there is still a long way to go and I know they are all determined to make the most of their opportunities.

“There is a specific camp at the AIS in November and I know we will be better for next year’s World Championships in Chicago as we await the outcomes of the final categories for the sport’s debut in Rio in 2016.