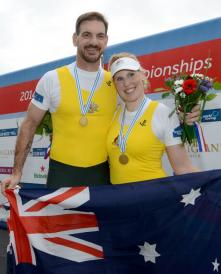 Australia kicked off its finals campaign in style at the 2014 World Rowing Championships when all three of its para-rowing crews claimed medals in Amsterdam overnight.

Erik Horrie claimed gold in the Arms, Shoulders Men’s Single Scull and retained the title he won last year, while Kathryn Ross and Gavin Bellis replicated their win of last year with another gold medal in the Trunk and Arms Mixed Double Scull.

By virtue of winning two gold medals and one silver, Australia was the most successful nation in the para-rowing aspect of the 2014 World Rowing Championships.

Horrie led from start to finish in the final of the ASM1x, leaving the battle for second and third place to go between Great Britain’s Tom Aggar and Russia Alexey Chuvashev. The London 2012 silver medallist never looked like he wasn’t going to retain his title and that’s exactly what he did, rating at 33, the New South Welshman looked comfortable as he crossed the line to take his gold medal.

Post-race Horrie said: “It’s an absolute honour to be crowned World Champion once again. It was a great race and it’s been fantastic to see so many competitors out there and congratulations to Tom and Alexey on their medals.

“The whole team has trained hard both in Italy and here in Amsterdam for this and I’m grateful to my coach Jason Baker and all the support I’ve received in order to get me to this position once again.”

In the TAMix2x, Bellis and Ross flew out of the start in a bid to retain their 2013 title and taking on France in the final, they knew they had to take the race from the beginning.

Rating at 41 through the middle body of the race, the crew based at the NTC-Canberra and coached by Gordon Marcks, remained in the lead over Josiane Lima and Michel Gomes Pessanha of Brazil with France and Ukraine chasing.

In a fight for the finish line it was Bellis and Ross who claimed gold once again, while France were in second and Brazil third. Post-race Ross said: “It was a good race, nice and tight, with a few surprises. It all bodes well for us ahead of the Paralympics in Rio in 2016.”

Bellis echoed Ross’s sentiments saying: “It’s brilliant to be crowned World Champions once again and as Kat said it’s all great for us ahead of Paralympic qualification next year in Aiguebelette, we want to keep this momentum going.”

Ukraine and Australia had won the qualifying heats earlier in the week so were in a good position ahead of today’s final and the Australians got out to a good start leading for the first 500m, but it was to be the Ukrainians day as the Europeans had the extra power in the final 500 metres to retain their title.

Australia’s early power out of the start though paid dividends as they came through to take silver with France taking bronze.

The young McGrath was delighted with the win: “I am really happy right now, it was a hard race out there and we had competition the whole way down the course.

“The final 500 metres was really tiring but to be walking away with a silver medal in our first every World Championships is just awesome, we’re thrilled!”

Earlier in the day, Australia’s seven non-para-rowing crews competed for places in the finals of the 2014 World Rowing Championships, with six securing themselves places in finals over the next three days.

Victorian duo, Lucy Stephan and Charlotte Sutherland qualified for the A Final of the Women’s Coxless Pair after finishing third in a race eventually won by Megan Kalmoe and Kerry Simmonds of USA. The young partnership, coached here by Mark Fangan-Hall, will face a tough final on Saturday in a race that includes current World Champions, Great Britain.

Thrills and spills occurred in the Lightweight Women’s Double Scull semi-final featuring Alice MacNamara and Ella Flecker, with Australia leading the race till the last 250 metres before being pipped at the line by Canada.

The Men’s Coxless Four took on the reigning World Champions and host nation, The Netherlands in their semi-final, along with Greece, Serbia, Germany and Ukraine. The boat, stroked by Alex Lloyd, led the race from start to finish and crossed the line first in a time of 5:54:39 and lined up a final alongside Greece, The Netherlands, Great Britain, Canada and the USA on Saturday.

Australia’s Women’s Quadruple Scull of Jessica Hall, Kerry Hore, Madeleine Edmunds and Jennifer Cleary also required a top three finish to make the final of their boat class and the Queensland-based crew kept up with the current World Champions, Germany, for the majority of the race.

Finishing with a time of 6:26:17, the Australians coached by Tom Westgarth, finished in second place behind the World Champions and booked themselves a place in this weekend’s final.

Darryn Purcell and Alister Foot continued the good form they found in the Lightweight Men’s repechage, to progress through their semi-final with a third place finish in blustery conditions in Amsterdam. The Tasmanian-based duo will now race in the A-Final of the event on Friday.

Joining Purcell and Foot in competing in finals tomorrow will be West Australian Perry Ward who chased down the pack in his Lightweight Men’s Single Scull semi-final to take third place.

After a good start, Ward was chasing down the pack which was led by China’s Jinbin Zhao and eventual winner Italy’s Macello Miani. Ward muscled his way through and by the final 500 metres, as China lost steam, the young sculler pinched third place, while Ireland took second.

The Women’s Eight were unable to repeat their form from the heat earlier in the week when they took on China, Russia and the Netherlands in their repechage in a bid to make the A-Final. Coxed by Lizzy Patrick, the crew finished fourth in the repechage which meant they lost out on a spot in the final this weekend and will instead compete in the B-Final on Sunday.

Photo with thanks to Rowing Australia