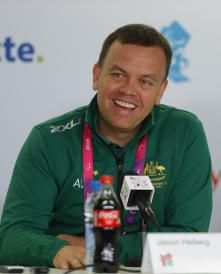 The Board of the APC appointed Hellwig to the role for the second consecutive summer Games. According to APC President Glenn Tasker, Hellwig’s knowledge of Paralympic sport, vast experience and leadership qualities made him the best candidate to take on the role once again.

“Jason knows exactly what it takes to succeed at the Paralympic Games,” Tasker said.

“The London 2012 campaign he oversaw was outstanding in so many ways, but the APC Board has given him the task to lift the standard even higher for 2016.

“Jason’s philosophy has always been to support every Australian Team member to perform at their peak when it matters most, and with Rio 2016 likely to be a very challenging Games for a lot of reasons, he will not waiver throughout the campaign when it comes to ensuring that this philosophy is upheld.

“For Australia to surpass our 2012 tally of 85 medals, it is going to require everyone involved with the Paralympic Team to go above and beyond what has been done previously, and I have every confidence that Jason will help this team do exactly that,” Tasker said.

Hellwig said he will approach his second Games campaign as Chef de Mission with two clear goals; to achieve Australia’s target of a top five finish; and to achieve a new level of recognition for Paralympic sport across the nation.

“Historically Australia is a successful Paralympic nation and it goes without saying that in terms of medals, we are aiming to not only continue this success, but build upon it in Rio,” Hellwig said.

“But perhaps most importantly, the 2016 Australian Paralympic Team has the opportunity to help take Paralympic sport to greater heights, not just at the elite level but at a participation level as well.

“Millions of Australians will watch the 2016 Paralympic Games and we want this team to inspire more people than ever before through their performances on the field and their conduct off the field. We also want to inspire more people with a disability to get involved in sport because of the benefits it can bring to people’s lives.”

With Para-canoe and Para-triathlon being added to the Paralympic program, Australia will aim to take a team of more than 170 athletes from 15 sports to the Rio Games from 7-18 September 2016.

Athletics, swimming, cycling, wheelchair rugby and wheelchair basketball will again be the key medal sports for Australia, but sailing, table tennis and rowing are among other sports which are making impressive progress.

“We expect to take medal prospects to Rio for every sport,” Hellwig said.

“We are working very closely with our National Federation partners – as well as the AIS, ASC and the AOC as part of Campaign Rio – to ensure that this Team is given every possible chance to achieve success.

“As was the case in London, we know that only a few medals can be the difference between a top five finish and finishing outside the top ten, and our rivals have made no secret of their desire to displace us.

“We also know it is getting harder and harder to win a medal at the Paralympic Games, and I want to make sure Australia is not left behind but rather is the driving nation that continues to lift the standards at future Paralympic Games.”

Hellwig, who has been Chief Executive of the APC since 2010, was the Australian Paralympic Team’s General Manager for Sport at the 2004 and 2008 Paralympic Games after serving as the Athletics Team Section Manager at the Sydney Paralympics in 2000.