Two top 10 finishes but no medals in women’s slalom 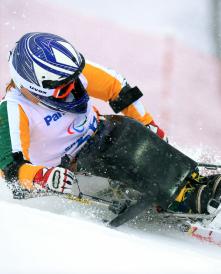 While the performances of some of the Australian Paralympic team continue to impress in Sochi, the hunt for medals continues.

“It’s a nice experience for me at the end. Given the conditions and everything we’ve faced here I’m pretty happy to make it down,’’ the 23-year-old said.

“I think I could have skied a little better, but it was definitely a bumpy ride.’’

Vancouver bronze medallist in Slalom four years ago, Jess Gallagher (Vic) found the going difficult. She had a clear first run and was in fourth position, but  then had to stop and re-negotiate a gate near the bottom of the second run.

“Unfortunately with the weather conditions my goggles just got completely obliterated. I’ve been a bit unwell at the moment and struggled quite a bit today,’’ Gallagher said.

“With the dizziness I was losing my vision and couldn’t see where the gate was or (guide) Christian (Geiger) was unfortunately.

“The conditions are really tough. But you have to be able to come out and put down a run regardless of the weather. I knew that coming here.’’

The 26-year-old, who turns 27 on Friday, said she had not been able to find the cause of her light-headedness.

“I did have a concussion about a month ago. So we’re not sure if it’s some post-concussion syndrome,’’ she said.

“I do have some blood pressure issues so I’m not really sure what’s causing it. I’m just disappointed it has reared its head the past few days.’’

Australia’s vision-impaired class skier Mel Perrine (NSW) was the third competitor racing today, but she fell near the top of the first Slalom run to record her second DNF of the Games.

The warm conditions that greeted athletes on the first three days of competition have been turned on their head the past 48 hours. After fog and rain on Tuesday, it snowed continuously on Wednesday.

“The snow that’s fallen works into the hard surface and really softens it up,’’ Australian head coach at the past three Winter Paralympics, Steve Graham said.

“What they’ve had to do today is clear all the snow and then re-salt (the slope). It’s a bit like adding  water to ice cream – it doesn’t freeze,’’ he added. “They’ve put the salt on it to try to freeze it but it’s not that effective.

“But overall it wasn’t too bad and it was the same for everybody. The bottom half of the hill was really acceptable but the top half on that steepness was really difficult.’’

When asked to sum up his the performance of his athletes on day five of the Games, Graham did his best to search for the positives.

“A little frustrating again, a little disappointing,’’ he said.

“These conditions for Jess are not ideal considering her limited skiing experience. Unfortunately she just wasn’t able to put it down today.

“Tori I thought was really good. It’s her first Games and two solid runs – probably her most solid of the season, especially in these kind of conditions and this kind of hill.

“So that was promising looking to the future,’’ he added.

“For Mel, really disappointing – just one of those things – and just added to her run of outs,’’ Graham said. “The positive out of it is that she’s skied well – she’s skied fast.

“Her disappointing day was the Downhill (4th) because two days prior to that she was on the podium twice in training.

“But she’s skied her the way a lot of people 12 months ago thought she couldn’t ski. She’s shown she can be competitive, so a little more time and putting all the pieces together can put her on the podium.’’

With five days down and no medals, Graham is not completely despondent.

“I’ve said for a while we could win no medals here or we could win six. It’s just the way it is,’’ Graham said.

“If you look at it, potentially we could have won a few here already. But we haven’t and that’s the nature of the Games. We never knew what the weather was going to be like and some conditions favour certain disabilities.

“We’ll just have to see what we get the next three days.’’

Australia has medalled in every Winter Paralympics since 1992 in Albertville.