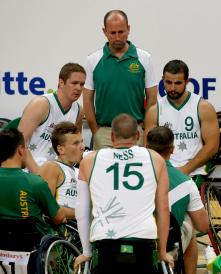 The Australian Rollers men’s national wheelchair basketball team have named a 21-player squad in contention for selection to represent the team at the 2014 IWF Men’s Wheelchair Basketball World Championships in Incheon, South Korea.

The defending World Champions, the Rollers squad is littered with star power, including a core of the team that claimed the world title in Birmingham, England four years ago.

Following the official draw for July’s tournament last week, the Rollers will face a tough task to get out of the group, with games against European trio Germany, Sweden and Italy to challenge their hopes of winning back-to-back World Championships.

Rollers Head Coach Ben Ettridge said the strength in depth of the squad is testament to the quality of wheelchair basketball in Australia.

“The depth of this extended squad is truly a testament to the talent that currently lies in the Rollers program,” Ettridge said.

“We have an experienced core in the form of Brad Ness, Mike Hartnett, Justin Eveson, Shaun Norris, Tristan Knowles, Bill Latham, Jannik Blair and Nick Taylor, who formed the team that claimed silver in London

“These players provide great leadership and really set the standards for the group, giving the younger players a clear expectation of what is required to be part of the Rollers program.”

The emergence of the youth coming through to the senior team has also excited Ettridge, believing this will ensure the contest for spots in the final 12 remains strong.

“This squad also includes some exciting young players who have come through our development pathway, such as Tom O’Neill-Thorne, Luke Pople, Michael Auprince and Jordan Bartley,” Ettridge said.

“All four of these players were keys to the success of the Australian Spinners at the Under 23 World Championships last year.

“The goal of the Rollers program is always to have pressure from beneath. No one owns their spot in the team and must earn it.”

The Rollers begin their preparation for the World Championships next month (10-22 April) with a tour of Europe for training camp and tournament games.