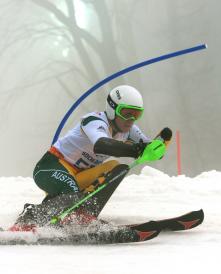 FOG and rain swept into the Rosa Khutor Alpine Centre today (Tuesday) but Australian skiers Toby Kane (Vic) and Mitchell Gourley (Vic) have put themselves in the running for a podium finish in a disrupted super combined event at the Sochi Winter Games.

Kane is in 5th position and Gourley 6th out of the 25 athletes who had to deal with a completely different set of conditions than they had faced on the first three days of Alpine competition, where unseasonal sunshine and warm weather prevailed.

The super combined is divided into two races – super-G and slalom. But due to the dramatic change in visibility and snow conditions, Sochi organisers flipped the schedule around and decided to run the slalom component first.

The super-G race to complete the super combined will not be raced until Friday.

But NSW vision-impaired athlete Melissa Perrine will not be able to race. She was disqualified for wearing an illegal makeshift visor attached to her helmet. She had taped the visor there to shield her eyes from the bright lights used to illuminate the 200-metre course in the dull conditions.

However, the Australian alpine team admitted it had overlooked the international rule banning any tinkering with race helmets.

Perrine was in second position to Aleksandra Frantceva (Russia) after the slalom race today and has taken the news hard.

Meanwhile, there were three delays to the starting time today to make it an even more challenging scenario for all the athletes in the six classes in action – men’s and women’s vision-impaired, standing and sitting classes.

The tough conditions for the athletes was magnified with defending women’s gold medallist in super combined from the 2010 Vancouver Winter Games, Henrieta Farkasova, disqualified for missing a gate.

In the men’s, Vancouver silver medallist in super combined and bronze in downhill here at Sochi, Vincent Manual-Gauthier recorded a DNF. He was one of seven skiers that did not finish today.

Gourley said it was challenging just to get to the starting line with all the time delays.

“It’s a tough one. Your head is kind of in and out of the game on a day like today – one minute it’s one; the next minute it’s off. And then we’re running slalom first,’’ Gourley said.

“The conditions all week, and again today, is about who adapts the best because everyone has got to deal with it.’’

The 22-year-old has never skied a super combined in reverse – with the slalom first. The fog and rain did not help.

“Not a great run by me but no-one was going to feel good today. Even the guy in front, in the lead probably thought it (snow) was awful. But it’s about adapting,’’ he said, adding that he would prepare as best he could for the super-G section on Friday.

“I guess we go down and get these really, really wet boots off and try and relax and recover and keep our head in the game. There’s a lot of stuff out of our hands and out of our control this week.’’

Kane was not pleased with his run as he hoped to move closer to leaders Alexey Bugaev (Russia), Braydon Luscombe (Canada) and Matthias Lanzinger (Austria).

“That’s probably the first run here that I’m not happy with. I know that sounds interesting considering I didn’t finish the super-G (fell near top), but that wasn’t my best run by any means. It was just a real battle physically and mentally to get down the hill,’’ Kane said.

“I guess the thing I am disappointed with was that I really wanted to approach the run as a one run race and I wanted to put down as good a run as I possibly could and then deal with the next one as a one run race,’’ he added, not sure of what will come on Friday in the super-G section.

“To be honest, I really don’t know. I presume that we will be racing the same course that we inspected (before the super-G was postponed due to weather). I don’t see any reason why they would change the course that has already been set and inspected, so we’ll have a chance to look at it again obviously, see where it’s at, and then go from there.

“As we saw in Sunday’s super-G, many people didn’t finish, many people make mistakes, so it’s just a matter of going up there and putting a good run down.’’

Australian head alpine coach Steve Graham said it was positive news for the team with Kane and Gourley in contention for super combined medals after battling the elements.

“I thought Mitch skied really well at the top. At the bottom he got caught jumping in the combinations (technical part of the course) here and he kind of kept that rhythm all the way to the bottom. He probably could have come into the finish a bit faster,’’ Graham said.

“But the bottom line is they are in the ball park and as we have seen over the past few days, anything can happen. They are fifth and sixth. (Canadian Braydon) Luscombe has the potential to have a decent run in the super-G but you would back our guys to beat him, and the other three leaders are the favourites.

“Both the boys need to put down great runs to be there (on the medal podium), but they are definitely in the game,’’ Graham said.