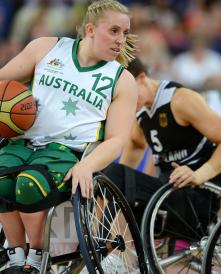 The Australian Gliders have begun the 2014 Lakeshore Cup by splitting their opening two games of the tournament, going down to the USA before rebounding to defeat Japan on Wednesday.

Three days of intense competition at the Lakeshore Cup will see the Gliders face Japan and the USA three times each, playing a total of six games in three days to conclude their tour of Canada and the USA.

It was a dominant Gliders performance in their second game of the day, showing their quality to easily account for Japan 69-35.

From the first tip, the Gliders were much improved at both ends of the floor, amassing an 18-9 advantage at the end of the first quarter. This lead only grew over the rest of the game as the Gliders saw eight different players get their name of the scoresheet.

On the offensive end Amber Merritt was outstanding for the Gliders, posting a team-high 25 points, with Shelley Chaplin chiming in with 10 points of her own.

Gliders Head Coach Tom Kyle was impressed by the defensive efforts of his players after a poor start against the USA.

“I was very happy to bounce back after the first half effort against the USA,” Kyle said.

“Our aggressive defensive style is choking up the offensive end for Japan, which allows us to ready ourselves for the rematch with the USA and a chance to improve our performance.”

In their opening game against the USA, the Gliders struggled to find their range early (23% FG in the first half) and paid the price as the hosts established a 37-20 halftime lead. A much-improved Gliders effort reduced the margin in the second half, but the USA were still able to record a 64-51 victory.

Merritt carried her good form from the Toronto Challenge into the first game of the Lakeshore Cup, posting 10 points, while Bridie Kean had 9 points.

Kyle said the first half was simply not up to the standard he expects of his team against quality opposition.

“We were awful in the first half,” Kyle said. “We simply got out pushed and were panicked by the pressure defence of the USA.