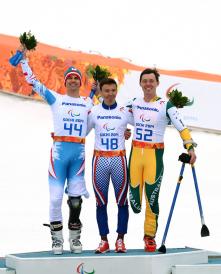 It was eight years between Paralympic medals for Toby Kane and a six-day drought in Sochi but finally Australia has its first medal of the 2014 Games.

Kane, 27, finished with bronze for the Super Combined, which took three days to complete with all the weather disruptions and delays mid-week.

For a brief few minutes, Kane shared the leaders’ hut with team-mate Mitchell Gourley (Vic), who also skied a brilliant run to finish just behind Kane in 2m:14.38 for 5th place.

Kane was hugged by Australian coaches and staff, but when he embraced his great mate and fellow leg amputee, Cameron Rahles-Rahbula, the tears flowed. Rahles-Rahbula should have been skiing alongside Kane and Gourley (arm amputee) in the men’s standing class in Sochi. But he fractured the top of his right shin bone in a Downhill training crash two days before the Opening Ceremony.

For Kane, it was a dream realised of once again standing on a Paralympic Games podium. The last was back in 2006 at the Torino Games – a bronze in the stand alone Super-G.

“I’m really really happy. I didn’t know how hard these things (medals) were to get,’’ Kane said.

“In Torino I was 19 and I was at my first Games. I put a run down there and snuck onto the podium. I really learnt to appreciate it in Vancouver,’’ he added, where he registered two DNFs and his best results were 10th (twice) and an 11th. He arrived in Canada in great form from several World Cup events but it did not translate to results at the Winter Games.

“I’ve learnt to appreciate just how hard they (medals) are to come by.’’

For Rahles-Rahbula, who carried the flag on crutches at the Sochi Opening Ceremony a week ago, he might be the most experienced of the Australians in Russia – a four-time Paralympian – but he nominated Kane as the leader of the alpine squad.

“Toby is the heart and soul of the team. I was so proud to see him up there (on the podium) today,’’ Rahles-Rahbula said, before his eyes began to well up.

“I’ve never cried over a medal before. I didn’t even cry at mine,’’ he said wiping away tears. The 30-year-old physiotherapist won his first Paralympic medals with two bronze in Vancouver.

“It’s such a tough week on the whole team from a results point of view. I wish I could have been on the hill with him.

“But I’m so proud of him. He’s been a wonderful ambassador for Australian skiing and not just Paralympic skiing.

“He handled all the pressure because he’s very philosophical about those things,’’ Rahles-Rahbula said referring to Kane announcing pre-Sochi that 2014 would be his last Games.

“He went out there every day and skied the best he could under really challenging circumstances. Today he really earned it because this event was drawn out over three days. That’s really tough.

“But I was quietly confident for him to put it down there so we’re all rapt for him.’’

Even being pipped at the post didn’t stop Gourley’s admiration.

“I’m really excited for Tobes. Obviously you look at it and see that you’re 0.2 seconds behind and think ‘Wow what might have been’,’’ Gourley said.

“But it is awesome to see Tobes win a bronze. And for Adam (Hall from New Zealand) to be fourth and me to be in fifth – you have three from Australia and the New Zealand in the top five and we really don’t even have a Super-G at home. You can’t complain about that.

“I gave it everything and that’s what we came here to do. It’s awesome to see Tobes up there,’’ Gourley added, who competed in his best event Giant Slalom tomorrow.

“I’m running through the three mistakes I made and where I lost more than 0.2 of a second, but at the same time, fifth is fifth and it’s my best ever result at a Paralympics and my best event is tomorrow.’’