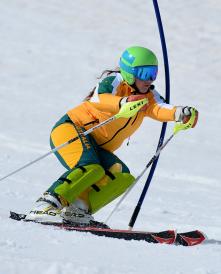 The Australian Paralympic Winter team is trying to regroup after a major oversight in breaking a racing equipment rule at the Sochi Games, which has caused the disqualification of NSW vision-impaired skier Melissa Perrine.

Perrine (NSW) and sighted guide Andrew Bor had put themselves into a medal-winning position with the second-fastest time down the Slalom course at the Rosa Khutor Alpine Centre during the first part of the Super-Combined event.

The second component – a Super-G race – was to be skied on Friday to decide the medals.

But Perrine will not be a part of the action. She and Bor were disqualified by the International Paralympic Committee (IPC) race jury, comprising technical delegates, race officials and referees.

The reason is because Perrine had a makeshift visor taped to her helmet, covering the length of her goggles to provide a shield from the tower lighting on the course. The Slalom was raced in dull, foggy conditions with constant rain. The lights had been switched on to light up the 200-metre course to help the athletes better negotiate the 52 gates.

But adding such a visor to the standard competition equipment of helmet and goggles is illegal.

“She did it about a month ago at one of the World Cups because the sun was shining right into her eyes,’’ Graham said, who has been head coach at the past three Winter Paralympics Games in Torino (2006), Vancouver (2010) and now Sochi (2014).

“Nothing was said back then but the rule is that you can’t attach anything to your helmet,’’ Graham said.

“They tested it out there (at World Cup) and decided to do it today. Andy and Mel made the decision. I didn’t know until they got to the finish line that they were using that. But that’s the rule.’’

Graham, who was at the finish line to monitor times and conditions for the three Australians who competed in the Super Combined today, admitted he was not fully across the equipment rules for vision-impaired athletes.

“I was fairly sure of the rule so when they discussed it about a month ago, I said `Make sure you know what the rule is’,’’ he said. “It’s a shared responsibility for sure.

“I don’t think they did (check the rules). Obviously they didn’t because if they would have, a bit more thoroughly, then well, they would have known.”

Graham said that his coaching staff up at the starting gates did not relay down to him that anything was awry with Perrine’s equipment.

“I didn’t hear anything about it. But someone noticed it up there,’’ he said. “I’m pretty sure that it was unofficially pointed out to the jury. They (race committee) also have someone monitoring equipment when they finish and they saw it and said it was illegal.

The Australian Paralympic Committee CEO Jason Hellwig is in Sochi and will meet with Graham, the coaches and athletes in the coming day.