Crazy, Analytical, Competitive: Inside The Mind Of Our Rising Star Of Boccia 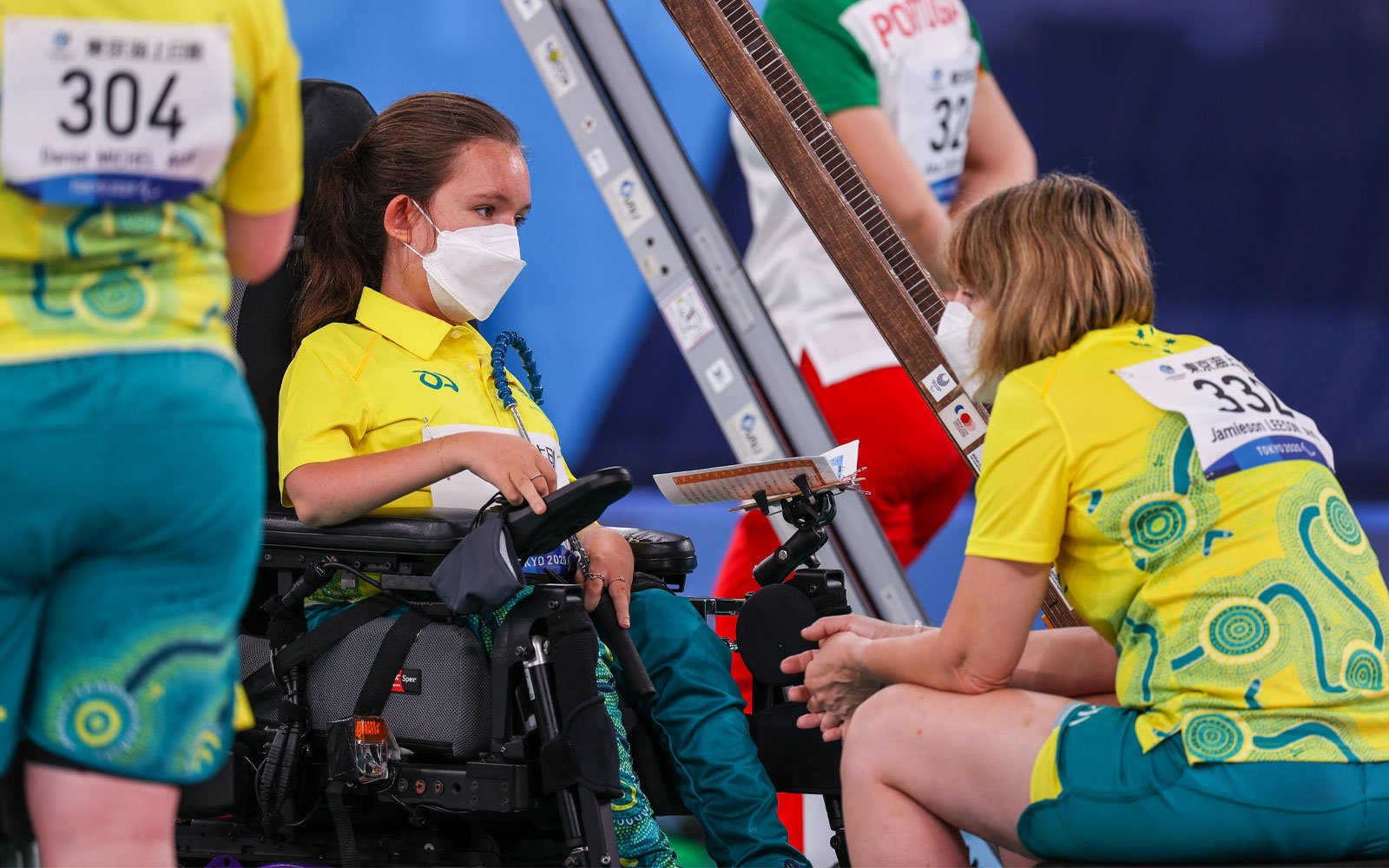 As in most of Australia’s rural centres, the community of Dunedoo in the NSW central west is bound together by sport.

The tiny town on Gamilaroi and Wiradjuri land features several sports facilities that buzz with activity every weekend year round.

Among them are fields and courts where rugby league, cricket, touch football, netball and even whip-cracking are contested. These are some of the sports Jamieson Leeson’s older siblings Codi and Skye played when they were growing up. For Leeson, however, joining in wasn’t even an option.

“Growing up with my disability, I wasn’t able to play any sport, which was a bit hard being from a very sporty family,” she said.

“I’d always go to my brother’s and sister’s football games, swimming or netball or whatever they were playing. I’d always be there on the sideline cheering them on.

“Then, when I discovered boccia, it made me feel like I belonged. It gave me a sense of identity, knowing that I was able to compete in a sport like the rest of my family.”

Leeson embraced her new identity with zeal. After being scouted at a competition in 2018 and starting to train in Sydney with national coach Ken Halliday, her talent and spirit drove her up the ranks. Last year, she and ramp assistant, her mother Amanda, took their place in the Australian Paralympic Team for Tokyo 2020 alongside Dan Michel and Spencer Cotie and their respective ramp assistants, Ashlee McClure and Zoe Dix.

Michel’s success catapulted him to world No.1 and Australia’s pairs to No.4. Between Michel, Cotie and Leeson the ingredients for a golden period in Australian boccia are all there.

“Jamieson’s a very intelligent young lady and the BC3 classification is all about intelligence, tactics and strategies, and memory,” said Halliday, who has more than 20 years’ of boccia experience.

“Boccia balls are all slightly different, they all do different things when you roll them down the ramp. We put a lot of hours into working out the best way to put each ball on the ramp to get them to be as consistent as possible. Jam’s very good at that. She really thinks things through.

“I’m sure she has the potential to become a top 10 singles player, or even higher than that. Paired with Dan, they will get to be No.1 in the BC3 pairs, for sure.”

It’s clear Leeson’s link with Michel will be a huge help as she continues to develop her game.

“Dan’s just on another level,” Leeson said. “I dream of being on his level one day. Not only training with him, but playing in pairs with him is amazing. It’s just such an honour. Hopefully we’ll win a couple more gold medals before the end of the year.”

Those events, including the World Championships in December, will test Leeson’s skills, but also her time management, much like last year’s road to Tokyo. Juggling online learning at Dunedoo Central School with preparing for the Games was tough but, with support from the school community, she achieved her goal of qualifying to study Economics at the University of NSW. The 19-year-old is again studying remotely but hopes to be on campus by year’s end.

The secret to Leeson’s ability to prioritise and succeed may be the sport she plays.

“I’ve got a bit of a crazy mind, a bit of an analytical mind and I definitely have a competitive side too. But boccia has given my brain a real ability to be able to focus and concentrate. I don’t think I’d be able to do my uni studies how I have been if I wasn’t playing boccia because, with the amount of concentration you need for the sport, it’s helped my life in so many other ways.”

What is it about this sport played in nearly 80 countries that requires such focus?

“The biggest thing that makes a successful boccia player is the decision-making. You have a time limit of six minutes for six balls and it goes pretty quickly. You have to make decisions quickly and they have to be the right decisions because any minor mistakes can ruin your game. Especially when you’re playing at a high level, you need to be concentrating, but also confident. It all comes back to your training and being able to focus at the right time.

“It takes a lot of practice on the court but I also see a sports psychologist to help with those things. We watch other players’ games, watch our old games and do a range of things to learn how to make those right decisions.”

If confidence is key, Leeson’s in good shape. Despite her young years, leading into the Tokyo Paralympics, she enthusiastically appeared in the media, including Channel 7’s The Morning Show, promoting her team and her sport.

“I used to do a bit of public speaking at high school and was on the debating team, which is probably where my speaking abilities came from,” she said.

“I also did a United Nations public speaking competition and we made it to the finals. But I think it’s mostly just about my passion to promote boccia. It’s an unknown sport for many people and I’m very passionate about raising awareness about it.

“Three or four years ago I barely knew about it. There are so many people out there with a disability who probably don’t know about it and I just think, it changed my life so how many other people’s lives could it change?

“Before I started playing boccia there were no competitive sports I could participate in. When I started playing competitively it gave me something to really focus on, apart from my studies. Especially now, it shapes who I am. I wouldn’t be who I am today without this sport.“

Halliday is excited for Leeson’s sporting future and made special mention of Leeson’s mother, Amanda, for her dedication.

“Coming from a town six hours away, it’s made the training schedule difficult,” he said. “But Jam’s got a dedicated mother who drives her those six hours and comes down and stays in a hotel room for two or three days so they can get a few days’ training in. It’s not easy for either of them.

“They’ve done an incredible job in the last 12 months. Jam’s had some health issues, been in and out of hospital, been managing uni and done very well to be able to play boccia at a high level. She’s pretty much an incredible athlete.”