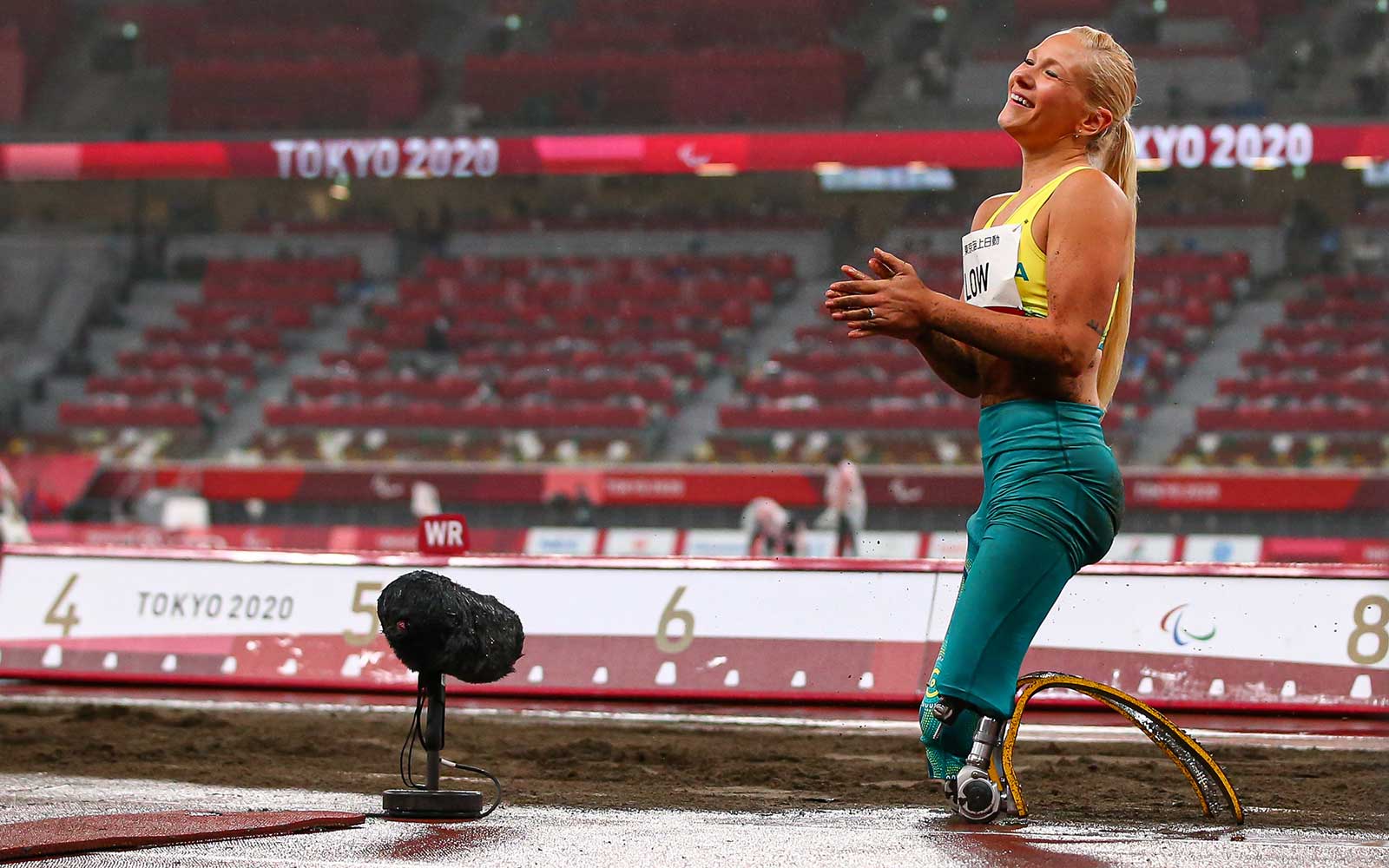 Gold in two consecutive Paralympic Games and for two different countries is the Vanessa Low story from the Tokyo Olympic Stadium on Thursday night.

But there were a few others as well. It was an all-girls night out with four Australians in four finals and coming away with two medals – Low’s gold in the Long Jump (T63) and Maria Strong’s bronze in the Shot Put (F33).

Low dominated her competition from start to finish. Her second, fourth and sixth jumps broke her own world record three times, which now sits at a mighty 5.28m for the leg amputee class.

Low initially set the world mark of 5.07 in Canberra in February last year. She was on track then to jump well with the Paralympics originally scheduled for August 2020.

But on a rain-soaked night in Japan she showed she’d lost nothing in the talent department by having to wait another year until August 2021.

And now she has back-to-back long jump gold medals from Rio 2016 – for her native Germany – and Tokyo 2020 for Australia after marrying sprinter Scott Reardon in 2018.

“Being able to share it here alongside of Scott… what more could I ask for?” she said. The pair hugged each other in the athletes’ tunnel just under the stadium as the realisation dawned on them.

“Both of us had a bit of a tough wait into these Games, so being able to go home with a gold medal for us, for Australia, is even more special.”

She had no mark in mind when she stepped out onto the long jump runway in her two carbon fibre blades. Low, 31, lost both of her legs above the knee as the result of a train accident in Germany when she was a teenager.

“I knew I needed to jump far because I didn’t know what I was up against. I hadn’t seen all the girls in so long and one of my main competitors missed the World Championships as she was coming back from a doping violation,” she said.

Silver medallist tonight Martina Caironi (Italy) had a one-year suspension reduced to four months in 2019 after an ointment her doctor recommended to stop inflammation in her amputated leg, contained an illegal substance.

“So I wasn’t sure how far I needed to go to win this. I really tried to remember to have fun and the more I embraced the experience the farther the jumps went,” Low said. “My last jump I knew I had already won so I just really wanted to show what was possible.”

“The rain doesn’t bother me as much as the heat. It only bothered me a little not having shelter – somewhere to dry your legs and get rid of the wet sand sticking to me.”

Low had overwhelming pressure on her coming into Tokyo. She had won the world title in Dubai in 2019 and was the reigning Rio gold medallist in 2016.

“I think pride is probably the emotion I feel the most – not necessarily what I did tonight but what Scott and I have managed to do through a few difficulties,” she said.

Reardon lost his right leg in a farming accident when he was 12. He won the Rio 100m gold medal for his class and finished 5th in Tokyo.

“Today showed the world that we aren’t defined by what happened to us but by the choices we take and the life we create for ourselves,” Low said.

“That’s what the Paralympics does. It gives us a sense of empowerment. I felt that today.”

On the other end of the stadium opposite the long jump pit, Strong was on song in the seated Shot Put for athletes with cerebral palsy. She broke the Paralympic record set in Rio with a huge PB of 6.63 in her fifth throw.

Strong sat in bronze-medal position for most of the competition until China’s Qian Zao moved up into silver with a 6.95 throw, relegating the Australian to 4th.

However, a protest lodged by Algeria – whose athlete Asmahane Boudjadar (7.10) defended her Rio gold – over an illegal throw from Qian was upheld. That elevated Strong to bronze.

“Maria has had her struggles as she lives alone in Melbourne, so had all those Covid lockdowns and then had to deal with the Games being postponed,” Australian team throws coach, Hamish MacDonald said.

“So to hold her nerve and do what she did tonight is pretty awesome. I know she’s started a lot later than most others – (she turned 50 in 2021) but I hope she continues because she’s clearly competitive. I hope this result spurs her on.”

Elsewhere rumours that Angie Ballard at 39 years, might make Tokyo her swansong were off the mark in the 400m (T35) final. She was heading for the podium until the final 15 metres of her 400m (T53) final finishing 4th in 57.61s.

The one-lap race was run in extremely wet conditions but Ballard was thriving.

“This is where my longevity is a thing. I’ve been racing in the rain for 20-odd years. I’ve done a lot of big comps, a lot of training, and a lot of little comps in the wet. I like the rain – it almost feels cosy.

“Tonight that fourth is huge for me. Everyone has had a tough time lately and after Rio I was prepared for the hard stuff and another great four years,” Ballard said.

“But I’ve learned that different hard stuff can come at you – it’s been pretty horrible at times. But I still love what I do. So coming here and getting a bit closer to where I was both in terms of the world and my joy for racing, has just been huge.

“I wasn’t happy with the 7th placings I had in the other races (100m, 800m). It would have been nice to get a medal but I showed tonight I’ve still got it. It makes me both hungry and excited that this is where I’m at.

That was Ballard’s 23rd Paralympic final at her sixth Games. And it won’t be her last major event.

“There’s a 1500 in the Commonwealth Games (2022 Birmingham) and I was a silver medallist last Comms (2018 Gold Coast), gold medallist the Comms before (2014 Glasgow). There is also World Para-Athletics Championships (Kobe) a month later so ‘the combo’ is on the cards,” she said.

“Look it was a pretty wet and soggy one out there tonight. The fact the girls were able to go as fast as they did is so incredible,” said Ault-Connell who wrapped up her track program tonight and how heads to Sunday’s Marathon.

“We’ll try and get a nice recovery roll in ; get the body as prepared as we possibly can. Then I get up early Sunday morning and go race 42 kilometres,” she said, adding her last Marathon was in Singapore in December 2019.

“So that was pretty hot and not dissimilar to the conditions we were expecting in Tokyo to begin with. But now they’re forecasting it to be wetter and much cooler.”