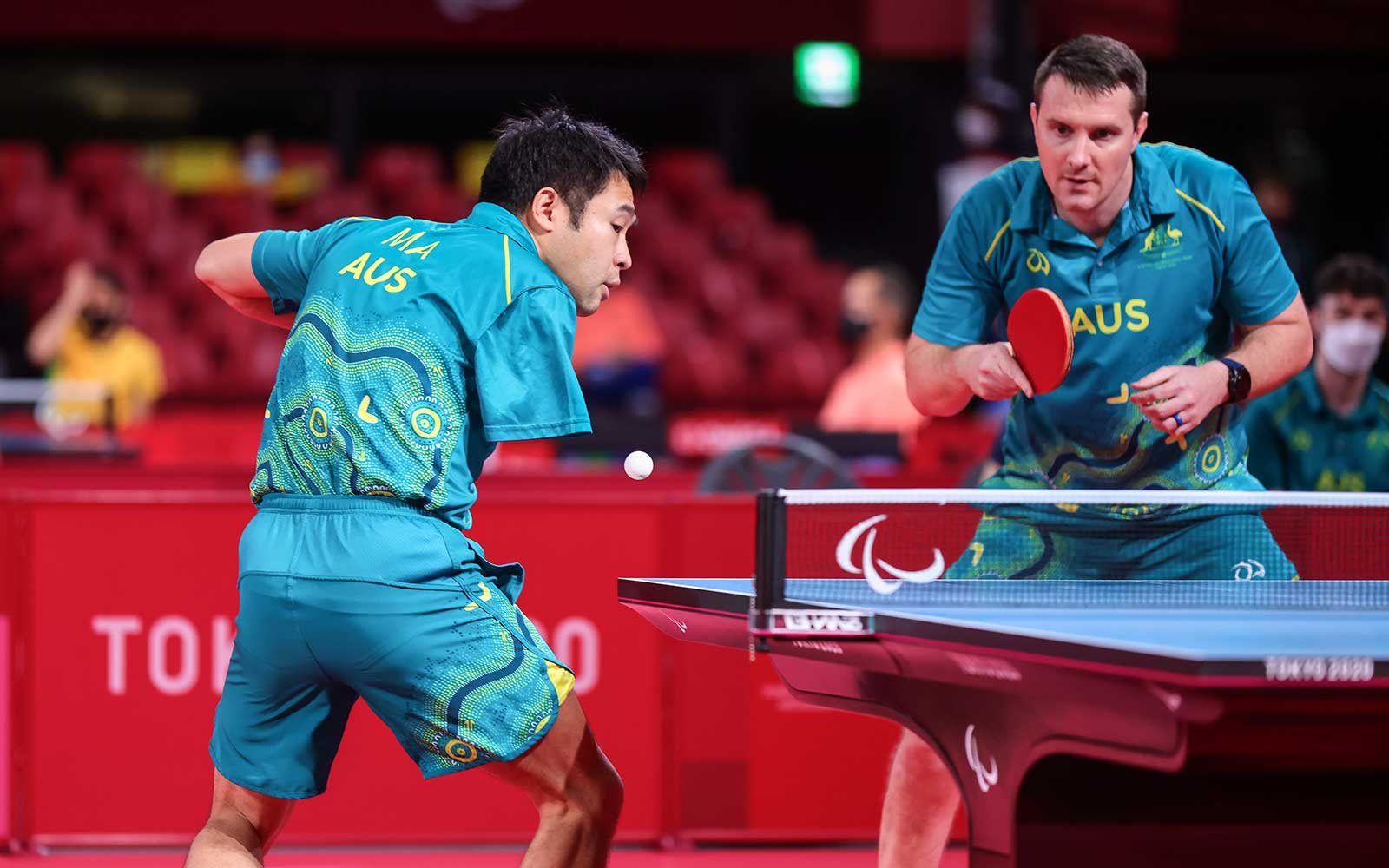 Australia is guaranteed another medal at the para-table tennis in Tokyo, as the trio of Ma Lin, Joel Coughlan and Nathan Pellissier advanced to the semifinals of the Team event class 9-10.

On Wednesday the Aussies will face Nigeria, after the African team upset favourites Montenegro 2-0 in their quarterfinal.

Australia are guaranteed at least a bronze, which will break the record for most medals won by an Australian para-table tennis team at any one Paralympic Games, with the current standing at four from Tokyo 1964.

Ma Lin and Joel Coughlan started the day delivering an emphatic 2-0 win against Brazil in the class 9-10 round of 16, to go on and face no.2 seed France in the quarterfinals.

Australia took the lead with a convincing 3-0 in the opening doubles match against France, leaving it up to Lin Ma to clinch qualification against Mateo Boheas, a clash between the Men’s Singles silver medallists in classes 9 and 10 respectively.

Ma trailed one game behind with Boheas threatening to take the second, but the Aussie mounted a spectacular comeback to win the game 14-12. The Australian kept his momentum going until the end, claiming a 3-1 win that was met with excitement by his teammates off court.

“That was very intense, edge-of-the-seat stuff,” Coughlan said after Ma’s match. “Honestly, it’s so hard to sit there and watch the game, it’s much better to be out there and play it.”

Coughlan said he and Ma were expecting a tough contest against the French and was pleased with the way the pair approached the all-important opening doubles.

“We thought it could go down to the wire in all three matches, if it went that far. We were ready for a battle when we came out and luckily enough we took it out in two.

“Ma played awesome and we had a great double. We’ve been doing a lot of doubles at the staging camp in Melbourne and have been getting better and better as a combination. We felt pretty comfortable with how we played this morning and we were confident going in. We knew they were going to be tough, but just got off to a good start and kept that roll going.”

The Aussies will face Nigeria tomorrow for a place in the final. Coughlan defeated class 10 Alabi Olufemi 3-0 in the group stage of the Singles, which will give the Australian some confidence going into the match.

“Again, doubles will be key to get us off to a good start. If we can combine well in the doubles, we’ll do well. Let’s finish the job off and go a bit further.”

In the class 6-7 quarterfinal, Jake Ballestrino and Trevor Hirth were defeated 2-0 by Great Britain, who fielded two medallists from the Singles in William Bayley (silver c7) and Paul Karabardak (bronze c6). The Aussies lost the opening doubles 3-0, with Hirth going down in straight sets to Bayley in the first singles match.

Despite not getting the result they were after, Hirth said it was the thrill of a lifetime to be here.

“We have a team of 11 athletes (para-table tennis), but in Brisbane (2032) we could have 30, this is the impact these Games will have back home. To get para-table tennis live television back home is huge and there is a lot of development work going on… the success of the rest of our team… it is only going to grow.

The duo were making their Paralympic debut, with Ballestrino very happy to share the experience alongside his fellow para-table tennis teammates.

“It’s been mind blowing, I didn’t really know what to expect coming into it so I just tried to enjoy the ride. The team is amazing, it’s less of a team and more of a family… we’ve got each other’s backs, as you saw out there with all the matches being played and all the cheering and supporting and the Aussie spirit.

“I was happy to go out there and give it my all, it makes it a lot easier when you’ve got a quality human and a quality table tennis player as Trevor is, right beside there,” he said.

The Aussies will continue their medal hunt on Wednesday with the Women’s Team event class 9-10 quarterfinals scheduled for 11am AEST. Australia will face Hungary with two gold medallists and a world no.2 on the team, with Li Na Lei, Qian Yang and Melissa Tapper taking part in the event.

The Men’s class 9-10 will be on court at 3pm AEST. Once again the athletes’ stand will be dotted in green and gold as a tightly-knit Australian team will no doubt go out in numbers to support their mates on the court.

“You can’t ask for a better team,” Coughlan said. “The whole team was here. The girls didn’t play today, they didn’t have to be here, but everybody is here. It’s fantastic.”