Natalie beats challenges in her quest for more Paralympic medals 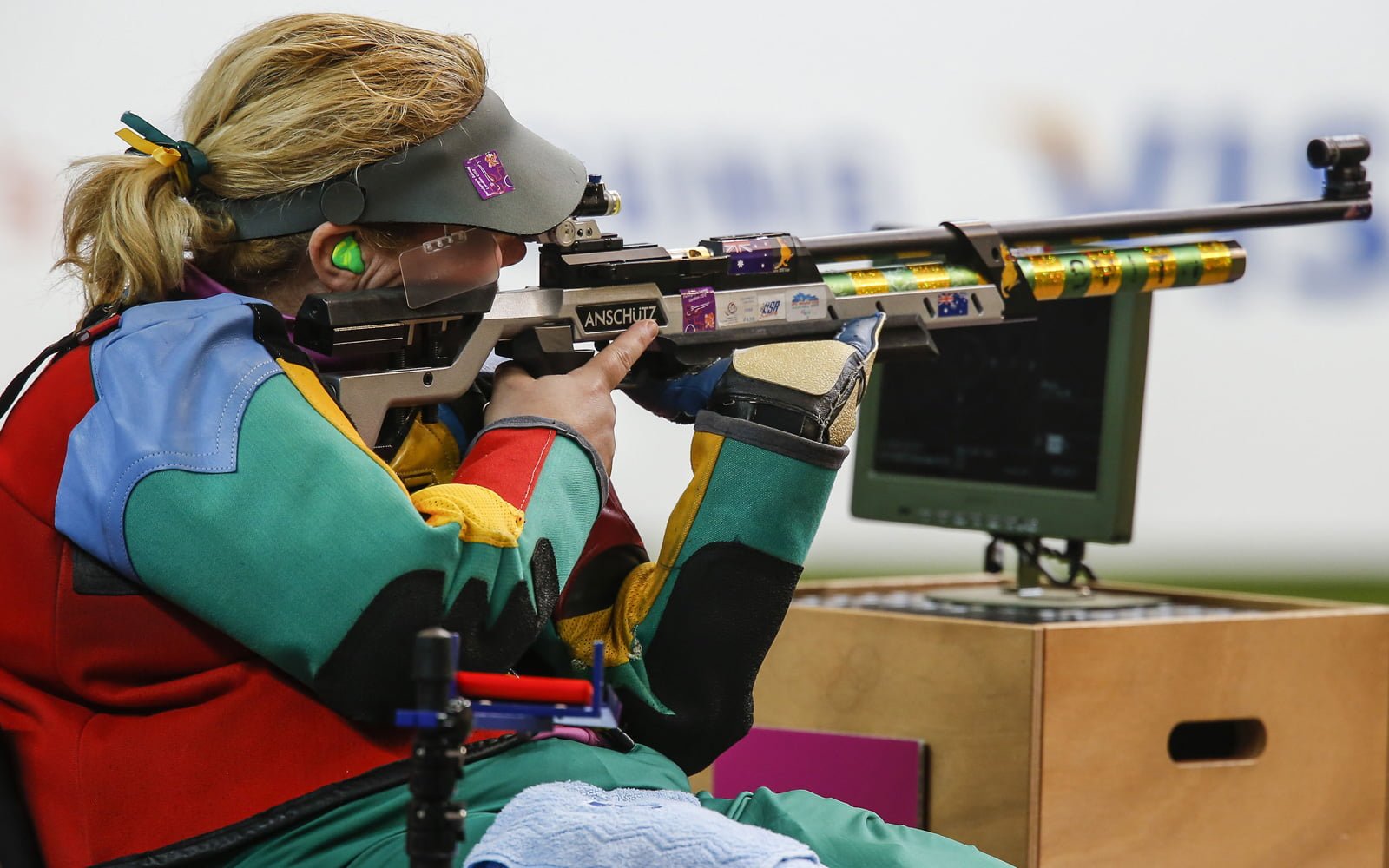 Natalie Smith has a happy knack of conquering the seemingly impossible. Overcoming obstacles is like target shooting. You take aim at the target, you focus and concentrate, then pull the trigger and enjoy the result.

In just under 12 months time, Smith is aiming to line up for her third Paralympic Games in Tokyo where she hopes to contest the women’s 10m Air Rifle SH1 event. Watching proudly will be her husband, Stuart, and their young son, Daniel.

A gold medal winning performance, after a shoot-off, at the World Shooting Para Sport championship in Chateauroux, France in 2018, has her aspiring for another medal podium finish at the Tokyo Paralympics nine years after her unexpected bronze medal at the 2012 London Paralympic Games.

Growing up in Victoria, Smith was an active sports participant and worked as a surgical theatre nurse for eight years.

Her first love was equestrian and was a state level dressage and eventing competitor. She also enjoyed the adrenalin rush of wakeboarding and sky diving.

However, her life turned upside down in 2009 when she slipped on a rock when hiking on a tourist path near Ayres Rock and suffered spinal cord injuries resulting in paraplegia.

“I went on a tourist walk and came back different,” said Smith.

Smith wasn’t going to let her injury limit her active lifestyle, so she and husband Stuart headed north to Queensland in 2010 which was the only state to offer the Walk On rehabilitation program which assists a person with a spinal cord injury improve and maximise their functional ability and help them lead a more independent life.

Smith then became involved with Sporting Wheelies and attended a Come and Try day at the Belmont Shooting Complex – a 25 minute drive from her Meadowbrook home in south-east Brisbane.

“It was a time where I was struggling to find things to do that felt normal after my accident. It gave me more a sense of control over everything I was doing,” she said.

Smith had good genes as a target shooter. Her late grandfather Norman Lutz was selected in the Australian Olympic Team for the 1956 Melbourne Olympics but was forced to withdraw from the Games after suffering a heart-attack.

“People have told me he was an amazing shooter and a gunsmith. My dad says he wishes he could be around now because he would have been exceptionally helpful with equipment. He used to make his own stocks,” she said.

Right from the outset, Smith showed eye-catching ability with a rifle but for many in the shooting community, they believe selection for the London Paralympic Games was unachievable.

“A lot of people said you won’t make London because it’s not far away and my husband said ‘why not. Let’s give it a go’,” recalled Smith.

“It was never the aim to shoot at the Paralympics. It was to be the best shooter that I could be and see where they could take me,” she added.

However, Smith continued to excel and she made her international debut at an unofficial World Cup event in London in 2011. But it was the travel to London, and not the competition, which she dreaded the most.

And her fears were immediately realised when she checked into her London hotel only to find she was booked in a second floor room with no elevator access.

Later in 2011, Smith travelled to Fort Benning in the USA where she won the gold medal.

“It (her gold medal win) was a shock to everyone and a shock to me. No one expected anything. I didn’t expect anything, and we were pleasantly surprised,” she said.

Towards the end of the tightly contested final, Smith had slipped into fifth position with one shot remaining. “I thought that’s it, I’m done,” she recalled.

With a medal on the line, Smith’s theatre nursing and past sports experience kicked-in.

“I’ve always been competing. I don’t really suffer from nerves because I’ve always had to work in high pressure situations, and I enjoy that,” she said.

“The good part was that I actually hadn’t been doing it for quite so long. All I had to think about was just shoot it, and not the pressure where I needed to end up. I just needed to focus on that shot and do it,” she added.

Smith was the last athlete to fire her final shot and registered a score of 10.5 to leapfrog into the bronze medal position.

Her athlete monitor showed she was placed third momentarily before the scores were publicly displayed on the crowd scoreboard.

She then had the satisfaction of turning to the see the reaction of her husband, her parents-in-law and the Australian team members when the final scores were displayed on the scoreboard.

“It was amazing to see their anticipation and then their joy when it (the score) actually came up,” she said.

With one sporting obstacle successfully completed, Smith then faced an even bigger challenge – giving birth.

Doctors had warned Smith and her husband that their chances of having children were low because of her disability, but once again proved the doubters wrong when she gave birth to Daniel in April 2014.

She returned to shooting soon after giving birth but suffered a series of infections and was later hospitalised and forced to undergo further surgeries which sidelined her from the 2014 World Championships.

But she returned to the world circuit in 2015 and qualified for the 2016 Rio Paralympic Games where she finished just outside the medals in fifth position.

The delay of the Games by 12 months has proved to be a blessing in disguise for Smith as the extra time has also allowed her to fully recuperate from some injuries.

She is now back practicing at the Belmont Range with her son Daniel in tow. “He’s my little champion. He’s a real social butterfly,” she beamed.

And he is her constant reminder that anything is possible.