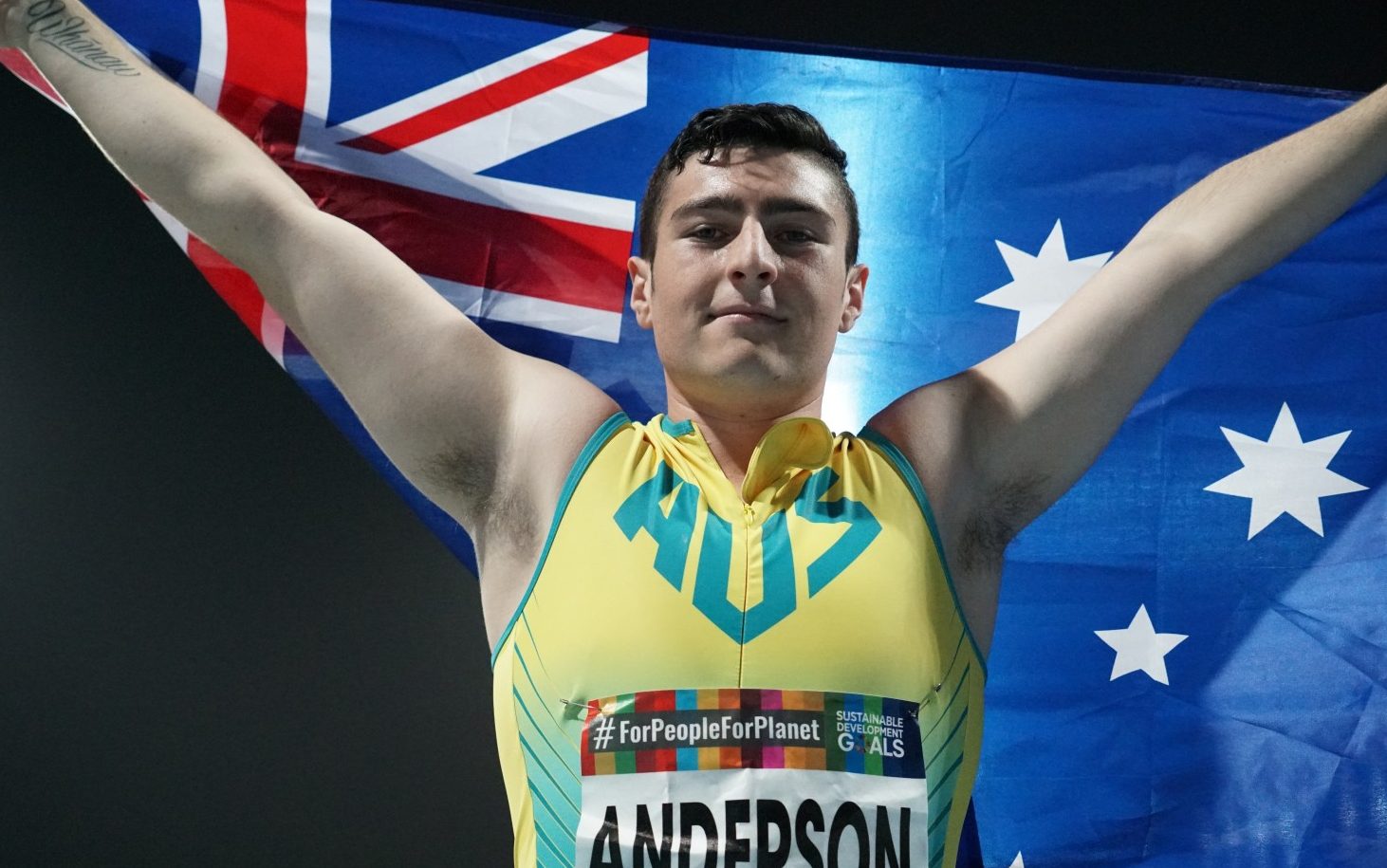 Australian athletics has a rising star in newly-crowned world champion Corey Anderson, who silenced the rest of his men’s javelin F38 competition at the 2019 World Para-athletics Championships in Dubai, UAE, by unleashing a world record-breaking throw in his first attempt.

The 19-year-old was breaking his own world mark by the way – a 55.14m hurl he laid down at the National Championships in Sydney, NSW, last April.

“I feel so confident now. My confidence level has gone from zero to 100. I think I can do a lot of things now. I’m a bit of a showman so I want to keep this feeling going,” Anderson said of his debut on the world stage.

At his maiden World Championships, having only come under the Paralympic program at Athletics Australia two years ago, Anderson has made the rest of the world sit up and take notice ahead of the Tokyo 2020 Paralympic Games.

And he had to do it under some duress. Two days ago, he rolled his left ankle at training. Warming up for his final, he rolled his right ankle. He immediately had it iced and strapped.

The injury played a role in Anderson and coach Desmond Davis formulating a plan to let loose as much power as he could on the first of six attempts, in case the ankle began to swell up and restrict him.

“That was more nervousness than anything,” Anderson said. “It was more of, ‘I need a big one out so they can chase’. And they did chase, but didn’t get me.

“Once I threw that world record, I just eased into the rest of it.”

Davis said he had never met someone with such clear-cut goals in mind.

“Once he latches onto something, he’s like a dog sinking his teeth in and staying at it,” Davis said.

“So when he gets out there he focusses pretty well. And he’s got a very good technique – we’re still building on that – and hopefully at Tokyo he peaks again.”

Anderson’s gold moved Australia into seventh on the overall medal table, with a total of three medals (two gold, one silver) after three days of competition at the nine-day event in Dubai.

It was a case of duelling javelin world record holders, as well as Australian teammates in the javelin final.

Jayden Sawyer broke the world record with a 52.96m throw at the 2017 World Para-athletics Championships. Then up stepped Anderson at Nationals this year.

Sawyer took a while to find his rhythm on Saturday – his biggest throw was his third (49.42m), but that only placed him fifth. Australia’s third competitor, Cam Crombie, finished seventh (45.87).

“I just couldn’t really get it going tonight, which is upsetting, but unfortunately that can happen in sport,” Sawyer said.

“The conditions were beautiful, it was a good temperature, but I was just lacking a bit on the runway. I’ll take a short break and then get back into hard work again to fix it up.”

The 2015 world champion in the men’s shot put F20, Todd Hodgetts, also found it hard to hit his straps in his pet event. He has a five-medal strike rate at majors over the past six years, including Paralympic Games gold in 2012.

“I couldn’t quite get a good grip on the shot put,” Hodgetts said. “I’m okay and I’m feeling great physically. I’m just disappointed.

“But this stuff can happen so I’ll go home and reset. It’s all good.”

Tamsin Colley set a personal best of 31.77 in her women’s 200m T36 heat to book herself a spot in her first major final. She clocked a slower 32.03 in the final to finish eighth.

Colley received a couple of messages of support from her hero, Olympic champion Sally Pearson, just prior to her race.

Eliza Ault-Connell followed up fifth in the women’s 100m T54 final with fourth in the women’s 800m T54. She was lying in second place at the bell lap with a couple of competitors drafting behind her. Americans Amanda McGrory and Susannah Scaroni then passed the Australian with 200 metres to go.

“I should have just backed off a bit,” Ault-Connell said. “But something just told me to keep on going and probably that was the wrong choice. But you know what, you learn.”

“It was hard. It wasn’t what I expected result-wise. Again, we’ve got to put that behind us and back up again tomorrow [for the women’s 1500m T54 heats]. My training and preparation have been great, but tactically I’m not there yet.

“I hope to race a little smarter next time.”