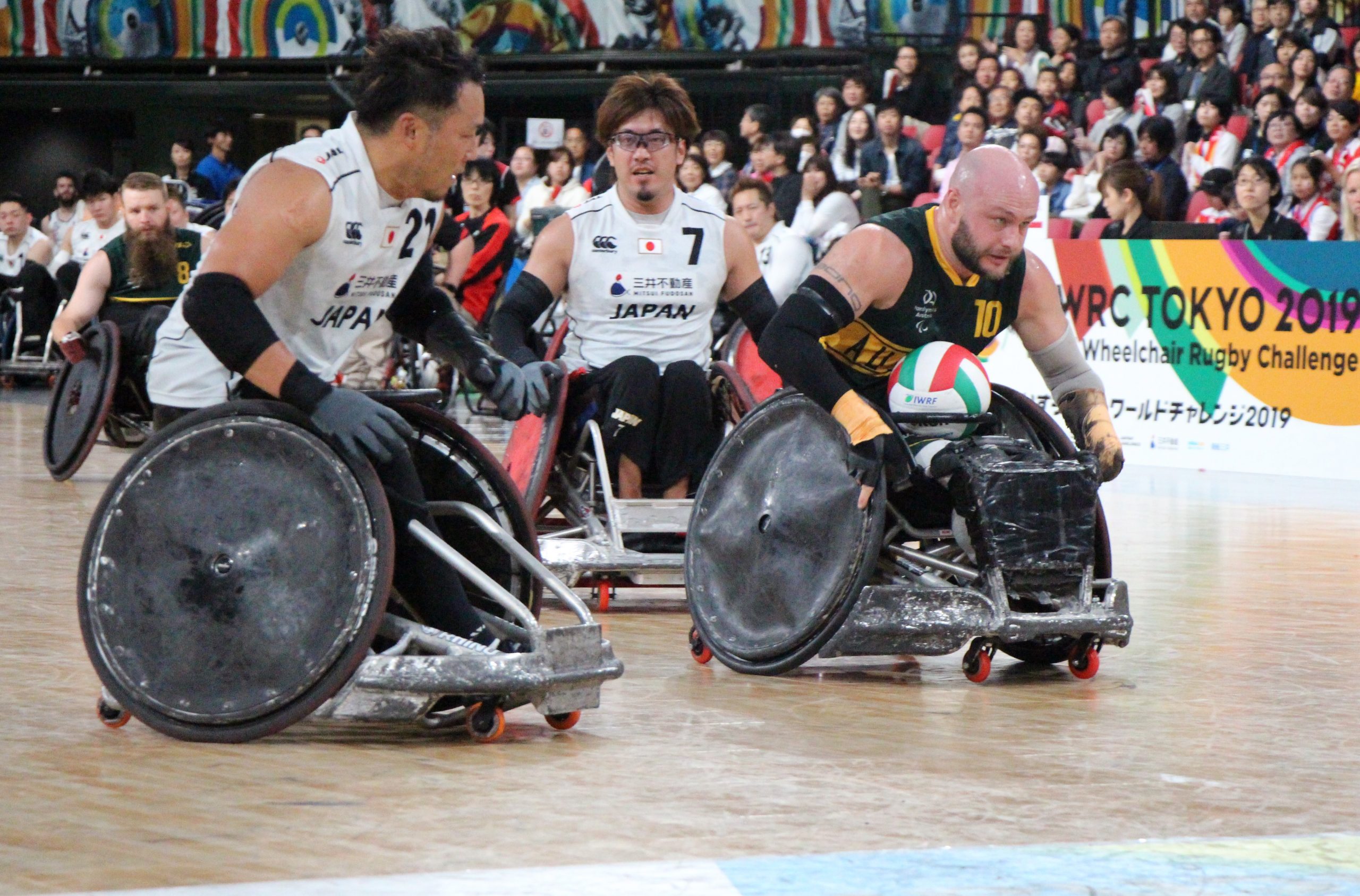 The Australian Steelers held on for a 57-56 semi-final victory against Japan at the World Wheelchair Rugby Challenge (WWRC) tonight in Tokyo to silence a boisterous Japanese crowd.

Victory was sweet revenge for the Steelers, who carried the scars of their heartbreaking one-goal loss in last year’s World Championship final against Japan into battle.

The contest between the world’s two best teams lived up to the hype, and it seemed destined for overtime in the dying seconds when Australian captain Ryley Batt was forced to throw a long, high-risk pass with the Japanese defence swarming.

A turnover looked likely and would have handed Japan a golden chance for one more attacking play to level the scores just before full-time. The sold-out crowd were in full-voice which only propelled the home team further.

But it was Mick Ozanne, a 0.5 player, who came up with the decisive play. The Queenslander made a career-best catch under extreme pressure to secure the ball, just as the Japanese defenders arrived to hammer it loose by force.

Ozanne withstood the barrage and stole Japan’s hopes of thrilling their home fans with an appearance in tomorrow’s gold medal match. His excitement and relief was hard to contain.

“It’s something we practice at training a lot, so I was kind of confident of getting the ball. But when I had everyone coming down on me, I was pretty worried. I’ve been stripped a few times before and we’ve had some hard overtime games against Japan in the past so I’m just glad I caught the ball and held onto it,” Ozanne said.

“It was relief. It was just pure relief, and then I had to switch on again and make sure we won the game and that Japan didn’t score a long-range goal right at the end.

“This is probably the biggest crowd I’ve ever played in front of. The atmosphere was amazing, the Japanese fans were cheering and loud and it was really hard to communicate on court and hear the bench, so it’s been a great experience.”

“It was a crazy end to that game. I thought we were going to overtime for sure. But luckily our saviour Mick Ozanne was there in front court to take the ball and secure it. I knew he was going to get it, but I was nervous,” Dubberley said.

“Those Japanese players were coming in hot to get him. But thankfully, we had our twin jets there, Ryley and Bondy [Chris Bond], racing across to him to help, but Mick did a great job to hang on and cover that ball. I’m stoked for him.”

Australia held a 28-26 lead at half-time but three turnovers in the next eight minutes allowed Japan to level the scores again at three-quarter time.

And with just one turnover likely to prove the difference in the final term, Australia’s most experienced line-up of Batt, Bond, Ozanne and Ben Fawcett delivered a perfect offensive display and were able force one from Japan to shut the home side out.

“These games between Australia and Japan are the best games to watch in wheelchair rugby. They are just classics, every one of them, and this one didn’t disappoint,” Dubberley said.

“I thought we showed great composure. We knew it was going to be hot, we knew that Japan were going to have their good run at some stage and when we gave up three turnovers in the third quarter, we just had to weather that storm.

“I was always confident we could do it. We’re a phenomenal team, we’re number one in the world for a reason, and it’s great to get to the final and to have knocked Japan out in their own tournament.”

Australia now move into tomorrow’s gold medal against the United States, who advanced to the final with a 49-48 victory against Great Britain.

The Steelers and United States met in the pool rounds on Friday, with the Americans posting a 55-51 victory.

The gold medal game, which will be broadcast live on Japanese tv channel NHK, will be at 6pm (AEDST). Japan and Great Britain will play for bronze at 2:30pm (AEDST).

The WWRC sees the top eight teams in the world do battle this week, in a major test event for the Tokyo 2020 Paralympic Games next August.