Best mates prevail to place on the podium 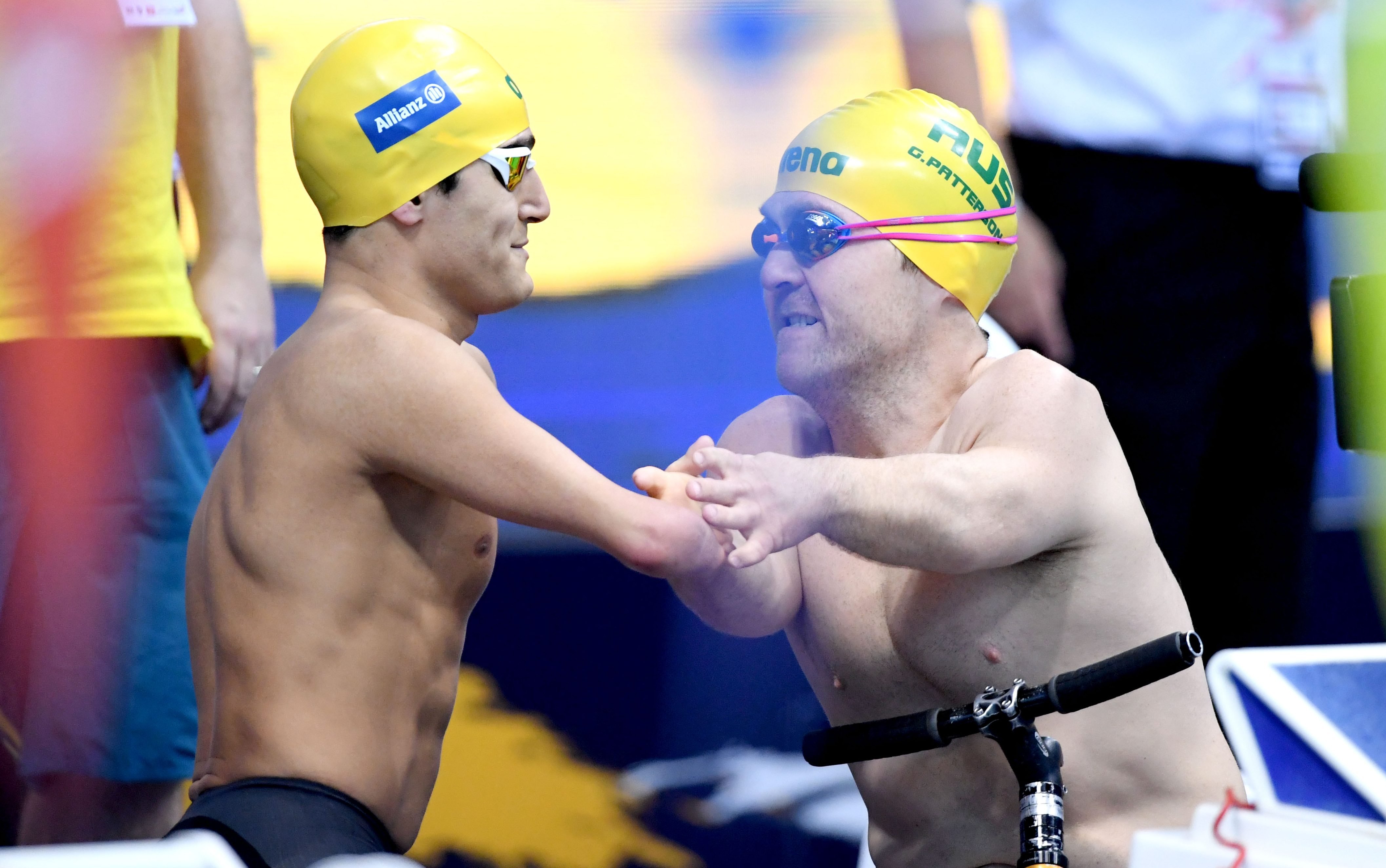 The Dolphins’ dynamic duo of Ahmed Kelly and Grant ‘Scooter’ Patterson prevailed in the Men’s 150m Individual Medley SM3 to proudly share the podium on night six, after claiming silver and bronze respectively at the 2019 World Para Swimming Championships in London.

Best mates out of the pool and rivals in, Kelly and Patterson battled it out in lanes four and three with Kelly pulling away from his compatriot during his favoured breaststroke leg to also gain territory on early leader, Mexican competitor, Diego Lopez Diaz. In a tight finish, and with the crowd roaring, Kelly touched for silver in a new Oceania Record time 3:01.17, slightly behind Lopez Diaz who took gold in 2:57.61. It was a terrific result for the Aussie teammates, with Patterson setting a new personal best of 3:05.92 to achieve bronze and secure a spot on the podium with his good friend.

“It feels great to finally get an international benchmark medal – I’ve worked so hard to get there, a little disappointed I didn’t hit my PB, but I gave it my best shot,” he said.

“I could feel the emotions from the crowd in how close the race was and no matter how much I was hurting – which I was – I was just trying to push through it to the end as best I could.”

Reiterating Kelly’s sentiments, Patterson – who also picked up a silver medal on night one – added that it’s always wonderful to race against Kelly on the world stage.

“How often do you get to see two best mates race somewhere overseas at an international competition in a final – I think that’s pretty cool,” he exclaimed.
“That’s all I wanted in this race was to stand on the podium with him, I didn’t care what colour, and just do Australia proud.”

South Australia’s Jesse Aungles also secured his second medal of the meet after nabbing third place in the Men’s 200m Individual Medley SM8. Clocking a time of 2:27.45 – just 0.20 seconds off his personal best – the 24-year-old said while there’s plenty of room for improvement, he’s been delighted to win a silver and bronze medal this week.

“From one to two, it’s fantastic – it’s been a really good meet and I’ve really enjoyed it,” he said.

“At Para Pan Pacs last year I was feeling really good and compared to that preparation it’s been nothing like it, so I was a bit worried coming in here, but I’ve had some really good technical changes that are going fantastically well, and I think that really helped get me through. I’m so close to that PB I think I’ll be able to work on it heading into next year.”

After scoring a bronze medal in the 100m Backstroke S9 on night two, Timothy Hodge collected his second bronze medal of the champs – this time in the Men’s 200m Individual Medley SM9 with a time of 2:17.68. Leading for a good portion of the race and swimming from lane four, the Auburn swimmer had challengers from lanes five and six, with Russia’s Andrei Kalina ultimately stealing gold in 2:16.67 and Italian Federico Morlacchi taking silver in 2:17.66. In such a tight finish, only 1.01 seconds separated first from third, and two one hundredths of a second from silver to bronze.

In the men’s and women’s 100m Breaststroke SB9 events it was a similar result for Rick Pendleton and Keira Stephens, who both narrowly missed out on a podium finish placing fourth. Pendleton clocked 1:09.78, just 0.12 seconds behind bronze medallist, Dmitrii Bartasinskii (1:09.66), while Stephens posted 1:21.72 in her race.

Lining up in a hot field for the Men’s 200m Individual Medley SM14 race, Liam Schluter placed a commendable fifth – putting a time of 2:13.50 on the board. Japan’s Dai Tokairin snatched the gold from lane six in a new world record time of 2:08.16.

After taking home his very first world champs medal last night – a bronze in the 100m butterfly S10 – Col Pearse returned to the pool on Saturday night. In his final event of the meet, the young Victorian recorded a new personal best time of 1:05.50 in the Men’s 100m Backstroke S10 and placed sixth overall.

In the following and corresponding race for the women, Jasmine Greenwood, who also picked up her first medal last night, finished fourth in 1:10.80. In a close touch for podium places, the 14-year-old was only 0.11 seconds off a bronze medal – showing plenty of promise for her future.

In the final event of the night – the Mixed 4x100m Freestyle 49 points – the team of Jenna Jones, Katja Dedekind, Braedan Jason and Jeremy McClure placed sixth in 4:03.89.

After the sixth night of the competition, Australia sits 17th on the medal table, with two gold, seven silver and 13 bronze.