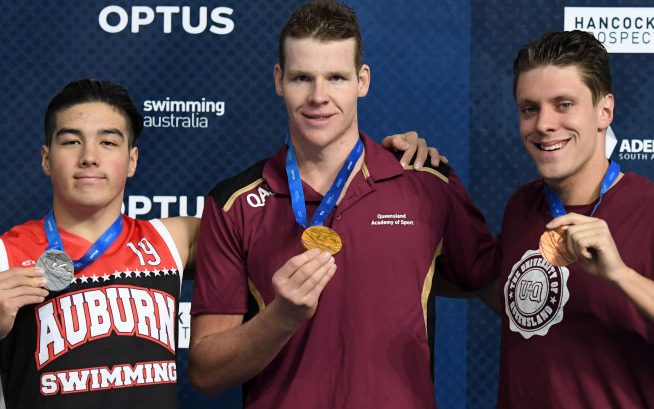 Kawana Waters’ Liam Schluter (S14) swam his way into the world record books for the men’s 200m freestyle Multi-class on the fourth night of the 2019 Hancock Prospecting Australian Swimming Championships.

The world record marked his second of the meet, after also smashing his own world record time in the men’s 400m freestyle Multi-class. With the news of his achievement still sinking in, Schluter couldn’t contain his excitement.

“It felt awesome, coming in tonight just thinking about the 200m free and preparing myself for it and doing a really good time, I wasn’t thinking I would break a world record, but I’m so happy,” Schluter said.

“My coach said he was very proud of me and just gave me a big ‘well done’, he’s very happy for me, and my mum had a nice big tear in her eye. She came down just before to congratulate me and phone has been buzzing since my race.”

Jake Michel (S14) added another gold to his tally at the Championships after winning the men’s 100m breaststroke Multi-class ahead of Grant Patterson (SB2) from Central Cairns and Timothy Disken (SB8) from St Hilda’s. With a time of 1:06.68, Michel will represent Australia for the first time at an international event at the World Para-swimming Championships later this year.

Paralympic gold medallist Tiffany Thomas Kane stood atop the podium for the second time of the meet after winning the women’s 100m breaststroke Multi-class. Having already qualified for the team travelling to the World Championships in the women’s 200m individual medley Multi-class, the Monte product claimed the title ahead of Ashley Van Rijswijk (SB14) from Wagga Wagga and Fraser Coast’s Keira Stephens (SB9).