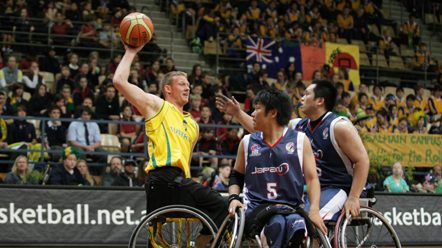 While on a mission to prove to the world how able-bodied he was in the sports world, despite his disability, five-time Paralympian Troy Sachs OAM became the best wheelchair basketball player of his time.

That relentless drive and commitment to be elite will be acknowledged at the 33rd Sport Australia Hall of Fame Induction and Awards Gala Dinner – proudly presented by Etihad Airways on Thursday 12th October 2017 at Palladium at Crown.

Sachs was born without a right tibia and a deformed foot, which led to amputation below the knee before he was three, but it did not stop him experiencing an active childhood.

“I think there was always a bit of me trying to prove how able I was,” Sachs said of his pursuit to play elite level sport.

“Maybe it’s DNA as well, my dad was very determined, and mum was business savvy – we were a family of hard workers.”

“School wasn’t the be all and end all, looking back it was always going to be something physical involving sport and wheelchair basketball was it.”

His career in wheelchair basketball included five Paralympic Games that yielded two gold and a silver medal along with championships with multiple professional clubs around the world.

A world record 42 points in the gold-medal match at the 1996 Paralympic Games in Atlanta was an exclamation point at a time when Sachs was widely considered the most dominant player in his sport.

Yet it all began at a grassroots level with a long four-hour round trip up the highway from Bulli three times a week with his brother to the nearest team for training.

“As soon as I jumped in I felt free, and on a level playing field,” Sachs recalled.

“I had a crack at it, it just sort of happened organically and luckily I had a family that were supportive and willing to take me to training and competitions.”

Troy excelled at able-bodied sports, making representative teams in soccer, athletics, volleyball and basketball before turning his attention to wheelchair basketball in his teenage years.

He began playing able-bodied basketball at the age of six, which was another reason why once Sachs got the hang of using his chair on the court success came quickly.

“I knew the concepts of the game, all I had to do was learn to use the wheelchair,” he explained.

It was not long before his first national selection and a debut at the Paralympics for an underdeveloped 15-year-old still yet to master the wheelchair manoeuvres.

“I was a kid in a candy shop,” Sachs said of the 1992 Paralympic Games in Barcelona.

“A little boy from Bulli going overseas and wearing an Australian uniform and playing in front of 20,000 people against Spain.

“Every single thing was a first, the experience and adrenalin was like a drug and I wanted more of it.”

A return to high school brought Sachs down to earth, but only momentarily before an offer to attend the University of Wisconsin on a scholarship.

“That’s when it got real,” Sachs recalled.

“It was like wow, someone from the US is going to fly me over and pay for me to go to school and I get to play wheelchair basketball.

The gym became Sachs’ sanctuary with endless shooting sessions and lifting heavy weights that fuelled his already healthy level of self-confidence on the court.

Amazingly his best game at the 1996 Paralympics was not the 42 points that put him in the Guinness Book of Records and propelled Australia to its first ever basketball gold medal, but the 28 points, 32 rebounds and 15 assists he had against the US in the semi-final.

Those performances secured a professional contract with the Dallas Wheelchair Mavericks in the wheelchair NBA losing only two games in his four years with a team that were feared around the US league.

“It was awesome to be recognised and sign a professional contract, and to play wheelchair basketball for a living” Sachs said.

Following a stint as co-captain of the Rollers from 1998 to the Sydney Games he then assumed the role himself from 2002-05, which included a silver medal at the Athens Paralympics.

“I celebrated big wins but it was still about planning and getting ready for the next one.”

Since his career finished in 2010 Sachs now has more time to spend with his daughter Gracie and son Pete, whilst building his company Team Sachs.

“I’m at peace with my career now and there are still some basketball goals,” Sachs said.

“I’m rarely in the chair, I’m quite content with what I did on the court and now my coaching keeps me connected.”

Sachs is completely aware of how momentous induction into the Sport Australia Hall of Fame will be given those who have been selected before him.

“Being inducted into the Sport Australia Hall of Fame achieves what I was trying to prove as a kid, that I was able with equality, acceptance, respect and a seat at the grandest of sporting tables,” he said.