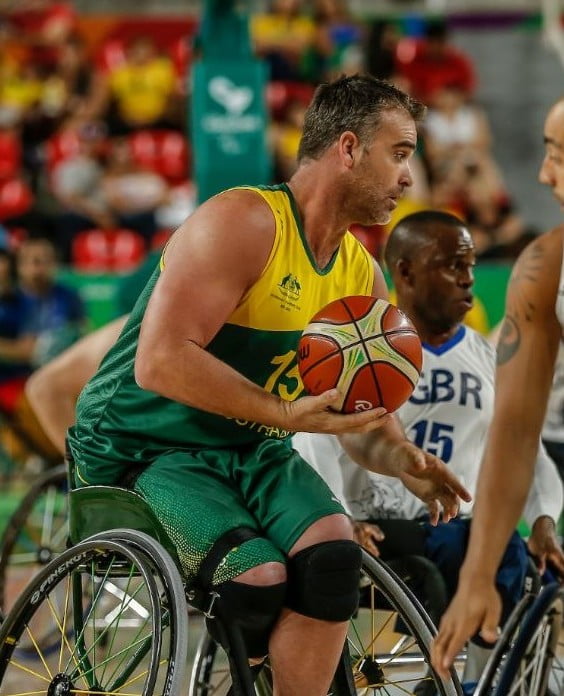 Australia has been eliminated from the gold medal race in men’s wheelchair basketball at the Rio Paralympic Games. The Rollers were crushed by Great Britain 74-51 in the quarter final.

The Australians led by two points at half-time but their challenge fell away markedly after that with Great Britain staging one of the great upsets in recent memory to advance to the semi-finals with 23-point victory.

It was conceivably the Rollers worst performance in a decade and on the biggest stage in the game.

“I thought we came out competitive in the first half, we stuck to our game plan and to be where we were at the half was excellent,” said coach Ben Ettridge.

“I think we just had one of those mental lapses that we’ve had in this tournament in the third quarter.

“All credit to GB, they did a great job but we were far from our best.”

The Rollers led by as much as seven points halfway through the second quarter but Great Britain fought back to trail 31-29 at the main break.

The Australians then failed to score on their first three possessions in the third term and Great Britain seized the initiative and never relinquished the advantage.

“Their defence was good but we’ve seen tougher along the journey and we just didn’t capitalise on our opportunities,” Ettridge said.

“But in saying that, they obviously came out and were putting chair on chair and making us shoot that little bit further out.”

As a result, Australia finished shooting at just 38 percent from the field compared with Great Britain’s excellent 49 percent.

Yet still, the Boomers deficit was only seven points heading into the final quarter. The British weren’t to be denied the glory though, producing a stunning 22-6 final quarter.

“Credit to them but for us it was just our inefficiency at the offensive end and then that leads to break outs,” Ettridge lamented as he considered how the game unfolded.

Britain’s Ian Sagar led all scorers with 26 points while he pulled down 10 rebounds as well.  His efforts were backed up by Phil Pratt’s 20 points and 10 rebounds.

For Australia, Shaun Norris shot 14 points and Tristan Knowles contributed 12 points but it clearly meant little as they, like their teammates, slumped in their chairs at the final siren.

Coach Ettridge spoke to his players immediately after the game, highlighting the shared disappointment among the group.

“There’s still one more game for us to play and we want to go out and play Rollers basketball and finish off the tournament better than we started.

Australia will play a classification game on Saturday.