The final positions on the 2016 Australian Paralympic Team were confirmed today, with seven athletes earning the honour to chase the first Paralympic medals in the sport of Para-Triathlon. 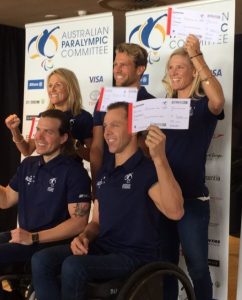 The APC announced the Australian Para-triathlon team for Rio 2016 today on the Gold Coast, bringing the final team size to 169 athletes from 15 sports.

With Para-triathlon appearing at the Paralympic Games for the first time in 2016, Australian Paralympic Team Chef de Mission Kate McLoughlin congratulated each of the seven triathletes, who now have an opportunity to take their sport to a new level.

“We are so delighted to welcome our Para-triathletes onto the Australian Paralympic Team for the first time. It’s been a long wait, but I know they’re ready to do our nation proud and I can’t wait to see them in action,” McLoughlin said.

“During the Rio Games, more viewers will see Paralympic sport than ever before thanks to the APC’s partnership with the Seven Network and it is this group announced today, who have the important responsibility to showcase the best of their sport to a whole new audience.”

Chaffey will arrive in Rio as Australia’s most experienced Para-triathlete, having competed at six World Championships since 2009 and winning five.

A police officer from Northern NSW, Chaffey said he would love nothing more than to convert his success at World Championship level into Paralympic gold.

“My goal for Rio is to win and do everything I can to get to the top of the podium. I’m focusing 100 per cent on giving my best to get the top result,” Chaffey said.

“I have had a lot of success in world championships, but to chase victory at the Paralympic Games is the most exciting thing.

“It’s still surreal to be representing Australia at this level. I never set out to be known, I set out to compete for me and to never stop improving. But to know the country is watching, I hope I can make them as proud of my performance as I will be.”

For Katie Kelly, her selection continues a rapid rise in the sport after she stormed to victory in her first World Championship appearance in 2015.

“Being selected to represent Australia at the Paralympic Games is an experience I never imagined might happen to me. It is an incredible honour and I’m most excited about being part of such an amazing team that has had a rich history since 1960 at the Paralympics,” Kelly said.

“The most important thing when I get to Rio is that I represent my country in the best possible light in terms of performance, I’m keen to do everyone proud back at home. I’m hoping to enjoy the moment it will be an incredible experience and I really want to be in the moment and celebrate that.

“I guess as a Paralympian you are first and foremost representing your country on an international level and you are part of a tradition and heritage of people that have petitioned for the rights of people with a disability to play sport and have had a strong involvement with the Paralympic movement.”

Kelly also knows her combination with Jones will be critical throughout the race in Rio, to be staged in and around the iconic Copacabana Beach.

“From that first moment Michellie and I met, we bonded really well,” Kelly said.

“She is passionate about triathlon and about giving back to the sport that has given her so much, we are great friends and she is a great guide and mentor to me on so many levels. After representing Australia at the 2000 Olympics she is looking forward to participating in the Paralympics as well.”

As a Paralympic discipline, Para-triathlon was first contested at World Championship level in 2005.

Since then, 42 athletes have represented Australia at the World Championships since, combining to win nine gold, five silver and five bronze medals.