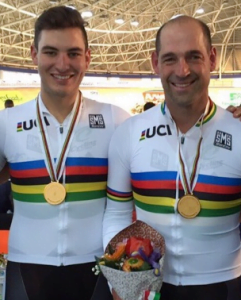 Having qualified second fastest earlier in the day in 4mins 12.568secs – just 0.04 of a second behind fastest qualifiers Spain – the competition for gold for expected to be close.

In the final Modra and Edwards blasted out of the start gate completing the opening kilometre in 1min 7.310secs taking an early eight tenths of a second lead.

Over the next two kilometres the Australian duo extended their lead heading in to the final kilometre with a two second advantage as they powered home to claim gold in 4mins 12.324secs. Over four seconds faster than Spain, the time just over one second outside the world record of Matt Formston and Mick Curran.

Modra and Edwards will now turn their attention to the sprint on Sunday.

2014 world champions and 2015 silver medallists Matt Formston and Mick Curran (NSW) set a time of 4mins 17.222secs over the four kilometres finishing fifth – an agonising 0.044secs from the ride off for bronze.

Having made her world championship debut on day one in the individual pursuit, New South Wales’ Amanda Reid claimed silver in the women’s 500m C2 time trial having covered the two laps of the track in 42.147secs.

In the women’s C3 500m time trial, bronze medallist from the individual pursuit held on day one Simone Kennedy (NSW) finished fourth in 44.992secs, missing the final spot on the podium by just over a second.

Darcy Thompson (SA) posted a time of 1min 22.013secs in the C1 1km time trial to finish fifth, after finishing tenth in the pursuit on Thursday.

While in the men’s C3 silver medallist from the individual pursuit yesterday David Nicholas (QLD) clocked a time of 1min 10.468secs for fifth position.

In the men’s C1-3 scratch a higher than expected number of entrants meant riders had to first qualify through one of two heats. After an aggressive race with several big attacks Davis Nicholas finished third to earn his spot in the final.

Photos with thanks to Cycling Australia