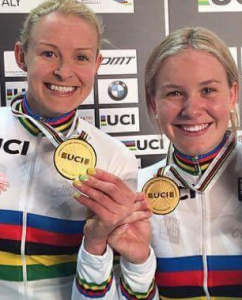 Sunday’s success took Team Australia’s medal tally to 14 – the second most of any nation behind Great Britain – which was comprised of four gold, five silver and five bronze. Eleven of Australia’s medals, including two gold, were won in Paralympic events.

“The overall standard was very impressive with all nations ramping up as the intensity builds towards Rio 2016 Paralympic Games,” said Peter Day, Para-cycling Performance Director & Head Coach Cycling Australia. “There were several International breakthrough performers who will definitely be in the mix for team nomination to the Australian Paralympic Team.

Leading the charge of the final night was Jessica Gallagher (VIC) and pilot Madison Janssen (QLD) who claimed a convincing victory in the women’s tandem sprint.

Kyle Bridgwood (QLD) emerged on top in the men’s C4-5 scratch race to claim his maiden world title on the track.

The third medal of the day came from Alistair Donohoe (VIC) who took bronze behind Bridgwood in the scratch race.

Victoria’s Jessica Gallagher and Queensland’s Madison Janssen claimed gold at their first track world championships with a dominant display in the tandem sprint.

The pair, who only began cycling together just seven months ago, broke the world record on their way to qualifying fastest with 11.045secs in the fying 200m.

They then proved too quick for Poland’s Anna Duzikowska and Natalia Morytko in the quarterfinals in consecutive heats, before defeating Yurie Kanuma and Mai Tanaka of Japan in two heats in the semi final.

In the gold medal ride against defending champions Sophie Thornhill and Helen Scott of Great Britain, Gallagher and Janssen were undeterred as they raced away to gold and the rainbow jersey.

“We are ecstatic to come away from the Championships with a world title, world record and a bronze,” said Gallagher, already a summer and winter Paralympian.

“The sprint world title was amazing, to not only break the world record in our flying 200m but to progress through the finals not dropping a heat was fantastic.

“Our coach Jason Niblett played a vital role in helping us tactics wise (having previously ridden as a tandem pilot before) so we knew we just had to execute. We knew it would be tough as British team have won the past two world titles but we were confident we had the ability to win.

“To put on our first rainbow jerseys was a moment we’ll both never forget.”

For Queensland’s Janssen, who finished fourth in the elite women’s sprint behind Anna Meares, Stephanie Morton and Kaarle McCulloch at this year’s Track Nationals, was delighted to steer her partner to gold just seven months after the pair began riding together.

“We are over the moon with our first world championships campaign, we came out with two medals and two personal bests. There isn’t much more you can ask for.”

Queensland’s Kyle Bridgwood produced a storming ride to claim gold in the men’s C4-5 scratch race, his first world title on the track.

Bridgwood took an early lap with Jonathan Gildea (Great Britain) leaving him well positioned to contest for the win.

“I was extremely surprised to take the win in the scratch race,” explained an elated Bridgwood. “I was just following moves which just ended up being the perfect moves to follow.”

Having rejoined the bunch following his first lap Bridgwood sensed another opportunity to take a second lap and move clear in to the lead.

“When I got back on the first time with the Brit, I then followed another and took another lap, that then made me race leader up one lap from everyone else.”

Finishing safely in the bunch earned Bridgwood the gold and his second world title following time trial success on the road last year.

“The overall experience has been incredible,” concluded Bridgwood who claimed silver in the individual pursuit earlier in the week.

Defending champion Alistair Donohoe (VIC) sprinted to bronze and his third medal of the championships following silver in the individual pursuit and bronze in the time trial.

In the quarterfinals eventual winners Neil Fachie and Peter Mitchell (Great Britain) were too quick for Modra and Edwards. While the Netherlands’ Tristan Bangma and Teun Mulder were too strong for Kennedy and Yallouris.

Kennedy and Yallouris won the ride off for seventh ahead of Modra and Edwards.