The 2015 Para World Sailing Championships will see 142 sailors from 31 nations compete across three Paralympic events in Williamstown, Melbourne, Australia from 27 November to 3 December. It will be the largest Paralympic World Sailing Competition in the lead up to the 2016 Rio Paralympic Games. 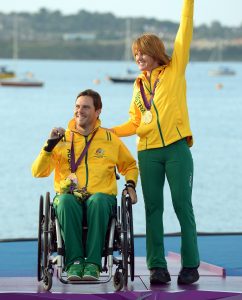 Racing out of the Royal Yacht Club of Victoria (RYCV) in Williamstown, all five crews of Australian Sailing Team’s (AST) and Squad (ASS) Paralympic boat class sailors will be at the start line and are aiming to defend their 2014 Nation’s Cup win as the team prepares for the 2016 Rio Paralympic Games (7 – 18 September 2016).

With less than a year out from the Paralympic Games the Australian Sailing Team is looking strong after multiple top podium finishes across the international season.

After a short break following London 2012 the pair were back in the SKUD18 at the 2014 World Championships in Nova Scotia, Canada where they took their first world title together. Since then, the pair have been a mainstay at the top of the podium in the last 12 months winning gold at Sailing World Cup Melbourne and Miami as well as the Delta Lloyd Regatta in Medemblik, the Netherlands.

“We’re expecting to keep getting better at each regatta we do and want to sail better every day. Melbourne is one of our selection regattas for the Paralympic team so it’s very important for us and it’s just great being home for a major regatta. The RYCV is doing a great job hosting this event and we can’t wait to start racing on Saturday,” Daniel Fitzgibbon said about the event.

Sailing on home waters, holding an unbeaten run, the odds look heavily stacked in the Australians favour and crew Liesl Tesch remains confident, “It’s going to be great to race on familiar waters on beautiful Port Phillip Bay and Melbourne is one of our favourite waterways in the world.

We’re looking forward to lining up with the best teams in the world in front of our home crowd and the event will be another great positive step in our Paralympic preparation. And no pressure on us as the defending World Champions…. well, the big target will be on our back after our Paralympic Gold medal first, then 2014 World Champion and our season so far, so watch this space.”

And with reference to Australia’s second SKUD18 crew of Ame Barnbrook (NSW) and Brett Pearce (NSW) she added: Our team mates and Aussie competitors are sailing very fast, and it’s important we get a very good result here in Melbourne in the lead-up to the Rio 2016 Paralympic Games and to secure our selection for the team!”

It is the first time that Australia is hosting the Para World Sailing Championships and Tesch is excited to race in front of a home crowd: “It’s absolutely fantastic to have the Worlds Championships here in Australia and it’s quite an honour to have it on beautiful Port Phillip. It will be the chance for Australians to have a look at top level, fantastic racing. Best of all, it’s great to have friends and family around for the Para Worlds.”

Also, it’s great that everyone else has had the challenge of shipping their boats to our side of the world, and also enduring the long flights and the jetlag we usually suffer,” she added laughing.

Of the 18-teams in Williamstown, just four remain together following the London 2012 Paralympic Games and that experience could prove vital in Williamstown.

Alexandra Rickham and Niki Birrell (GBR) are the most decorated SKUD18 sailors in the fleet and hold five world titles, 2009, 2010, 2011, 2012 and 2013 as well as London 2012 bronze. In recent times they have played second fiddle to the Australians but in Fitzgibbon and Tesch’s backyard, there is no better arena to beat them on the Road to Rio and they will be up for the challenge.

Paralympian Matt Bugg finished fifth in the 2.4mR at last year’s IFDS World Championships and has continuously worked his way up the ranks over the international competitions this season.

At the ISAF Sailing World Cup in Hyères Matt Bugg won a silver medal and went on to win bronze at the Delta Lloyd Regatta making it his best European season so far.

Melbourne will be an essential part in his 2016 preparation: “I’m happy with where I am in my preparation for the Rio games next year and with just under a year to go most of the technical development has been done and it’s now all about the racing and competing against the top 2.4mR sailors in the world. Melbourne will be a great opportunity to do this with all of our top sailors having made their way down under,” Matt Bugg said.

Defending champion, six time Para World Champion and dual Paralaympic medallist Heiko Kroeger of Germany will be one of the sailors to beat with the German having finished on the podium at every regatta he has sailed at since the London 2012 Paralympic Games.

London 2012 Paralympic gold medallist Helena Lucas (GBR) is yet to add a world championship title to her accolades with three bronze and two silver medals to her name.

2014 World Championship bronze medallist Colin Harrison (WA), Russell Boaden (WA) and Jonathan Harris (NSW) qualified the Sonar last year for the Rio 2016 Paralympic Games and have continuously finished on the podium since then.

Weymouth was a return to the London 2012 Paralympic venue for Colin Harrison and Jonathan Harris who had some unfinished business there after missing out on the podium in 2012. But after a rebuild of the crew with 2008 Paralympian Russell Boaden back on the team, they are in strong form and are looking forward to Melbourne as an important preparation on the road to Rio.

“Having won two gold and a silver on the European circuit this year, things are coming together nicely at the right time in the lead up to Rio next year and the Para Worlds will be another important step along the way” Jonathan Harris said.

“It will be great to race on home waters and we are anticipating some great racing against our main competitors for next years games.”

Amongst others, the Australia’s Sonar team will be lining up against the current world champion team from France Bruno Jourdren, Eric Flageul and Nicholas Vimont Vicary, as well as Germany’s Beijing 2008 Paralympic Games gold medallists and London 2012 silver medallists Jens Kroker, Siegmund Mainka and Robert Prem.

Registration, measurement and classification will run for three days in Melbourne from 24 November. The Opening Ceremony will take place on 27 November with six days of racing commencing on Saturday 28 November. A single race on Thursday 3 December will bring the regatta to a close followed by the prize giving.