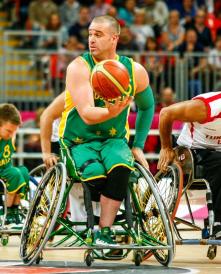 The Australian men’s wheelchair basketball team, the Australian Rollers have gathered at the Western Australia Basketball Centre for their first camp following their World Championships win in July.

The selected squad of players have already begun the long road to Rio 2016, and the group of 18 athletes will form the core of the Australian Rollers team that will go a long way to representing Basketball Australia at the IWBF Asia Oceania Qualifiers in Chiba, Japan in October 2015.

The player selections are based on performances at the Incheon IWBF World Championships, the player commitment and work ethic in the daily training environment, program performance history, their individual and team performances throughout the 2014 NWBL season and daily reporting to the Athlete Management System.

Rollers Head Coach Ben Ettridge commented on this camp, saying “I’m very excited to get the Rollers group together. This is our first camp since the World Cup, and we have turned our focus on the IWBF AOZ qualifiers in October for this camp.”

The list of the Rollers athletes selected to attend the Basketball Western Australia camp include;