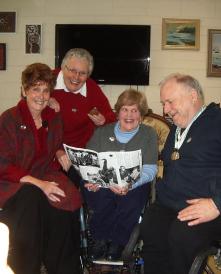 Two valuable contributors to the Australian Paralympic Movement have been recognised in the Australia Day Honours List.

Watts, who served on the Board of the Australian Paralympic Committee from 2002 until 2008, was recognised for his significant service to people with a disability, particularly to wheelchair sports, and to health sciences education over a period spanning more than three decades.

Among Watts’ major accomplishments in disability sport, was the Australian Wheelchair Tennis Association he helped to establish. He was also instrumental in launching the Sydney International Wheelchair Tennis Open, which continues to be held annually.

For Tyler, the OAM recognised a long and distinguished career in nursing, particularly in the field of spinal injury rehabilitation.

During the 1968 Paralympic Games in Tel Aviv, Janet was appointed as a nurse on the Australian Team consisting of 32 athletes, almost all of whom had a disability resulting from a spinal injury. During the Games, she was part of the medical team which provided support and care to the Australian Team which achieved great success, winning  38 medals from seven sports to finish fourth on the medal tally.