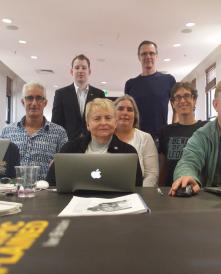 Para-sport articles on Wikipedia created through a joint initiative by the Australian Paralympic Committee (APC) and Wikimedia Australia are achieving viewing rates of more than 1.4 million annually.

The Wikipedia articles have been written by a group of volunteer contributors as part of the Australian Paralympic History Project known as ‘HOPAU’, which aims to capture, manage and preserve the history of the Paralympic movement in Australia.

Since January 2011, 814 articles have been published and mostly centre around Australian athletes, officials, results and the nation’s involvement in each of the Games.

An analysis conducted in October 2014 found that the articles were viewed 117,941 times during the month – an indicator of the growing interest in Paralympic sport and Australia’s Paralympic athletes, said APC Knowledge Services Manager Tony Naar.

“When we created this program in collaboration with Wikimedia Australia in 2011, there were almost no articles about Paralympic sport or Paralympic athletes,” Naar said.

“More than 600 articles were created before the London 2012 Games, and these were viewed almost 2 million times during the Games period, showing the interest in Paralympic sport and the need for information to be accessible to all.”

Another finding was that articles about some of Australia’s earliest Paralympians continue to be regularly viewed. During October 2014, the Wikipedia page dedicated to 1960 Paralympian Kevin Coombs was viewed 267 times.

Almost 8% of the Paralympic project articles have achieved a rating of ‘Good Article’ or higher, compared with just 0.6% of Wikipedia articles overall.

The APC is looking to expand this volunteer group to improve the depth of articles and meet its goal of including photos with every Paralympic article.

Potential contributors should contact Tony Naar on 0418 684 108 or tony.naar@paralympic.org.au for information on how to become involved with the project.

Highlights of the analysis include: