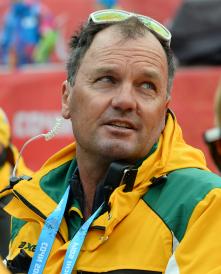 After more than two decades of involvement with skiers with disabilities and 11 years as head coach of the Australian Paralympic Winter Team, Steve Graham will end his tenure with the team later this month.

Most recently he led the 2014 Australian Paralympic Team to Sochi, where the Team won two bronze medals and finished 19th on the medal tally – a better result than many traditional winter nations.

“Steve has brought an enormous amount of success to the APC’s winter program over a long period of time,” said Australian Paralympic Committee CEO, Jason Hellwig.

“His love for the sport and his commitment to the athletes has been there for all to see, and he will stand down as one of the nation’s most successful elite coaches.”

“The program is now preparing to begin a new era. Along with Steve, the APC recognises that there are improvements that need to be made to enable us to achieve further success. This is why the decision has been made to make this change and move the program in a new direction.”

It was 1993 when Graham became involved with Paralympic winter sport, 10 years after he first began coaching able-bodied skiers.

Graham had personally coached Australian Winter Paralympic legend Michael Milton on and off since the early 1990s before his career took the next step when he was officially appointed head coach of Australia’s Paralympic winter program in 2003. The appointment was made on the back of Milton’s four gold medal clean sweep at the 2002 Games in Salt Lake City.

In the years that followed, Graham’s coaching career was signposted with highlights, including more medals at the 2006 and 2010 Paralympics, the growth in numbers of Australian female Winter Paralympians, and ending with the bronze medal won by Toby Kane in Sochi, the only medal won by a one-legged skier from any country in the men’s standing classification.

“As a 20-year-old, I went travelling and had gotten into skiing and into coaching. From there I ended up coaching the Australian able-bodied team and was coaching at the Thredbo Race Club when I met Michael (Milton) and became involved in coaching him and the other Para-athletes,” said Graham.

“The vision-impaired girls are a real strength for us and we’ve got Mitch Gourley who has a tonne of talent and is young enough to carry on the mantle of Australia punching above its weight in winter sport,” said Graham.

“For me personally, in some capacity I would like to help keep one-legged skiers at the Paralympic Games. With both Cameron Rahles-Rahbula and Toby Kane now retired, there aren’t many one-legged skiers left who can compete against two-legged athletes.

“I think the image of a person with one leg skiing down a mountain is a really powerful one for the Paralympic movement. The skill involved and overcoming the barriers that snow conditions can throw at you with one leg exemplifies what Paralympic sport is about and I would hate to see that group of skiers be no longer competitive.

“The sport is getting tougher and tougher, and not necessarily fairer and fairer and we just have to be really astute in addressing that. The movement has changed immensely in the time I’ve been involved.

“That change has been really good to be part of and to see happen, and with the foundation that has now been set, the future of winter sport in this country is bright.”

The APC’s Performance Manager, Winter Sports, Pim Berkhout, is now overseeing the recruitment process for the Head Coach role, with an appointment to be announced in due course.