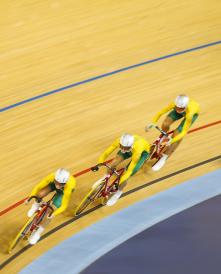 Team Australia has finished as the most successful country with 17 medals, including five rainbow jerseys, at the 2014 UCI Para-cycling World Track Championships in Mexico.

The final two days of competition were headlined by Sue Powell’s tremendous performance to win the women’s C4 3km individual pursuit, plus Jayme Richardson’s second gold medal of the Championships in the C1 category.

Powell (3:56.969) broke her own world record in qualifying by seven seconds, with fellow Australian Alexandra Green (3:57.393) also going under the old mark to set up an all-Aussie final.

Powell went even faster in the final, eclipsing her new mark by almost one second, crossing the line in 3mins 56.135secs to take the gold over Green (4:00.06).

Jayme Richardson claimed her second rainbow jersey in as many days after posting 4mins 43.152secs to win the women’s C1 3km individual pursuit.

In the Tandem sprint events, the Australian pairings of Keiran Modra and Jason Niblett (Pilot) broke the world record in flying 200m qualifying after posting an amazing 9.877secs.

However, in a mirror of the time trial event from the second day of competition, their time was pipped by Great British combination of Neil Fachie and Peter Mitchell (pilot) (9.711).  The British pair then took gold over the Australians in the final in two straight heats.

It was an almost identical result in the women’s event, with Australians Brandie O’Connor and Breanna Hargrave (Pilot) setting a new world mark with 11.112secs in their qualifying ride.

However it was short-lived with Great Britain’s Sophie Thornhill and Rachel James (Pilot) bettering their time by .3 of second (10.854).  As per the men’s result, the British duo went on to take the gold in straight heats.

Australia’s 17-member team battled over 100 of the world’s best cyclists from 30 nations during the Championships will be held at the Aguascalientes Velodrome from April 10-13.