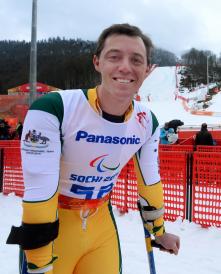 Toby Kane finished his outstanding Paralympic career today on both a happy and sad note.

The three-time Paralympian book-ended his career superbly with a Bronze in Super-G at the 2006 Torino Winter Games as a 19-year-old, and then a Bronze in Super Combined in 2014 in Sochi as a 27-year-old.

But his last event as a Paralympic skier ended with a disappointing DNF (did not finish) in today’s Giant Slalom at the Rosa Khutor Alpine Centre. It is not Kane’s favourite event and the snow conditions today did not suit one-legged skiers either.

“I was trying hard to take it on but just slipped out (off course) down the pitch. Any time you don’t finish is not a great day, but I’m still smiling,’’ Kane said.

“They (course workers) have done a fairly good job but the snow set up was a fair bit  harder than the last couple of days.

“Obviously we’re running earlier in the day. But the problem then is when it’s bumpy and hard it’s worse than being bumpy and bit softer for me.

“G.S. is always a fair challenge on one ski. A couple of the Canadian guys simply chose not to ski today because it’s G.S.

He admitted some residual tiredness after his podium finish in the Super Combined yesterday – his Super-G run time combining with his Slalom time for bronze behind Alexey Bugaev (Russia) and Matthias Lanzinger (Austria), who both use two skis. Lanzinger has a prosthetic left leg but chooses to ski on two skis. Kane’s amputation (to his right leg due to a car accident as a two-year-old) is much higher and he uses a single ski.

“I’m pretty worn out but I think everyone on is – staff and athletes alike. It’s a long two weeks because you start three days before the Opening Ceremony before anyone knows you’re here and then you train right through as well as your five events,’’ he said.

“But I’m really happy with the way I skied here throughout.’’

Kane finished 6th in the Downhill,; DNF in Super-G, 4th in Slalom, Bronze in the Super Combined and DNF in Giant Slalom.

“I’m so happy about yesterday and I’m really glad that I could get myself and the team across the line,’’ Kane said. “It’s going to take a while to understand how I miss skiing.

“When it comes to Australian winter time and then in December when I’m packing to get ready to go away (and compete in World Cups) I’ll feel it more.

“It’s been a huge, huge part of my life. I started travelling with the development team when I was 12 and have travelled every year since,’’ Kane said.