From Sochi to Pyeongchang with gold in our sights 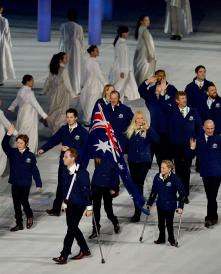 Even before the snow started to melt in Sochi, the Australian Paralympic Committee (APC) was planning for the 2018 Games in South Korea.

Despite the burden of retirements by Sochi bronze medallist Toby Kane, a three-time Paralympian, and Cameron Rahles-Rahbula, a four-time Games competitor, the outlook for the 2018 Games in Pyeongchang is bright.

The APC appointed its first ever winter sports high performance manager, Dutchman Pim Berkout, last November. He was in Sochi to watch and analyse all the performances so programs can be set in place for the next four years.

“We planned for Korea months ago. We are in motion now for 2018,’’ said Chef de Mission in Sochi, Chris Nunn.

“We need to attract really good quality athletes. We have noticed how many athletes from track and road, who had already won (Summer) medals, are here.

“It’s not always about technique in skiing it is also about the ability to get the job done and having the right sized motor.’’

The Australian team of nine athletes and two guides certainly had a lot of ticker in Russia. They lost a national squad team-member in Matthew Robinson just three weeks before the Games started, after he succumbed to serious head and neck injuries from a snowboard race in Spain and died while being medically evacuated back to Australia for further treatment.

Then the cast of nine entered in the six alpine events in Sochi (five skiing, one snowboard) was reduced to seven with Rahles-Rabula (fractured shin) and snowboarder Joany Badenhorst (dislocated kneecap) injuring themselves before competition started.  Both had to withdraw.

Regardless the seven remaining tallied five top-5 finishes (including the two medals) and six top-10 finishes.  Kane won a bronze medal in the super-combined and Jessica Gallagher won a bronze on the final day of competition in the giant slalom.

“We came here under the most difficult of circumstances that I’ve ever seen coming into a major Games,’’ APC chief executive and Chef at the London 2012 Games, Jason Hellwig said.

“But our guys found a way to keep doing their jobs and keep smiling. Then the results came and it was the most wonderful release for everybody.’’

Hellwig praised Nunn’s efforts in pulling the athletes, coaches, medical and administration staff together into a united and committed team.

“If there was an award at the Games for the best Chef, then this guy gets it,’’ Hellwig said.

Australia took six days of disappointment and near misses in results before the two medals came on Day 7 and 9 of the nine-day program.

“It was right in our range. We wanted to win between two and five,’’ Hellwig said. “But they were two of the most rewarding medals I’ve ever been involved in.

“We’d be lying if we didn’t say we wanted a gold medal. We put ourselves in a position to do that with several top-five finishes. But we didn’t so that’s disappointing,’’ he added. “I tell you what, we’re absolutely determined to get one in four years’ time.’’

Nunn said the pride Australia took in simply getting onto the medal tally was enormous. Strong winter sport countries like Italy (no alpine medals) and Switzerland (one) were behind the Australians.

“Certainly there’s no question being in Australia makes it harder. It re-emphasises the fact we need to travel with relatively small teams which are big on quality,’’ Nunn said, looking forward to the pre-Korean campaign.

“We’re not like Germany, Austria, Sweden or most of Europe when you can do this (ski) on the weekends or after work. We’ve got to move overseas to do it.

“It’s a massive commitment not only from the athletes, but the guides, the staff. There’s a massive amount of equipment involved when you’re a ski racer.’’

So the two major issues moving forward for the APC are: (1) Attracting more funding and corporate backing; (2) Finding new winter talent among athletes.

“Medals are great because they are the ultimate reward not just for an athlete and guides, but to everyone who supports them,’’ Hellwig said.

“For the Australian team, we are here because of the support of the Australian people through public donations and they expect their teams to be successful. We don’t shirk that responsibility.

“But finding more funding revenue is the perennial challenge for Paralympic sport in Australia,’’ Hellwig said.

“We are really grateful for the support we get from the government. We deliver a great value-for-money  government investment and we’re looking forward to further talking to them on how they can not only continue to support us, but grow that support.

“I think the corporate support will come. But we don’t have a god-given right to a cent from anybody. We’ve got to go and earn it by the way we perform.’’

Australia has medalled at every Winter Paralympics since 1992 Albertville. But the last gold medals were back in 2002 at Salt Lake City. New talent needs to be sourced.

“Every Games athletes retire. So we expect that,’’ Hellwig said.

“But have a look at what we’ve unearthed here. Snowboarder Joany Badenhorst was doing times in training that would have put her in bronze medal contention and she’s 19.

“Benny (Tudhope) finished top-10 in snowboard and he’s 14. There’s a stunning future there.

“Tori Pendergast is our first female sit-skier and at her first Games and she has two top-10 finishes. She’s only 23.

“We’ll talk to Mitch (Gourley) because I know he’s undecided about his future. He loves racing; he loves competing. He was a reasonable margin off the pace setters in Vancouver but he was damn close to a medal here in Sochi,’’ Hellwig said.

“He’s only 22. So we want to keep him in the sport because he’s still developing. In four years time he’ll be in great shape.

“With Jess and Mel (Perrine) in vision-impaired and they are only at their second Games. As skiers these guys are all very young. So we’ve got a basis from within this current team that we can work with to go forward.’’

Nunn said the APC had an excellent Talent Search program, but since the Sochi team came from two states – NSW and Victoria – those two sports institutes would be enlisted to help identify snow athletes. The Olympic Winter Sports Institute would also be utilised, he said.

“We need to be really targeted in our approach to getting medals because that’s what we’re judged on,’’ Nunn said. “We won’t shy away from that. We’ll get out there and be pro-active.’’

One sport Nunn expected no problems with in recruitment was Snowboard. There was only one event in Sochi – snowboard cross for only one disability class (lower limb). There will be more classes added for South Korea.

“That sport will take off,’’ Nunn said. “It’s a sexy sport that’s different to alpine. There’s music blaring, there’s a different vibe. There are kids all over Australia that will be attracted to it.

“We’ve got to find a few more Bennys and we’re away. We couldn’t have a better ambassador than him and we’ve got him right now.’’

Tudhope carried the flag in the Closing Ceremony at Fisht Stadium, before 40,000 spectators.

•    Australia finished 19th overall (across all 5 sports) competing in just 1 sport (Alpine)
•    Australia finished 11th in Alpine
•    Only 10 countries won more than 5 medals
•    Russia won 30 of the 72 gold medals available across nine days of competition. The host country won 80 medals in total breaking Austria’s record of 70 at the 1984 Winter Games.