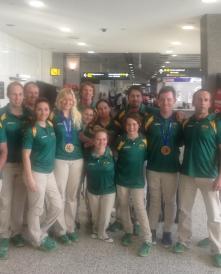 The Australian Paralympic Winter Team has arrived home from Sochi today with two bronze medals and a wealth of experience under their belts.

The Team of nine athletes and two sighted guides were glad to finally be back on home soil at Melbourne Airport after four months away from family and friends training and competing in the northern hemisphere.

After a week of injuries, close calls and bad luck for the Australian Team, alpine skiers Toby Kane and Jessica Gallagher, with her guide Christian Geiger, won Australia’s two bronze medals in the final three days of competition to see the Team finish 19th on the medal tally.

Skiing at his final Games, three-time Paralympian Kane suffered two crashes in the super-G and giant slalom, and a frustrating fourth place in the slalom, before he pulled off a remarkable comeback in the men’s standing super-combined to win bronze.

It was the second Paralympic bronze medal for the 27-year-old medical student, who won bronze in the super-G at his first Paralympic Games in Torino 2006.

Kane was one of 12 male alpine skiers in Sochi to compete on one leg and he, along with teammate and fellow one-legged skier Cameron Rahles-Rahbula, will now retire. At the Sochi closing ceremony, he was honoured with the prestigious Whang Youn Dai Achievement Award, awarded by the International Paralympic Committee to the male and female athlete at the Games who most exemplify the Paralympic spirit.

Australia’s second Sochi bronze medallist, Jessica Gallagher, did not get her Games campaign off to a great start either, failing to finish her pet event, the women’s vision-impaired slalom.

But the 28-year-old, together with her sighted guide Christian Geiger, put down a magnificent run in the final hours of the Games to win her second Paralympic bronze medal.

In Vancouver 2010, Gallagher became the first Australian female to win a medal at the Winter Games, and then in London 2012, became Australia’s first female athlete to compete at both a summer and winter Paralympic Games.

Chris Nunn, Chef de Mission for the 2014 Australian Team said that despite a number of setbacks throughout the campaign, including two competition-ending injuries to Cameron Rahles-Rahbula and Para-snowboarder Joany Badenhorst, the spirit of the Team was immeasurable.

“There have been times during this campaign when our Team has been really up against it. But the maturity and positive attitude they’ve all displayed at some difficult times has been truly amazing,” said Nunn

“It’s been a great honour to lead a team full of such wonderful people in the athletes, the coaches and the support staff.

“We’ve learnt a lot from this Games and the APC will now work on how we can improve the winter program for future Games.”