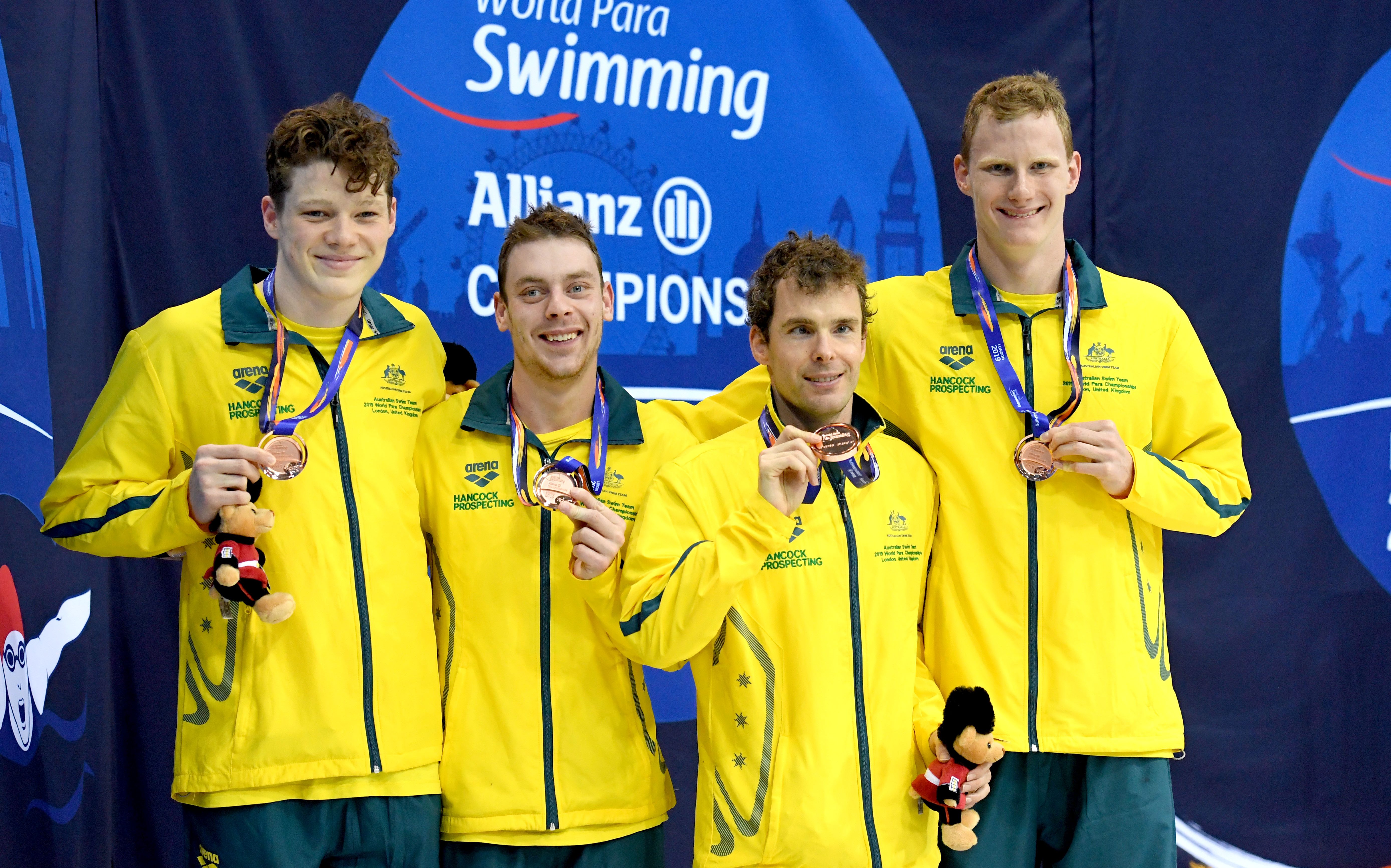 With their teammates proudly donning the iconic green and gold and cheering in grandstands, the Dolphins’ men’s 4x100m freestyle 34 Points relay team captured bronze on the final night of the 2019 World Para-swimming Championships, marking Australia’s last medal of the meet.

As the Aussie contingent in the crowd nervously held their breath, the quartet of Matt Levy, Ben Popham, Timothy Disken and Rowan Crothers fought extremely hard to pull back initial leads from their competition and hold on to secure the podium finish. Levy dived off the blocks first and held strong, with Popham and Disken digging deep in the middle stages to give Crothers the best chance to nab a piece of silverware. Touching in 3:49.79, it was a close race for silver, with Ukraine placing second in 3:48.83, while Italy took gold in 3:46.83.

It was Crothers’ third bronze medal of the meet, and he couldn’t think of a better way to cap off his World Championships campaign.

“All the boys really stepped up and gave it their best shot,” Crothers said. “We beat our entry time, which is awesome, and we’ve all had a great meet. This is a great way to top it off.”

Echoing his teammate’s emotion, Popham’s smile could be seen from the grandstands.

“Finishing off racing with the boys, you just can’t beat it,” Popham said. “There was so much energy in marshalling, and it was just a once-in-a-lifetime experience. This meeting has already been really special for me, and this is no exception.”

Prior to swimming in the relay, Disken featured in a stacked field for the men’s 50m freestyle S9 final. Hitting the wall in 26.44, he placed eighth, with Italian Simone Barlaam breaking the world record to capture gold in 24.00.

Swimming side-by-side in lanes two and three, Taylor Corry and Ruby Storm fought hard in the women’s 100m butterfly S14 final. The duo, who were part of the bronze medal winning S14 relay team on night four, touched one after the other in fourth and fifth. Corry just got the better of her rookie teammate, breaking the Oceanian record in a new personal best time of 1:07.30 to Storm’s 1:08.03 – which was also a personal best for the 15-year-old.

After also claiming a bronze medal as part of the S14 relay team, Liam Schluter lined up in the men’s 100m butterfly S14 final. In a challenging field, the 19-year-old clocked a time of 59.10 to break the Oceanian record by 0.23 seconds and place seventh.

Having claimed a silver medal last night in the men’s 150m individual medley SM3, Ahmed Kelly returned to the pool the following night to take his place in the men’s 50m breaststroke SB3 final. Posting a time of 55.06, Kelly finished sixth overall. Italy’s Efrem Morelli claimed the gold in a new world record time of 47.49.

Katja Dedekind recorded another solid swim, putting yet another personal best on the board – this time in the women’s 50m freestyle S13. In a blanket finish that saw less than one second separate first from eighth, Dedekind posted 28.04 to finish seventh, just 0.68 seconds behind the gold medallist and shaving 0.39 from her personal best.

Speaking post race, the 2016 Paralympian said she was happy with the result, in what was a tough final.

“The race felt faster than this morning and two PBs [personal bests] in one day is phenomenal,” Dedekind said. “I’m just stoked about it.

“I’ve always said that if I PB at an event then I’m going to be really happy, because it means my hard work is paying off.”

Already with a gold medal to her name this week, Tiffany Thomas Kane took her place in the women’s 50m freestyle S7. The splash and dash was fast and frenetic, with Thomas Kane placing seventh overall in 35.31.

Australia’s final individual event of the meet saw Grant ‘Scooter’ Patterson push himself all the way to the finish line in the men’s 200m freestyle S3. Swimming 0.26 seconds faster than his heat swim, the Cairns local placed seventh in 3:58.30.

In the last event of the Championships, Thomas Kane, Ella Jones, Jasmine Greenwood and Ellie Cole lined up for the women’s 4x100m freestyle 34 points. In a gallant effort, the women recorded a 4:32.06 to place fifth overall.

After seven days of fierce competition at the London Aquatics Centre, Australia placed 17th on the medal table, with two gold, seven silver and 14 bronze.